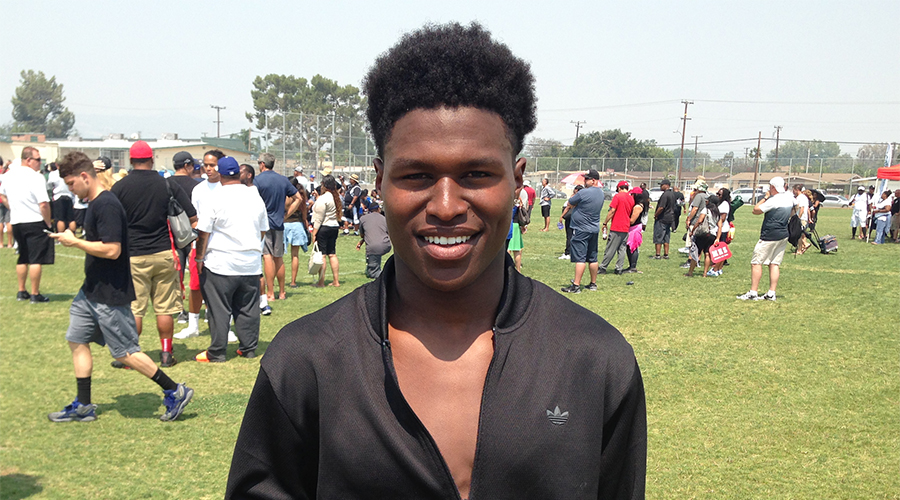 Among the most noteworthy participants who undoubtedly grabbed their attention was one prospect with whom they’ve just recently jumped back into contention for, elite Class of 2017 two-way star Darnay Holmes (Calabasas, Calif./Calabasas).

The big-name talent received an offer from USC over two years ago, but with the highly publicized dismissal of former head coach Steve Sarkisian, and an aura of perceived instability surrounding the program in the immediate aftermath, the Trojans faded from consideration – until recently that is.

“Just with the coaching staff before, there was a lot of uncertainty,” said Holmes, who stands 5-foot-11 and 185 pounds, “but now they have the coach that they had before when they had Kevon Seymour playing at his best, [Defensive Coordinator Clancy] Pendergast, and he had all of these guys balling then. They definitely have a good coaching staff over there now. I like Coach Helton, and one of the assistants, Gavin [Morris], he’s a funny guy who I always like to be around. So, I definitely love what they have going on up there.”

Holmes’ change of heart was aided significantly by an unofficial visit that he decided to take to USC a little under a month ago.

“It was a game-changer for the relationship that I have with Tee Martin and Ronnie Bradford,” Holmes said. “Especially Tee Martin, just to see his resume, and to see what he does for his receivers and these young guys, showing them that it doesn’t matter who they have, they’re going to bring guys in each and every year to compete. He isn’t the kind of guy who is going to play favorites.”

Primarily categorized as a cornerback prospect by most recruiting services, Holmes is being targeted by the Trojans to play on both sides of the ball, which explains the heavy involvement of Martin – the USC wide receiver coach – in his recruitment.

Judging by Holmes’ performance in the one-on-one portion of the Sound Mind Sound Body camp, where he dominated at receiver and at cornerback against some highly rated competition, he certainly appears to have the tools to make an impact at both spots on the next level.

“They’re definitely looking at me as an athlete type of guy for sure,” Holmes said of the Trojans. “They said that I have some attributes just like Adoree’ [Jackson], but I can’t compare my game to his game. He’s one of the greatest of our generation. But I’m trying to build my brand to be even better than him.”

One thing working in the Trojans’ favor is Holmes’ relationship with a number of past and present fellow Pasadena natives who went on to USC, including current safety Marvell Tell, as well as Seymour, now with the Buffalo Bills.

“They’re definitely big role models for me,” Holmes said. “I always talk to Kevon. He has a baby on the way, so I’m glad to be getting a new nephew. No doubt, having him, Tyler Vaughns, Trevon Sidney…all of these Pasadena guys, the pipeline to USC means a lot.”

While the Trojans are certainly in a much better place today for Holmes than they were just a couple of months ago, the USC staff still figures to have ground to make up as he’s already developed a close relationship with a number of the staffs at other schools.

“I don’t have a top list or anything,” Holmes said. “There are a lot of schools that I’m interested in like Nebraska, Oregon, Washington, Michigan, USC, UCLA, Ohio State, I just got an offer from Michigan State…all of these schools that have contacted me on the daily, I’m definitely interested. I’m going to take as many visits as I can as unofficials, and the officials I’m going to try to go to schools that I haven’t been to.”

Following his participation in The Opening Finals in early July, Holmes has plans to check out some of the Florida schools later this summer, and he’s already set up official visits in the fall with Nebraska, Ohio State and Michigan.

He does not foresee himself taking an official visit to USC due to its close proximity to home, but he does plan to take a number of unofficial visits there for the Trojans’ home games.

When Holmes visits different schools, whether it be officially or unofficially, there are some specific factors that he’s going to be taking into account with an eye toward his long-term decision.

“How I think the school will help me build my brand, and will they give me a degree that I will be able to use in the long run?” Holmes said. “I also want a college that will be able to prepare me for the NFL, a place that has great hospitality from the fans, a place where the coaches love their players – just a place that is like a big home honestly.”

And while Holmes isn’t close to making a commitment to any school at this time, he has no intention of stretching the process out until the very end.

“I’m definitely not going to wait until Signing Day,” Holmes said “I’m not one of those guys who is going to pick and choose hats and all of that. It’s definitely going to be before Signing Day – hopefully at the Army game or before the Army game, or at the end of my season, or even in the middle of the season.”