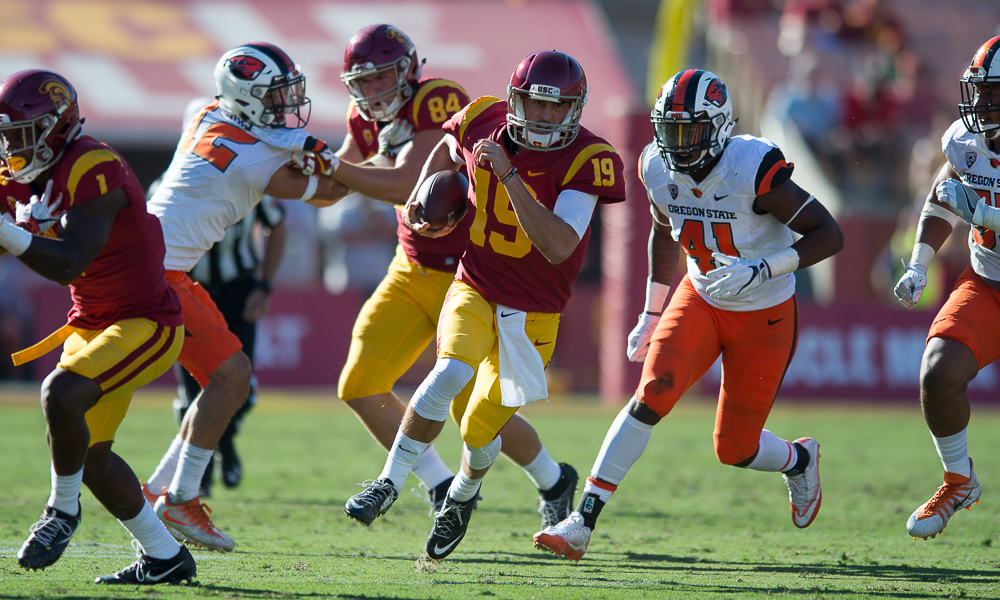 With the 2018 USC football fall camp practices about to start on Friday here are some of the key storylines to follow:

At every level of the defense the Trojans return at least one senior who is up for a pre-season national honor; from Porter Gustin up front to Cameron Smith in the middle and the duo of Iman Marshall and Marvell Tell in the secondary. In fact, it’s not too often that the Trojans have that many talented players say no to the NFL draft in order to return for one more year of college, and the results should show on the field.

Smith returns for his fourth year as a starter and he’s as steady as the come, a true “coach” on the field. He’s led the team in tackles two years in a row and is expected to be named a captain for the second year in a row. Gustin is considered one of the “freaks” of college football because of his unique combination of size and strength but he also has a new outlook as he comes off an injury that robbed him of much of the 2017 season, look for him to bounce back in a big way this fall. Marshall is another one who has started since his freshman year and he received praise from the coaches for the way he played this spring in terms of raising his level of play, while Tell is a physical enforcer from the safety spot at the back end of the defense.

Of course, those are the only experienced players who come back for a third year in Clancy Pendergast’s system. Ajene Harris has established himself in the nickel corner role, John Houston played well in the second half of 2017 at will linebacker, while Christian Rector and Malik Dorton provide leadership along the interior of the line.

Who will win the QB job?

This is the storyline that will get the most headlines in camp and it certainly offers an interesting twist compared to past quarterback battles. In spring you had sophomore Matt Fink and freshman Jack Sears, neither of whom had done much of note while Sam Darnold was entrenched as the USC signal-caller. Fink will be remembered for his 51-yard touchdown dash against Oregon State while Sears is probably most well-known as the QB who took over for Darnold at San Clemente and led the Tritons to a CIF and State title.

Unfortunately, neither QB made a claim to the job in spring and things will be open in camp with a third entry into the competition with true freshman J.T. Daniels. Not only is J.T. trying to win the job before his first semester of classes begins at USC, he is doing it after bypassing his senior year at Mater Dei in order to be here now. The one thing you should know is that he’s as prepared as could be for the opportunity after spending three years as the QB for the Monarchs, leading them to a national title and being named the Gatorade Player of the Year along the way. Even his private QB coach Jordan Palmer (who also works with Darnold) says that if J.T. wins the job he doesn’t think there will be a drop-off in play at the position for the Trojans. Think about that statement for a minute. So the expectations are there for J.T. but you know Fink and Sears have different plans and this is the time for them to show what they can do. It should be fascinating to watch how things develop.

What will be the identity of the offense?

This is a question that will be impacted by a lot of factors. Who will be calling the plays? In the past we saw a group effort that included offensive coordinator Tee Martin, head coach Clay Helton and QB coach Tyson Helton. Tyson is gone now but it remains to be seen what kind of influence will be felt from the head coach, or from new RB/run game coordinator Tim Drevno and/or QB coach Bryan Ellis. How does the offensive line come together? Every year in recent memory it seems as if there have been questions about the line, and some years the answers have been better than others. This year there is a lot of experience returning with a key move coming with Toa Lobendahn going back to center. Can the line establish the line of scrimmage in big-boy games like Texas and Notre Dame? If so, that would go a long way toward taking the pressure off a new QB, no matter who is under center. USC has the kind of RB talent this year that could allow for the offense to lean on the run game while the QB gets adjusted.

Who is ready for more?

Every year we see guys who have gotten their feet wet but are now ready to step into big-time roles. Think the two outside receivers in Tyler Vaughns and Michael Pittman, both of them had moments last season even while Deontay Burnett was leading the way with 86 catches. Deontay is gone now and that production could be split nicely with additional catches for Vaughns and Pittman. They definitely look ready based on what we’ve seen in spring and summer workouts. Then there is Aca’Cedric Ware who has waited patiently while his fellow Texan Ronald Jones put himself in the top 5 of the USC rushing list. Ware must still share a backfield with Stephen Carr, who was recently cleared to returned to practice, but until Carr is 100% it’s nice to have Ware back there and it’s important to note how good he looked in spring, I would have named him my spring MVP. Austin Jackson still needs to officially beat out Clayton Johnston at left tackle and the potential is there for him to be a good one. On defense, Brandon Pili is good to go. He got called into action over the second half of the season and earned honorable mention all-conference honors with his huge frame and impressive athleticism. If Pili, Marlon Tuipulotu and Jay Tufele are all available it would be a tremendous group to throw out there at nose tackle in terms of depth and talent. And then watch the safety spot next to Marvell Tell. Right now I think Bubba Bolden is the favorite to earn the starting spot but it could end up being a rotation with Ykili Ross, maybe Isaiah Pola-Mao or even true freshman Talanoa Hufanga. Any way you look at it there are some good options for someone to emerge.

The two biggest injuries to monitor right now are on the offensive side of the ball with Carr and tight end Daniel Imatorbhebhe. As mentioned earlier with Carr, he was recently cleared to return to practice following back surgery in February, but Helton said at media day that they would understandably be cautious in bringing him back. The Trojans have other good backs in Ware and Vavae Malepeai (along with promising freshman Markese Stepp) but Carr is different and it will be so nice to see him return to action. The Imatorbhebhe situation is frustrating because I don’t think we ever saw him at full strength last year, and his summer workload in PRP’s was limited to a single catch. Hopefully that changes quickly because he can be so valuable as a middle of the field resource for the quarterback, something we saw two years ago with Darnold. The biggest injury update on defense probably lies with Tuipulotu and his back, and it was good news to see him doing bag drills and sled work over the summer.

Which of the freshmen could earn an early role?

Well, as noted above, Daniels is certainly in that conversation but I would say the freshman most likely to make an instant impact is the guy catching so many of those passes from J.T. at Mater Dei and that’s Amon-Ra St. Brown. No freshman stood out more in the summer workouts as he showed up prepared and consistently made plays. It will be an interesting battle to replace Deontay in the slot because Velus Jones has bulked up and raised his game but I think Amon-Ra’s overall game is going to result in him being the starter sooner rather than later. I think we see at least two freshmen in the secondary with early roles in Hufanga and Olijah Griffin, and I think we see at least three linebackers with Palaie Gaoteote, Solomon Tuliaupupu and Kana’I Mauga with early contributions as well.