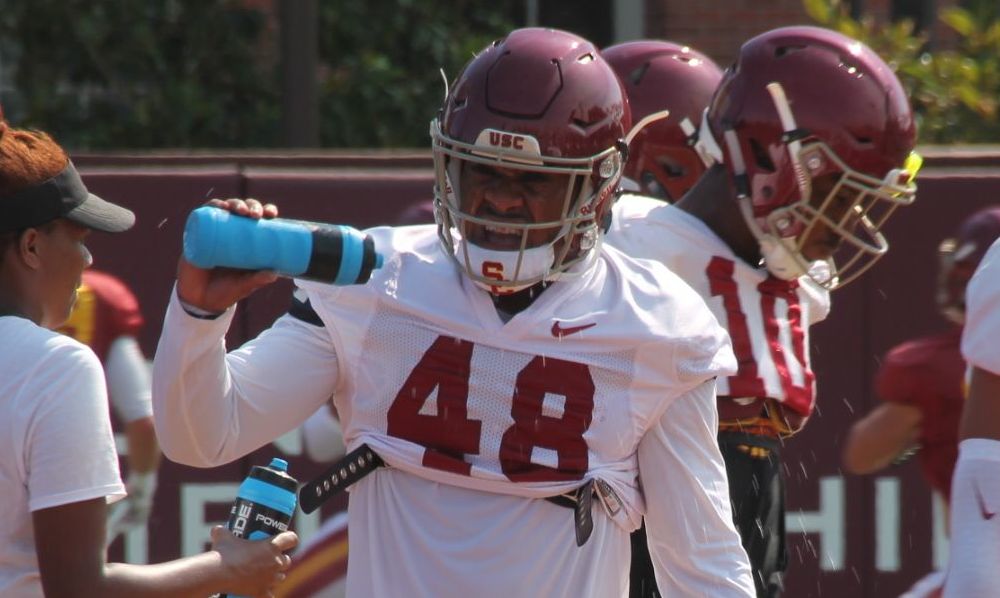 Here’s an update on the true freshmen (and one JC transfer) from the class of 2018 and how they have performed through the first week of USC fall camp.

QB J.T. Daniels – I don’t know how he could have had a better week. On his first play on the opening day against the first defense in an 11-on-11 drill he threw a 50-yard touchdown, then in his first scrimmage in the Coliseum he throws touchdowns on his first three drives, and four overall.

RB Markese Stepp – Very solid start for Markese. First of all, this guy is a legit “big back” who also brings quick feet and the ability to catch the ball. I like what I see so far.

WR Amon-Ra St. Brown – You have to put him right there with Daniels in terms of eye-opening starts to camp, and that’s probably because he’s been on the receiving end of many of Daniels’ passes, including three of them for touchdowns in the Coliseum scrimmage. He’s already been moved from slot receiver to the outside, and will see action from a variety of spots.

WR Devon Williams – The tall frame and athleticism are there and once he polishes up his game he will be a very tough cover. Still raw though as he’s never been a full-time receiver.

OL Justin Dedich – A fundamentally sound player and very aggressive, he has all the tools to be a good center. Working as the #3 center behind Toa and Neilon.

OL Liam Douglass – Is seeing time as a reserve at right tackle. He bulked up from his senior year of high school and will likely redshirt this year.

DL Trevor Trout – A physically stout guy who will fit right in line at the nose tackle spot with the ability to move around if needed.

DL Caleb Tremblay – Caleb has taken the experience of being here for spring ball and built upon that to be a much improved player this fall. He has very active hands and will be part of a good pass rush up front from the Trojans.

LB Kana’I Mauga – One of the more consistent performers from the class, Kana’I has been working as the #2 OLB for much of camp, and has also taken some ILB reps with injuries at those spots. Very quick feet.

LB Palaie Gaoteote – I thought Palaie was starting to make some plays once pads came on and he was working with the 2nd unit at WLB but he will miss time with a meniscus tear, similar injury to Porter Gustin.

LB Solomon Tuliaupupu – We haven’t seen Solomon as he continues to rehab from injuries suffered last fall at Mater Dei.

LB Raymond Scott – Good instincts and got time with the 1’s on Saturday with limited bodies.

LB Abdul-Malik McClain – Has the frame to fill out the vaunted USC #42 as a freshman. So far has been limited to a reserve role at OLB.

LB Eli’Jah Winston – Another OLB with a solid frame who is also behind a deep group of players.

CB Olaijah Griffin – Probably the most impressive of the defensive freshmen. Aggressive in coverage and from what we’ve seen so far he will be in the rotation at corner this year.

CB Isaac Taylor-Stuart – Has the physical tools, that’s for sure, but still adjusting to the next level. Once that happens he will be fine.

CB Chase Williams – Another tall corner, I would hope Chase could be redshirted as he’s never played the position full-time.

S Talanoa Hufanga – Had a very good spring but hasn’t made as much of an impact this fall. No doubt about his potential though, he’s going to be a good one.