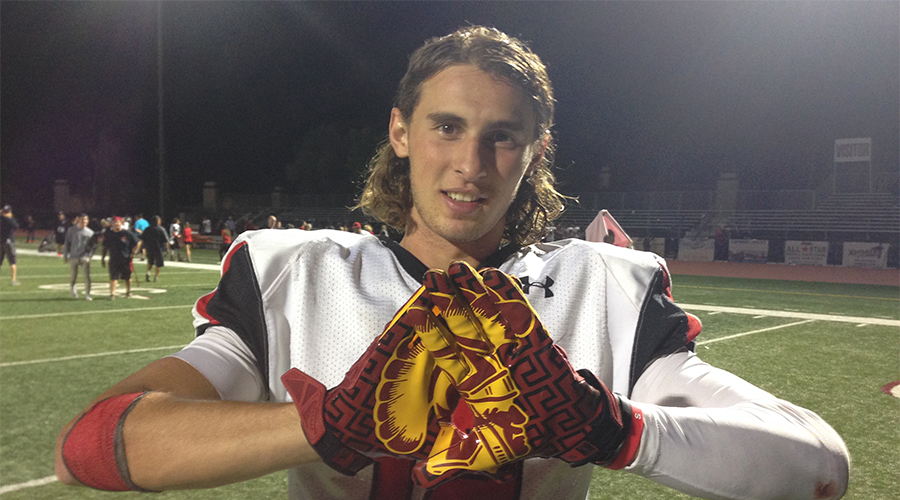 Matt Fink got a lot of playing time in the game, although he was on the wrong side of the ball in terms of being matched up against an impressive East team defensive line led by Rashan Gary (who was as good as advertised). The West offensive line struggled to prevent pressure and the receivers didn’t do too many favors with drops or letting balls get ripped away, and the lopsided score reflected that.

But as far as Fink was concerned, I thought it was a showing that highlighted his positives. He had a couple good runs, one a scramble that resulted in a nice gain up the middle and another when he made a dash to the sideline for a first down. He ran with a lot of confidence on those plays, no hesitation. And he matched up well size-wise, that’s another area where he should develop well. In terms of his arm, he showed what we have seen from him in his career so far, a good arm but not great and one that needs to work on his accuracy. He completed one 52-yard pass after rolling to his right but the ball was underthrown to the open receiver who would have scored with a better pass. He did complete several shorter passes as well, and in the end I think he has to walk away fairly pleased with how he handled himself in that setting against the defense he faced.

For USC fans who watched him, you can see that the key for Fink is going to be how he develops as a passer. He will be a very good athlete with the ability to run and he’s a pretty competitive guy, but to be the USC quarterback there is still a standard of throwing the ball that needs to be met and right now there is work to be done for Matt in that area. But that’s where coaching comes in, and he will certainly be surrounded by coaches who know the quarterback spot.

Fink did get picked twice. One was on a ball that was basically thrown up for grabs down the middle with the hope that his receiver could make a play but Lamar Jackson tracked the ball well from his safety spot and made the interception. Jackson sure looks the part of an imposing safety who also has good ball skills, hope the Trojans can land him. The other pick was basically the defensive back outworking the receiver for a ball that just as easily could have been a completion.