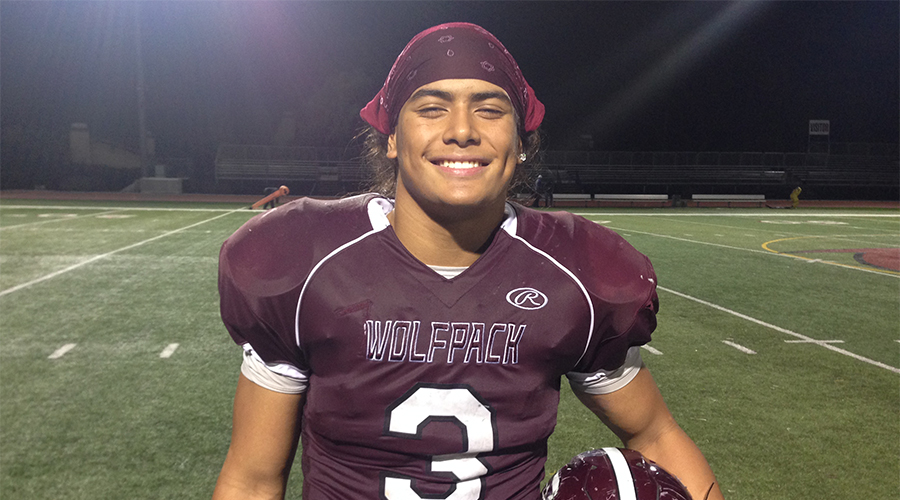 Heading into his junior campaign, Solomon Tuliaupupu was already regarded as one of the top linebacker prospects in his class, and with the way that he’s performed throughout this season, it’s safe to say that the Claremont (Calif.) star’s stock is only going to continue to rise.

Possessing 6-foot-3, 224-pound size to go along with outstanding athleticism, instincts, and an extremely physical brand of play, he put together the latest in a long line of standout outings this past Friday night. Despite being a bit under the weather during the contest, he still managed to rack up 10 tackles – two for a loss – and one fumble recovery from his middle linebacker spot in a 55-41 Wolfpack victory over Diamond Bar (Calif.).

“I love to come out and make big hits – that’s what I like to do,” said Tuliaupupu, who also hauled in one reception and made some key blocks at fullback. “I just come out and play hard. I want to be a good leader for my team.”

Not surprisingly, top college programs from across the nation continue to shower Tuliaupupu with attention. 21 schools have already come through with an offer for the Class of 2018 standout, with Ohio State serving as the most recent program to throw its hat in the ring.

As just a junior, however, Tuliaupupu’s primary focus is on his own current season on the field, and he’s still wide open when it comes to recruiting.

“It’s too early for me,” Tuliaupupu said. “I still haven’t discussed it at all with my family. It’s all a blessing, and I’m just thankful for every single offer, but I don’t really know what I’m looking for yet. I just want to find the best fit for me.”

But one school that figures to at least be in the discussion throughout the process is USC – for a variety of reasons.

“I grew up watching USC all the time, so it’s definitely a school I’ll consider,” said Tuliaupupu, who received an offer from the Trojans this past July. “They’re close to home, so my family would be able to come to a lot of my games. I also have a good relationship with the coaches over there, especially Coach [Johnny] Nansen. I like him. He’s a good dude and I respect him.”

In weekly contact with Nansen, Tuliaupupu actually got an opportunity to learn from the Trojans linebacker coach up close this past summer at the Rising Stars Camp.

“I loved working with him,” said Tuliaupupu, who saw time at both outside and inside linebacker at the camp. “He got on me, and I was raised like that. Hard work pays off. So, I love the way that he coaches.”

Tuliaupupu also has a cousin at USC in Viane Talamaivao, the Trojans’ current starting right guard. Both players work out together at times in the offseason at camps put on by Prime Time Polynesian, an organization that was started by a group that includes Talamaivao’s father, Chris, and his uncle, Pene.

“In the offseason he comes to PTP, and I train with him a lot,” Tuliaupupu said. “My dad is a coach for PTP too, and we come out every Saturday in the offseason and train hard.”

With USC playing in a rare Thursday night contest in the Coliseum last week, Tuliaupupu was able to take in the Trojans’ 45-24 victory over Cal, and he liked what he saw from Talamaivao and Co.

“I left a little early, but they were definitely executing well,” Tuliaupupu said. “I loved the way that they played. Of course, Adoree’ [Jackson] and JuJu [Smith-Schuster], they always show out. And Viane, he was blowing the holes open. I’m proud of him.”

Tuliaupupu will be at the Coliseum again this Saturday for the Trojans’ matchup with Oregon. He also checked out UCLA in person at the Rose Bowl earlier this season, and he camped with the Bruins this past summer as well.

Come late November, however, his attention will shift out-of-state for a period of time, as he hits the road for the first of a number of unofficial visits that he plans to take in the coming months.

Not surprisingly, Tuliaupupu does not foresee himself narrowing anything down in regard to his recruitment at any point in the near future.

“I definitely want to take my time,” Tuliaupupu said. “I’m not going to rule anyone out, and I don’t want to jump into anything too fast. I just want to find the school that fits me.”