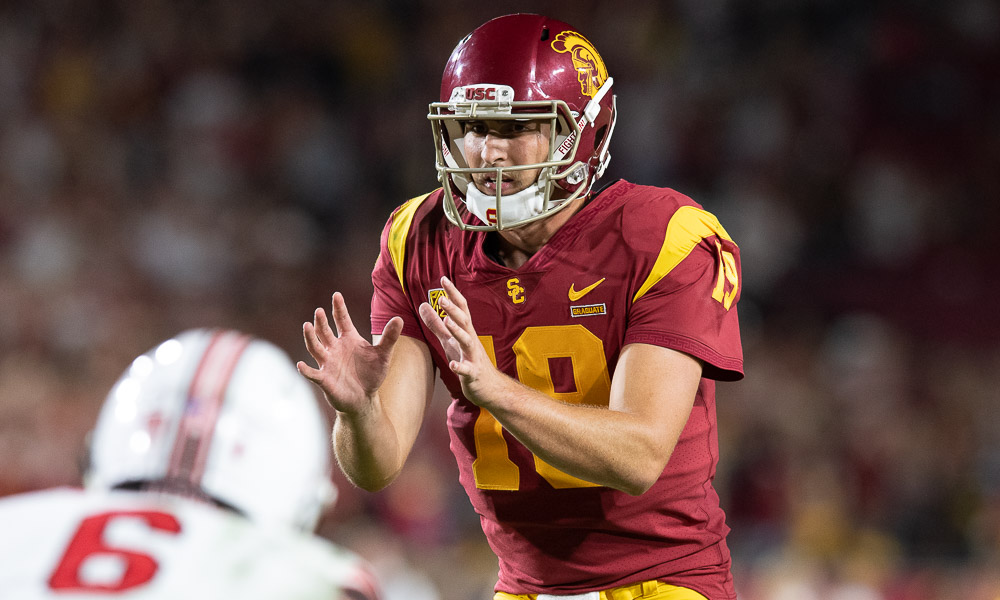 As the No. 21 USC Trojans prepare for their trip to take on the No. 17 Washington Huskies this weekend, they did so on Tuesday without key pieces on both sides of the ball.

Starting quarterback Kedon Slovis remains in concussion protocol following a big hit he took from Utah defensive tackle Leki Fotu on the second play of the Trojans’ 30-23 win over the Utes on Friday.

Head coach Clay Helton said he would have an update on Slovis’ status following Thursday’s practice, but that the freshman quarterback is not medically cleared to practice at this point.

Joining him in that distinction is safety Talanoa Hufanga, who also sat out Tuesday’s practice while in concussion protocol, and Helton also said he is dealing with an AC joint injury. As with Slovis, it will be worth monitoring whether Hufanga practices Wednesday or Thursday as an indication of whether he will be cleared to play against Washington. It’s never surprising when programs are overly cautious when it comes to concussions, and losing Hufanga from the lineup against the Huskies would be a big blow to the defense.

Elsewhere in the secondary, Tuesday brought good news on the injury front, as Isaac Taylor-Stuart returned to practice after missing the Utah game due to a concussion. Olaijah Griffin also got some work in, though he wasn’t dressed in pads, after he left the Utah game due to back spasms.

With Hufanga not working, Chase Williams moved to safety.

As for quarterback, Matt Fink will start in place of Slovis if he isn’t cleared before Saturday. Behind Fink, the Trojans are working on a package for walk-on quarterback-turned-safety-turned-quarterback Brandon Perdue. Helton and offensive coordinator Graham Harrell said Tyler Vaughns also received some reps at quarterback today, as they look for any potential help at that spot behind Fink.

While keeping Fink healthy will be a priority for the Trojans if Slovis is unavailable, Harrell doesn’t see it changing what USC will do offensively.

“You gotta let the guy go play,” Harrell said. “You can’t play scared of seeing someone hurt. You obviously don’t want to put unnecessary hits on him, but you also can’t handcuff the kid. He’s gotta to go play his game.”

Fink is more mobile than Slovis and can take advantage of openings with his legs. But after watching two quarterbacks go down over the first four games of the season, the Trojans have to balance the benefit of using Fink’s running ability against the downside of not having a viable option behind him.

“To give yourself the best chance to be successful, you gotta go be yourself,” Harrell said. “It’s not like we’ll say, ‘Hey, if you feel like scrambling, don’t scramble. That’s just not who he is. He’s got to go play and do everything he can to be successful, and we need him to stay healthy. So, that’s the situation it is.”

While there still might be a chance that Slovis returns for the game, the gameplan after Tuesday’s practice seemed to revolve around Fink.

“We’ll plan on playing Fink, and if something happens, now you’re in a scramble situation and you gotta make the best of what you got,” Harrell said.

Defensive end Christian Rector sat out practice today. He missed the BYU game with an ankle injury but was able to return for the game against Utah. Helton said Rector told him today that he felt better today than he did last week.

Cornerback Jayden Williams has changed his jersey to No. 14.

Artificial crowd noise was pumped in throughout practice today.