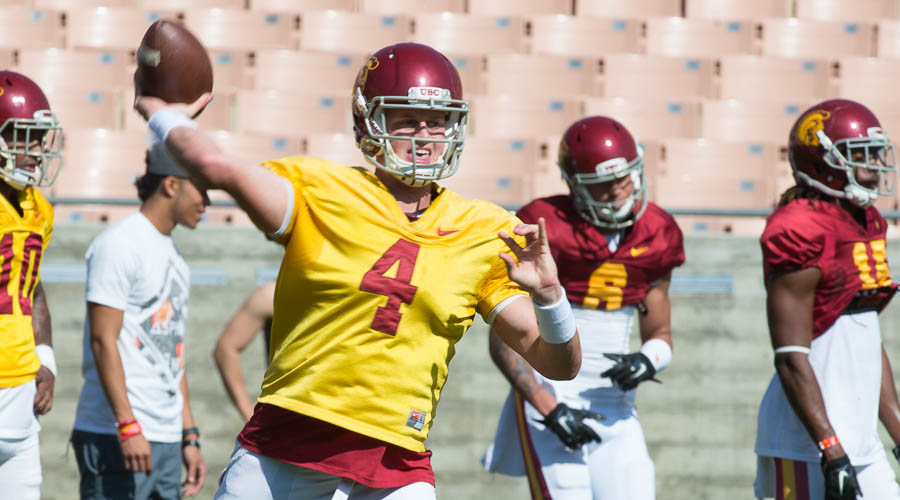 The Trojans officially have a quarterback as Clay Helton announced today that Max Browne will be the starter in two weeks against Alabama.

“At this point, we feel that it is in the best interest of our football team to lean on the veteran experience that Max Browne has, so we have named him the starter going into our opening game against Alabama,” Helton said in a statement released by the university. “With our experienced offensive line and the weapons at our skill positions, we as a staff are confident that Max’s ability will help guide a very successful offense.”

The decision is not a huge surprise as Browne has been the presumptive favorite for the job since spring ball when Helton said he had an “edge” in the competition, and as good as Sam Darnold looked throughout the whole process, he never completely closed the gap or bypassed Browne.

In Browne the Trojans are getting a 6-5, 220 quarterback who is ready for this moment, a guy with maturity, command of the offense and a lot of skills for the position. Max is entering his fourth year at USC (11-19 for 143 yards in limited game action) and he has the respect of his teammates who know what he brings to the table.

“I was thrilled when Coach Helton gave me the news,” said Browne. “It was a moment of realization that hard work and staying the course paid off for me. I feel like I have put in the work necessary to earn the starting position and I look forward to leading this team to championships. Sam is a heck of a player and he pushed me to the final day of camp. We are good friends and I have no doubt he will have a great career at USC.”

Make no mistake, Darnold (6-4, 225) has opened a lot of eyes with his natural abilities, including as a runner with the ball in his hands, and Helton said he envisions using Darnold in special situations during the year. The fact that the competition went on as long as it did is a testament to Darnold making it a real battle, when it would have been easy to hand the job to the veteran while having the redshirt freshman wait his turn.

“I was disappointed in the outcome but confident in Coach Helton’s decision,” Darnold said. “Coach spent lots of time watching the film and making his evaluation. I am proud of the performance I gave during practices and I felt that I made huge strides in terms of leadership. I will continue to work hard and prepare as if I’m the starter, so I will be ready when my name is called. I’m proud of Max for what he has done and how he competed. The competition made us both better. I have no desire to leave USC, this is the place for me.”

There were a lot of questions at the end of spring when Helton decided to wait on naming a starter but it turned out to be the right decision for a coach who preaches competition. In fact, the entire process reflects well on Helton for his decision-making and honest communication with the players. These situations can often be tricky to navigate but Helton was up front about how he was approaching what was the biggest personnel decision of his tenure so far as head coach.

“We were very happy as a coaching staff with the decision to continue the quarterback competition into our fall training camp,” said Helton. “We believe that the competitive atmosphere that was put in place allowed both quarterbacks to progress as players. We also gained valuable knowledge on each quarterback’s skill sets that will allow us to better game plan this fall.”

Helton was also quick to praise Browne and Darnold for the way they handled things. It’s easy to forget sometimes that these players sit in the same meeting rooms, are usually friends (as Max and Sam are) yet they are competing for a high-stakes position that can dramatically impact their futures.

“I personally appreciate how both men handled this competition with great maturity and camaraderie. After sharing the news with them today, both showed tremendous class and integrity. It is a great reflection of both men’s character. We are very fortunate to have them on our football team. I look forward to watching both have highly successful football careers here at USC.”