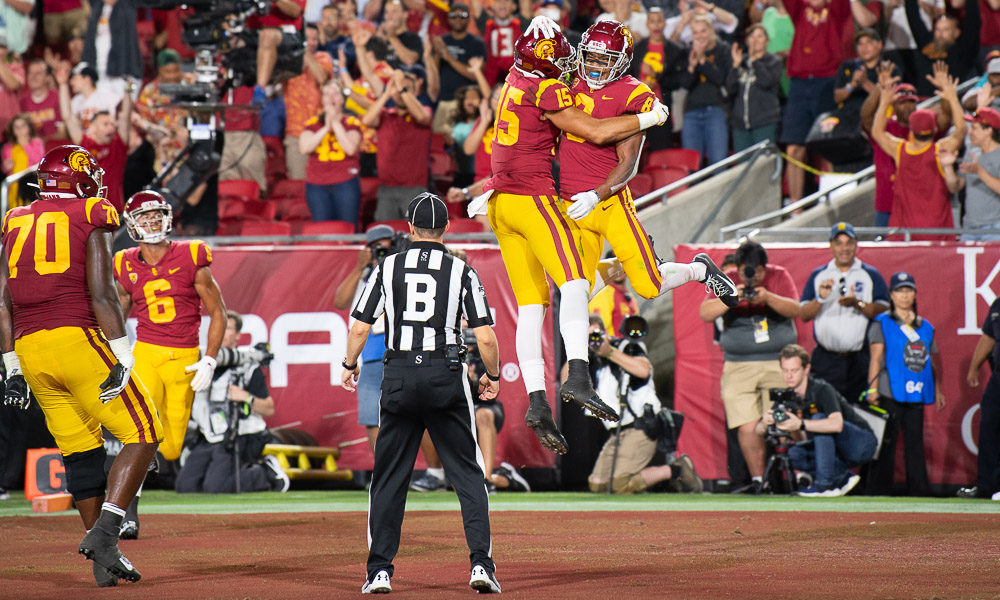 Alabama, Auburn, Florida, Georgia, LSU, Maryland, Texas and USC are the finalists for the 6-foot-1, 185-pound Maryland speedster. Johnson is the nation’s No. 199 overall prospect and No. 38 wide receiver.

Looking at the options left for Johnson, it’s clearly a battle among recruiting heavyweights, with Maryland also doing extremely well with in-state prospects and in the DMV region in this class.

USC has done well to make a quick impression on Johnson, as the Trojans only offered at the very end of April and are firmly in the mix. While missing out on Franklin–the top-ranked wide receiver in the state and the nation’s No. 31 overall prospect–isn’t ideal, the Trojans are equipped to pivot at the position.

Johnson brings true speed to the field and he’s comfortable catching quick screens at the line of scrimmage or getting past defenders down the field. As a junior, Johnson caught 47 passes for 832 yards and seven touchdowns, and added two more scores on the ground, another on a punt return and another on a kickoff return.

USC already holds a verbal commitment from wide receiver Quay Davis (Dallas/Skyline) and looks to be the favorite for dynamic three-star prospect Michael Jackson III (Las Vegas/Desert Pines). Wide receivers coach Keary Colbert will likely push hard for Johnson, but he should be able to get some help from defensive line coach Vic So’oto, who is very familiar and comfortable with that area from his time at Virginia. So’oto has already reeled in a commitment from defensive end Colin Mobley (Hyattsville, Md./DeMatha Catholic), whose high school sits less than 20 miles from Johnson’s school.

It would not be surprising to see Johnson visit USC at some point this summer or fall, whenever the restrictions on on-campus visits are lifted.

USC will have plenty of talent at the wide receiver position following the 2020 season, but the Trojans will lose Tyler Vaughns and Amon-Ra St. Brown is a potential early entrant into the NFL Draft. The Trojans signed two receivers in the 2020 class, in Gary Bryant Jr. and Joshua Jackson Jr., but with the potential three-and-out talent that exists among the group of 2019 receivers–Drake London, Kyle Ford, Bru McCoy, Munir McClain, John Jackson III–USC could take as many as three wide receivers in this 2021 class.