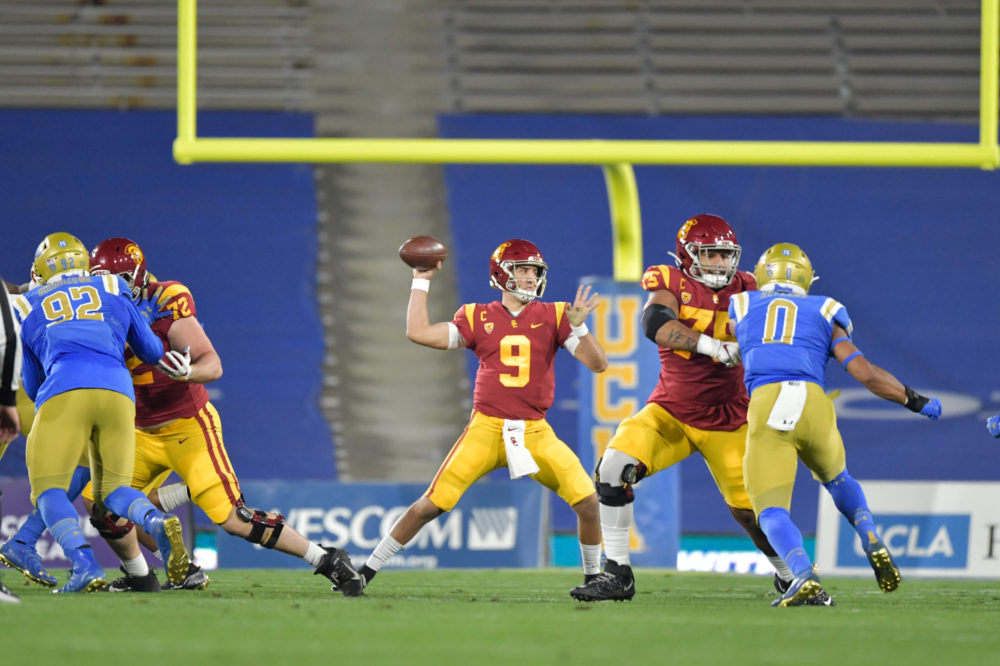 The win caps an undefeated regular season for USC, which earned three of its five wins by scoring touchdowns in the final minutes (or seconds) of the game.

For 30 minutes, it looked like USC would be content to take advantage of Utah’s win earlier in the day that guaranteed the Trojans a spot in the Pac-12 Championship Game. For the next 30 minutes, USC set about earning it.

“I wanted to start off by thanking a bunch of great kids for being the definition of fight on,” USC head coach Clay Helton said. “The entire second half, I never saw one kid quit the fight, and just down the stretch just make play after play after play. Great college football game.”

The two teams went into halftime with UCLA leading 21-10 and it took only a matter of moments in the third quarter for the Bruins to push that lead to 28-10.

USC was playing truly uninspired football, missing tackles consistently on defense and unable to establish any kind of rhythm on offense. Talanoa Hufanga said USC had a rough first half, but it was about making adjustments defensively to give the offense a chance to win the game.

“We just had to come in and make adjustments,” Hufanga said. “Our coaches preach, ‘No excuses, just adjustments, come out here and make plays.’ We had a rough first half and we have to give credit to a great UCLA offense that comes out here and does a lot of different things. We kind of call it an exotic thing because they line up with all of these different formations. I give a lot of credit to them because they had a great first half, but we had to come out in the second half to make adjustments and make these key simple fixes so that it could help us win this game, and ultimately just give our offense a chance.”

To that point, the only thing USC had going for it was a 65-yard touchdown reception by Drake London, who broke several UCLA tackles beginning at the 25-yard line on his way into the endzone.

It looked as though USC would limp across the 2020 season finish line facing an 18-point deficit in the third quarter. Over the past two games, USC had scored just 12 second-half points combined. In this one, the Trojans exploded for 33 — including outscoring UCLA 20-3 in the fourth quarter.

USC scored touchdowns on five of its seven second-half possessions, with Slovis throwing four of his five touchdowns over the final 30 minutes. The Trojans cut the lead to 28-17 on a 38-yard touchdown pass from Slovis to Tyler Vaughns, then got within five points on a short touchdown throw from Slovis to St. Brown.

But USC went for two after that score, with four minutes remaining in the third quarter, and came up short.

The game looked finished for USC late in the third quarter, as the Trojans were driving and a would-be first-down conversion slid through the hands of St. Brown and was intercepted by UCLA. The Bruins took advantage with a 69-yard touchdown pass on the ensuing play, giving UCLA a 35-23 lead heading into the fourth quarter.

Every fourth quarter play seemed to come with plenty of pressure, but several USC players stepped up in a big way.

Running back Vavae Malepeai scored on a 10-yard run to make the score 35-30. Malepeai recorded the first 100-yard rushing game for USC this season, as he finished 110 yards on 19 carries. USC only rushed for 100 yards in the game, but Malepeai’s performance was sorely needed to keep the Bruins at least a little bit honest. That touchdown from Malepeai capped an 11-play, 75-yard drive for the Trojans.

Safety Talanoa Hufanga then made another signature play in his USC career, reading a quick out throw from UCLA quarterback Dorian Thompson-Robinson and stepping in front of it for an interception. His subsequent touchdown return was nullified by a penalty, but USC was able to convert a third-and-one situation on that drive and punch the ball in with a 9-yard touchdown throw from Slovis to London to take a 36-35 lead with 8:09 remaining.

A missed two-point conversion on that drive left USC with only a one-point lead (kicking extra points rather than going for two in both situations would have left USC up by three). UCLA took advantage of that, driving for what looked like a game-winning 42-yard field goal with just 52 seconds remaining.

At that point, it was true freshman wide receiver Gary Bryant Jr.’s opportunity to make the first massive play of his USC career and etch his name in this USC – UCLA rivalry. His 56-yard kickoff return set USC up with a much shorter field in its search for a game-winning score.

The Trojans struck first with a 38-yard pass from Slovis to Tyler Vaughns, as Vaughns went up over a defensive back to come down with a very difficult catch. Slovis found St. Brown on the next play, with just 16 seconds remaining.

Slovis said it wasn’t the call that came in from the sideline, as Slovis said Helton told him before the drive that if he saw man, he had a green light to throw it out there.

“And then on the goal line, we saw man again,” Slovis said, adding that it was also man coverage that allowed him to make a check at the line and toss the previous throw deep to Vaughns. “We had a wrong call but I chucked it over to (St. Brown). It probably gave coach Helton a bit of a tough time. Sorry about that coach, but it worked out for us.”

Slovis threw for 344 yards and five touchdowns against two interceptions. Vaughns finished with eight receptions for 128 yards and a touchdown. London had five catches for 97 yards and two scores. St. Brown had two touchdowns and 73 yards on 10 catches.