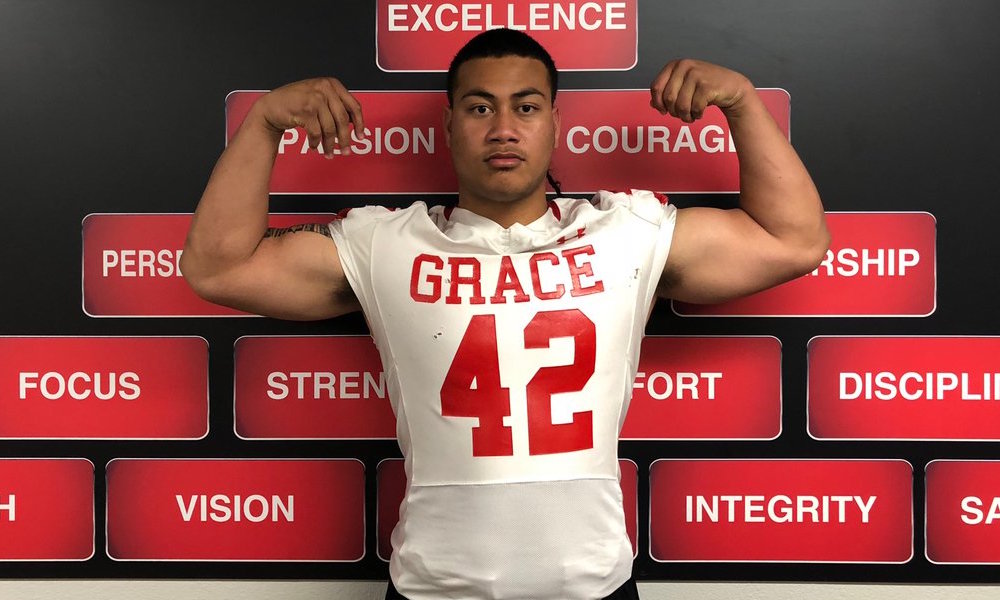 Garry Paskwietz: Erik – we talked offensive recruits last week for the class of 2019 so let’s do an overview of where things stand for the defensive side of ball now. When you look at the defensive line, it’s probably as much of a priority as the offensive line, and we’re seeing the picture clear up a little in terms of the top names on the list. There were even a few on official visits last week with Siaki Ika, Joshua Pokula and Laiatu Latu, all of whom could end up as legit options. How are you viewing things right now on the line and any other names that you like?

Erik McKinney: Like you said, the line is definitely the most important spot on the defensive side of the ball in this class. Those three names you mentioned would be a tremendous starting point for this group—especially Ika, since it might already be time to start thinking about getting to replace Brandon Pili, who looks like an early entree candidate down the line. Of course, the name at the top of the list is Kayvon Thibodeaux, who will look long and hard at several SEC options, but should remain a priority for USC. The good news is that several other local defensive ends are still in play as well, including Stephon Wright and Drake Jackson. USC has also received interest from Purdue commit George Karlaftis, who would be considered a long shot to flip because of the distance, but its another name in consideration.

GP: I would still love to see the Trojans get back into things with Faatui Tuitele, who seemed headed for USC at the start of the process but now isn’t listing the Trojans. You just don’t find many big guys like that in the middle of the line. OK, let’s go back to linebacker where, after taking 6 in the last class and already having a commit from Stanley Taufoou (photo above), it’s hard to imagine USC taking too many but there are some good ones still out there with guys like Maninoa Tufono and Henry To’oto’o at the top of the wish list. How do you see things playing out here?

EM: I don’t think you need more than two or three linebackers in this class and USC obviously saw something they liked in Taufoou. I would love it if USC could get back into it with Mase Funa, who committed to Oregon. I would settle in with those four names (Tufono and To’oto’o included) and see how things shake out with that group unless somebody puts together a really dynamic senior season. And that’s especially because you also have a couple of rangy athletes in Tristan Sinclair and Asa Turner potentially capable of playing safety or linebacker. So while the linebacker number can be fluid, it’s definitely the spot I’m least worried about taking bodies in this class.

GP: Agree on Funa. I thought he made a real nice complement to Solomon Tuliaupupu last year at Mater Dei and I was looking forward to seeing that again. OK, let’s move back to corner. The Trojans have one commit at DB in Trey Davis who will likely be a corner but could also end up at safety. There is a pending announcement from Chris Steele, also listed at corner but could project as a safety, and Chris is as important as any recruit in the secondary right now as far as I’m concerned. One name that I don’t think is getting as much attention as he should is Trent McDuffie, who brings a lot of speed to the position. What do you think of Max Williams? A good, consistent player from a good school and he’s had an SC offer for a long time. At safety, the one other name I would want to bring up is Cameron Williams, the former Oregon commit who bring a physical presence to the position.

EM: I completely agree with you about Chris Steele. He is set to announce on July 7 and if he does pick USC as expected, it will be a massive shot in the arm to this class. He’s incredibly talented but he’s also a guy that other recruits know and respect. He’ll help a program build their 2019 class. With Max Williams, I just wish he was taller. I understand that cornerbacks don’t need to be 6-2 to be successful, but USC defensive coaches have shown that they will lean toward cornerbacks with size, and Williams might just be too short for USC to really push for him. That being said, I think he’s very talented and if there winds up being a spot to fill, I absolutely would be for taking him. Cameron Williams is definitely a guy you want in this class and the momentum seems to be there after he decommitted from Oregon and then spent significant time at USC. Cornerback Erick Young deserves a mention here after he took an official visit to USC this past weekend, though he will be tough to pull out of Texas. And a couple of defensive backs that have to stay in the conversation even though they’ve tried to take themselves out of it are Mykael Wright, who committed to Oregon, and Isaiah Rutherford, who did not list USC among his top seven schools.