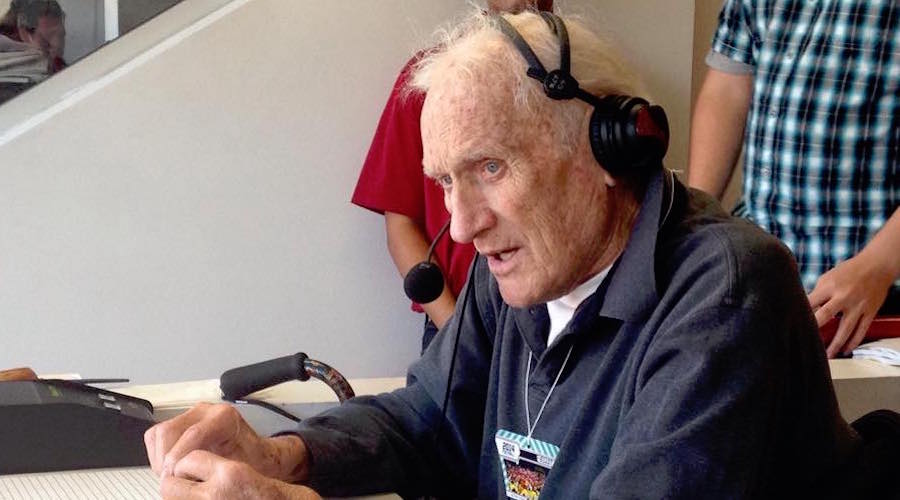 Having grown up in a radio family, you may not be surprised to know that I tended to listen to the radio a lot.  At first, as a very young child it was just to try and figure out how my father got in that small box and was talking directly to me!

Later, with that magic gone but my love for the box intact, I listened to the radio for entertainment.  Since I have a sister some 7 years older than I, it was usually music on her radio while she had to keep an eye on me while she was out with her friends.

Add to this mix the fact that my dad was a crazy big sports fanatic, and we listened to all manner of games on the radio at home and in the car.  The fact that I can only recall those long ago memories as the white noise of life matters little now:  it led me to listen to the next game and the next and the next on my own.

The first cognizant memory I have of understanding the game I was listening to was a Laker’s playoff game coming live from Detroit in 1962 called by Chick Hearn.

Later that year, I attended my first USC football game, a win over Duke at the Coliseum.  I also saw the Navy game, and went to the Rose Bowl vs. Wisconsin.

But it was just before that bowl game I came to know Tom Kelly for the first time.

Now, he didn’t know me, even though I thought he might be talking directly to me at times.  It happened on the radio.

My grandfather took a friend and me to the old L.A. Classic college basketball tournament, hosted by both USC and UCLA at the Sports Arena. (Man, do I wish we still had that great event every year!)  We watched four games in one day and never got tired of it.  The next day we could only stay for two games, but grandpa said we could listen to the SC game on the radio when we got home.

The team featured All-American John Rudometkin and was a year away from winning the last outright conference title the Trojans have won in roundball to date.

And so I tuned in to the pre-game show, the game and the post-game show. And there was this guy who made the players jump right out of the radio, and it was the most exciting thing I had ever heard.  I was instantly smitten.

And that guy was Tom Kelly.

His passing is as sad a moment in my life as any.  I grew up with Tom.  I cheered and groaned and wept and exulted with him.  I was inspired by him and later came to know him.  And I am very, very sad.

Spending fall afternoons and winter evenings with Tom, either in person with an earpiece in place, at home or in the car, he was a relative constant for all of us who bleed Cardinal and Gold.

There was nothing quite like getting up on a Saturday morning, getting everything in place just so, then tuning in that tinny and scratchy sound coming live from South Bend, Indiana.  He told us what it felt like to be there, what it looked like and smelled like, and most importantly, how we were going to do that afternoon and why.

Then he let it all loose into a stream of consciousness delivery onto which we hung until the last breath and the final gun.

If the game was mundane, he told stories. If it were tense and gritty, something would happen to the timbre of his voice.  Big plays were enhanced with a guttural growl.  Triumphs with an unbridled glee.  And we could never get enough.

And that voice! Unmistakable and truly–like Hearn, Scully, Enberg and Miller alongside him as contemporaries–one that was identifiable with his team as any in town.

A booming, rich and full-throated effort you could hear from a full city block away. Oh, how we loved that voice!

He was a close, personal friend of the great McKay, and they shared more than a few “see-throughs” at their favorite watering hole, Julie’s, after practices and perhaps at other times.

He seemed to know everyone.  Not only quick with a joke and a smile, but as cantankerous and curmudgeonly as they come, which only meant to me that he never played games—he always spoke his mind, come what may.

He was a marvel in a crowd, always seeming to be the center of attention while holding court, whether in recent years at an easy-to-spot pre-game party curbside at the Coliseum, or during his announcing days with reporters and others at a restaurant or bar in some far-flung city in which the Trojans were playing the next day.

And something I found MOST important in my career:  while you knew which team he represented, he never gave anything but a clear and concise view of the game, including praise for opposing players and teams when the moment called for it.

His calls of the 1964 season, including the great upset of then #1 ranked Notre Dame (for whom he had particular disdain) are preserved on a record album, as are the calls of the incredible comeback against the Irish ten years later.

The grooves in both of mine are so worn, I had to purchase new ones on Ebay.

For a while, another Hall of Famer, Mike Walden took over the radio duties, and so T.K. switched over the TV, calling the SC games on a tape-delayed basis to be played back on Channel 11 beginning at 11 p.m. on game night.

More often than not, on road games, the guy who later became my stats guy and who is my long-time best friend Mark Hoppe and I would sequester ourselves away from all forms of media, and spend the day playing ball in his backyard, trading baseball cards and playing sports board games to stay busy until “game time”.  Then we’d treat the broadcast as if it were live.  Sometimes we’d listen but sometimes we’d turn down the sound and pretend we were the announcers.

And so it began.

Not a one trick Trojan Horse by any means, he was the sports director at KTTV, did countless other events on the air, and could still be heard not long ago calling various golf events on local cable outlets.

Admittedly, I always had his job in my sights from the time I first picked up a microphone and tried it out in 1965 for the first time.  After leaving USC and hitting the small town radio circuit for no longer than I had to, in 1984 I landed a job as weekend sports anchor update at KNX, the USC flagship station.  After a not-too-long wait, I was asked to fill-in one afternoon doing updates for Kelly on a Friday as he had to hit the road with the Trojans.

It happened several times that year.  Then one time, to the surprise of all, he came into the newsroom, announcing his presence from well down the hall, if not in the parking lot.  Never glancing at me for a moment, he strode into the News Director’s office before they re-emerged together. The N.D. brought Kelly over to me and introduced us…..the first time I had ever met the man.

“I hear you are quite the Trojan.  And also that you’re doing a fine job here filling in for me, so thank you on both counts.”

I can’t imagine my reply.

In 1988, I was asked by KNX management to become the first-ever sideline announcer for USC game broadcasts, doing the Notre Dame game.  When the game ended, Tom’s color man Fred Gallagher had to go down into the locker room for the post-mortems, and Tom asked if I would come upstairs and finish up the post-game show with him in the booth.  Gulp!

And so I finished the 1988 USC football season sitting next to my hero and the legend, and acting like some sort of equal.  Little did I know that the next time I would be in the booth (the second time ever there in the Coliseum home radio booth) I would be the new play-by-play man.

In 1989, I got wind that he was going to be leaving USC radio and moving over to Prime Ticket as it opened business for the first time.  I put on a full-court press, and with his help, was able to win the job those 27 years ago.

In the interim, he and I became friends, and I spoke to him at games in and out of the press box for many years.  He smiled more easily and became softer as the years went on, no question about it.

He had been in failing health for a couple of years.  He was placed in a nursing home in the San Fernando Valley, and we spent a few afternoons chatting about sports, the Trojans, the radio business and more.  He rallied and was allowed to return home.  Not long after he went right back in.

Late in the 2014 season, he made it back to the Coliseum one last time to see his Trojans annihilate the Golden Domers.  During the blowout, we asked him to come to the booth and join us, and we spent ten minutes talking about his career, the great games and moments and players, interspersed with a little play-by-play of three-yard runs that at that point seemed so insignificant.  It could have gone on for hours.

As word of his presence in the booth spread, people flocked in to witness.  By the end there wasn’t a spare inch to be had in there, and it was stone quiet as everyone hung on his every word—-just to hear him one more time.

Last time I saw him was at a Southern California Sportscasters luncheon at Lakeside Country Club just before Father’s day last year.   Impeccably dressed as always he seemed like the fun, irascible, and bombastic man we’ve all come to know and love.

People used to come up to me and call me “Mr. Arbogast”, and I would deflect that honor to my father, until he passed away.  They also like to call me “The Voice of the Trojans”.

To me, there will always be only one of those.