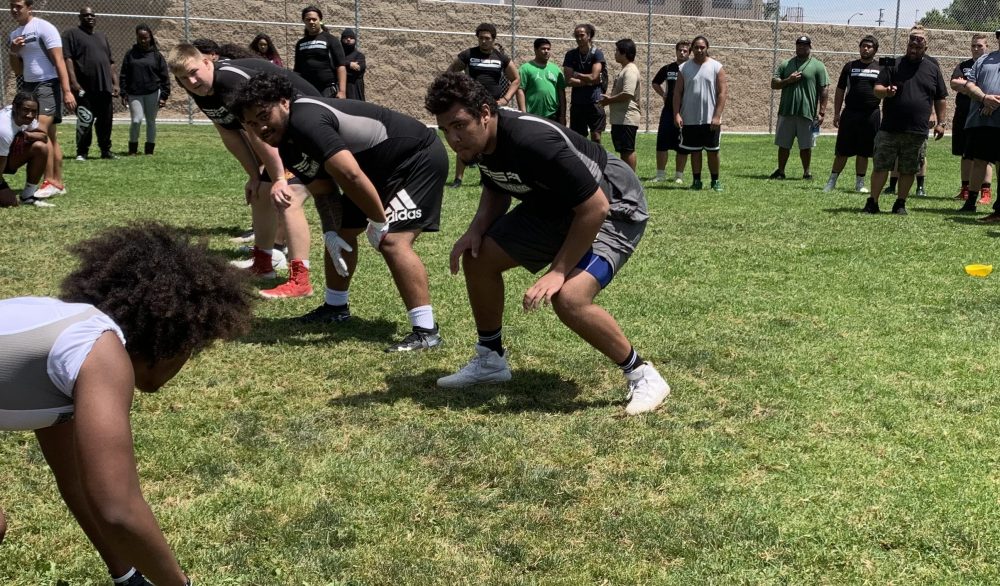 Several USC targets, including USC offensive tackle commitment Mason Murphy (San Juan Capistrano, Calif./JSerra) took part Saturday morning in “The Experience,” a chance for offensive and defensive linemen to get coaching and work against each other in one-on-ones in a camp setting.

The headliner as far as USC was concerned was offensive tackle Mason Murphy, who committed to the Trojans in March. The 6-foot-5, 290-pound tackle has noticeably changed his physique over the past year, as he looks much leaner and stronger heading into his senior season. On Saturday, he was the best offensive tackle in attendance and took quality reps against the best defensive ends there.

Murphy looked quick and athletic enough, with a strong punch. USC offensive line coach Tim Drevno definitely has something to work with in Murphy, who likely won’t be called upon to play immediately for the Trojans, but could develop nicely during his career.

There were two 2022 defensive linemen with USC offers, and Nate Burrell (Bellflower, Calif./St. John Bosco) jumped out immediately. He took reps at defensive tackle and defensive end. He might be a bit of a ‘tweener right now in terms of those two positions as his size his concerned, but he flashed big time off the edge as a defensive end. It’s easy to see why so many programs have offered early on, and this is a prospect who will be fun to watch progress over the next two years.

Defensive tackle Damonic Williams (Mission Hills, Calif./Alemany) is another prospect at Alemany with a USC offer and he impressed Saturday as well, though just a notch below Burrell. I liked Williams’ get-off from the line and the fact that he might have taken as many reps as any player at the event. He’ll need to develop a more dynamic pass rushing arsenal to really excel in this kind of setting, but he’s certainly a prospect to monitor this fall. Talented defensive tackles can be tough to come by in Southern California, as Williams is one of a few with early offers from the Trojans.

There were a couple of interesting defensive ends in Mathias Malaki-Donaldson (Westlake Village, Calif./Oaks Christian) and Rashad McKenzie (Mission Hills, Calif./Alemany). The 6-foot-5, 220-pound McKenzie is listed as a tight end, but he showed plenty as a defensive end on Saturday. He already holds offers from Arizona State, Oregon and Washington. He flashed a few times with his quickness around the edge and the ability to use his hands to keep the tackle off of him.

Malaki-Donaldson has already been offered by Colorado, Florida State, LSU and others. At 6-foot-5, 210 pounds, it’ll be interesting to see how he fills out over the next two years as to whether he keeps his hand in the ground or can drop into more of a 3-4 linebacker. The talent is clearly there though, and he possesses plenty of athleticism in his movements.

One of the better players overall at the event was center JT Hand (Mission Viejo, Calif./Mission Viejo). He went into the event with an offer from UNLV, but picked up his first Pac-12 offer on Sunday, as Arizona extended an offer. Hand’s father played for the Wildcast. It’s likely the first Pac-12 offer wouldn’t have taken this long had the 2021 lineman been able to attend camps this spring and summer. He has a strong base, good hands and he’s a great competitor. While he doesn’t immediately jump out physically, if Saturday’s showing is a measure of how he performs consistently, he’s absolutely a Pac-12 talent.