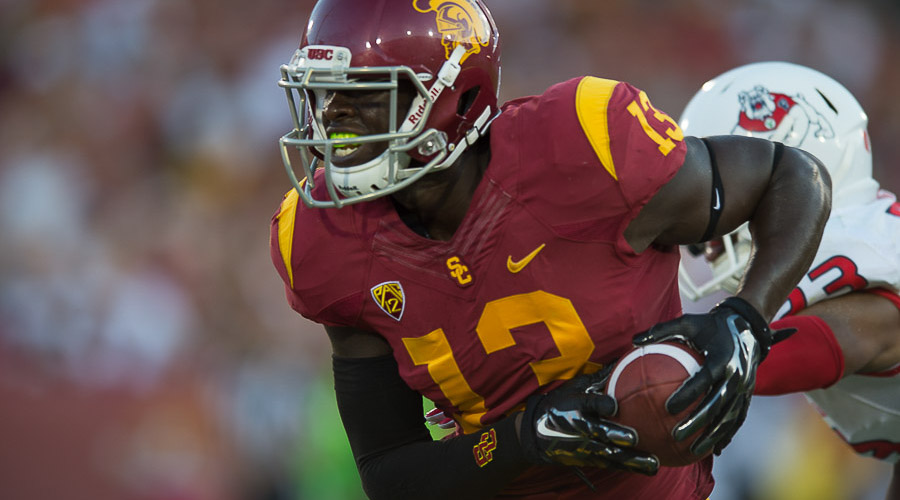 On August 12, 2015, Judge Robert H. O’Brien of the Los Angeles Superior Court issued an order staying USC’s May 12, 2015 decision to expel former Trojan tight end Bryce Dixon as a result of investigations into allegations by a USC trainer that if true, would amount to rape. What are the court filings saying, and what’s next?

Bryce Dixon, through his attorneys Werksman Jackson Hathaway & Quinn LLP filed a Petition for Writ of Administrative Mandate dated August 12, 2015 (“Petition”). The Petition papers were roughly 24 pages, exhibits made up over 90 pages, which largely consist of Title IX rules and policy documents. Dixon requested that the hearing on the matter be conducted on an “ex parte” or rush basis.

The incident that USC focused on in its determination of expulsion stems from October 23, 2014. The named respondents to Dixon’s Petition, USC’s Title IX Investigator Kegan Allee and Vice Provost for Student Affairs, Ainsley Carry, claim in their Opposition that Dixon “was expelled when the University found that he had forcible, non-consensual intercourse with Jane Roe, a fellow student, on the night of October 23, 2014.” (USC’s Allee and Carr’s Opposition to Dixon’s Petition and Ex Parte Requests, August 12, 2015, Page 1.)

According to the documents filed by Dixon, Dixon and Jane Roe, who documents say is trainer, allegedly had a prior encounter of a sexual nature on October 9, 2014 — an encounter which USC determined Dixon was clear of misconduct, “on the grounds that there was no evidence to suggest that the female trainer demonstrated a lack of capacity.” (Petition, Page 14.)

Dixon alleges that sexual activity between him and the trainer did occur on October 23, 2014, and even goes into detail about what occurred, but states that it was consensual. (Petition, Pages 14-16.)

Dixon alleges his roommate told Allee that “he was in the living room and could hear the female trainer moaning, and that it sounded like normal consensual sex related moaning.” (Petition, Pages 14-16.)

Dixon alleges Allee never interviewed the female trainer’s boyfriend of six months at the time, who Dixon surmises to have believed the encounter to be consensual. (Petition, Pages 16-17.)

Dixon alleges that USC’s private Title IX sexual misconduct investigation process is “utterly lacking in due process, with no hearing, no right to counsel, no rules of evidence, no presumption of innocence, no right to possess copies of witness statements and evidence, and no right to confront witnesses against him.” (Petition, Page 1.)

Dixon claims “USC conducts no evidentiary hearing at all, relying instead upon the Title IX Investigator [named Respondent Dr. Kegan Allee] to reach her conclusions without a hearing, based upon her own review of the interviews and evidence she gathered as part of her own investigations.” (Petition, Page 10.)

Dixon claims that, “relevant evidence is available which was improperly excluded or unavailable during USC’s Title IX disciplinary process. [Dixon] will seek leave to offer such evidence before the reviewing court at the hearing on this Petition.” (Petition, Page 22.)

Dixon alleges that the “entire investigation” of the misconduct complaint brought on “by a 22 year-old fifth-year USC female athletic trainer” was conducted by Allee, who Dixon claims acted as “police, prosecutor, and judge.” Dixon appealed the initial findings and sanctions via USC’s appeals policy, but ultimately the “findings and expulsion sanction” were adopted by USC Vice Provost for Student Affairs, and the other named Respondent, Ainsley Carry. (Petition, Pages 1-2.)

Claiming to have exhausted the appeals process through USC, Dixon turned to the Los Angeles Superior Court for review.

Opposition of USC’s Allee and Carry

The two named Respondents, Kegan Allee, Title IX Investigator at USC, and Ainsley Carry, Vice Provost for Student Affairs at USC, who are represented by the same law firm, Young, Zinn & Bate, LLP, filed an Opposition to Dixon’s Petition and Ex Parte Requests, also dated August 12, 2015. The 16-page Opposition, which contained no exhibits, focused largely on arguing against a stay of the expulsion.

Allee and Carry allege, “Petitioner is a former University of Southern California student who was expelled when the University found that he had forcible, non-consensual intercourse with Jane Roe, a fellow student, on the night of October 23, 2014.” (Opposition, Page 1.)

Allee and Carry allege that the record showed that Dixon “held Jane Roe’s arms so she could not move away from him, covered her mouth when she protested, put his fingers in her mouth when she exclaimed “ow,” and pulled her hair,” and that Dixon “admitted that he covered Jane Roe’s mouth during intercourse, pulled her hair, and put his fingers in her mouth.” (Opposition Page 2.)

Allee and Carry allege that prior to expelling Dixon, USC conducted a “diligent and impartial investigation,” spanning “several months,” and including the interviews of “five witnesses,” and a “review of photographs of the victim taken the day after the incident showing bruises on her arms and legs.” (Opposition, Page 1.)

Allee and Carry opposed Dixon’s request for a stay of the expulsion, stating that it “presents a risk of harm to the University’s other students.” (Opposition, Page 3.)

Allee and Carry argue that Dixon was afforded a hearing in that he “had multiple opportunities to present his side of the story, and did so in two interviews (where he was allowed to have an advisor present).” (Opposition, Page 6.)

What the Court Ordered

On August 12, 2015, Los Angeles Superior Court Judge Robert H. O’Brien issued an order stating, “IT IS HEREBY ORDERED that the sanction of expulsion, imposed as set forth in the letter of Respondent Ainsley Carry, dated May 12, 2015, attached hereto is stayed.”

What this means is that Dixon’s expulsion is on hold right now, pending full review of Dixon’s Petition on the actual merits of the case, including arguments on the fairness of USC’s investigation process into the underlying merits of the sexual misconduct claims. Judge O’Brien made no other orders, as to reinstatement on the football team, or anything beyond Dixon’s expulsion. However, after the matter is further reviewed, depending on how the evidence bears out, that may still be a future possibility.

Allee and Carry made a peremptory challenge to Judge O’Brien, basically asking to change judges, which was accepted, and so the case has been transferred to Judge James C. Chalfant.

The next hearing in the matter is set for November 5, 2015, and that is a Trial Setting Conference. Based on my experience with the Los Angeles Superior Court, unless the parties or judge move to expedite trial, it could be over a year before trial of this matter occurs.

Questions or comments, or any other legal topics in Trojan sports that you want to see covered? You can contact Lizelle via email to [email protected], or tweet her at @LizelleBrandt.