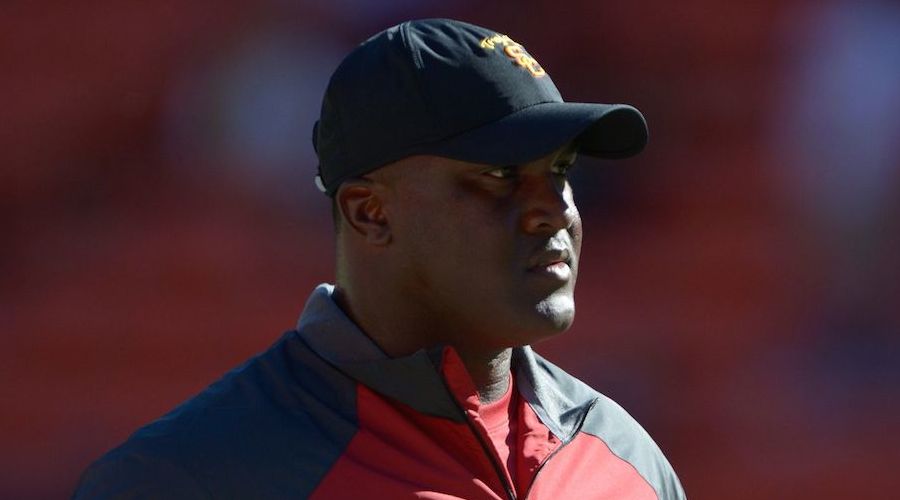 In a move that should be very popular among the USC players, and one that is well earned based upon the production that has been seen from his position group in his time with the Trojans, wide receivers coach Tee Martin has been promoted to offensive coordinator by Clay Helton.

Here is the complete story put out by usctrojans.com:

USC wide receivers coach Tee Martin has been promoted to offensive coordinator, new Trojan head coach Clay Helton announced today (Dec. 18).
“I am fortunate to have been around many good coaches throughout my career, but I have never been around a coach quite as complete as Tee Martin,” said Helton. “He has a unique ability to lead, organize, recruit, teach, game plan and call plays. In the second half of this season, Tee took on a greater coordinating role in game planning and play calling and I was very impressed with the job he did. I am beyond confident in his ability to lead our offense to new heights.”
Martin, 37, is in his fourth season (2012-15) at USC. In addition to coaching the wide receivers since his arrival at Troy (he will continue in that role), he added the pass game coordinator duties in 2014.
The 2015 Trojan offense currently is averaging 449.6 total yards and 34.9 points a game. It is in the nation’s Top 25 in completion percentage, passing efficiency and first downs. Wide receiver JuJu Smith-Schuster, a Biletnikoff Award semifinalist, earned All-American second team and All-Pac-12 first team honors while catching 85 passes for 1,389 yards and 10 TDs, and he ranks in the Top 20 nationally in receiving yards, receiving TDs and receptions.
Earlier in 2015, Martin was named among the nation’s Top 10 recruiters by Sports Illustrated and Sporting News, as well as the Pac-12 Recruiter of the Year by Rivals.com.
In 2014 under Martin, wide receiver Nelson Agholor made All-American first team and All-Pac-12 first team while catching 104 passes (third most in USC history) and he was a NFL draft first round selection, while Smith-Schuster was a Freshman All-American first teamer. USC was 15th nationally in passing offense. He was named the 2014 Scout.com Pac-12 Recruiter of the Year.

In 2013, wide receiver Marqise Lee became USC’s career receiving yardage leader and was an NFL second round pick. In 2012, Lee won the Biletnikoff Award and was an All-American first teamer, plus he was a finalist for the Walter Camp Player of the Year Award and Hornung Award and was the Pac-12 Offensive Player of the Year as he set Pac-12 season records for receptions (112) and receiving yards (1,680) while leading the Pac-12 in receptions, receiving yards, all-purpose yards and kickoff returns. Wide receiver Robert Woods was a second round pick in the 2013 NFL draft.
Before coming to USC, Martin was the wide receivers coach at Kentucky for 2 years (2010-11). He also served as the passing game coordinator in 2011. In 2010, Wildcat wide receiver Randall Cobb was an All-American first teamer and NFL second round selection, while wide receiver Chris Matthews tied for the Southeastern Conference lead in touchdown catches.
Martin began his coaching career as the passing game coordinator at Morehouse College in 2006, when the Maroon Tigers had the Southern Intercollegiate Athletic Conference’s top-ranked rushing, passing and total offense.
He then was the passing game coordinator and quarterbacks coach at North Cobb High in Kennesaw (Ga.) in 2007, helping the Warriors to a 10-1 record in the Class AAAAA ranks, and the offensive coordinator and quarterbacks coach at North Atlanta (Ga.) High in 2008.
He spent 2009 as the quarterbacks coach at New Mexico.
Martin was a 4-year (1996-99) letterman quarterback at Tennessee. After serving as Peyton Manning’s backup his first 2 years, he led the Volunteers to a 13-0 record in 1998, capped by the national championship following a Fiesta Bowl win over Florida State. He led Tennessee to another trip to the Fiesta Bowl in 1999 and was named All-SEC first team. He set NCAA game (23 versus South Carolina) and season (24) records for consecutive completions in 1998.
He was selected by Pittsburgh in the fifth round of the 2000 NFL Draft, beginning a 6-year pro career. After 2 seasons (2000-01) with the Steelers, he went to NFL Europe in 2002, when he led the Rhein Fire to a league-best 7-3 record and a berth in the World Bowl. He returned to the NFL with the Oakland Raiders in 2003, then moved to the Canadian Football League and spent the 2004 and 2005 seasons with the Winnipeg Blue Bombers.
He and his wife, Toya, have 2 sons, Kaden, 11, and Cannon, 3, and 15-year-old twins, daughter A’Yadra and son Amari.