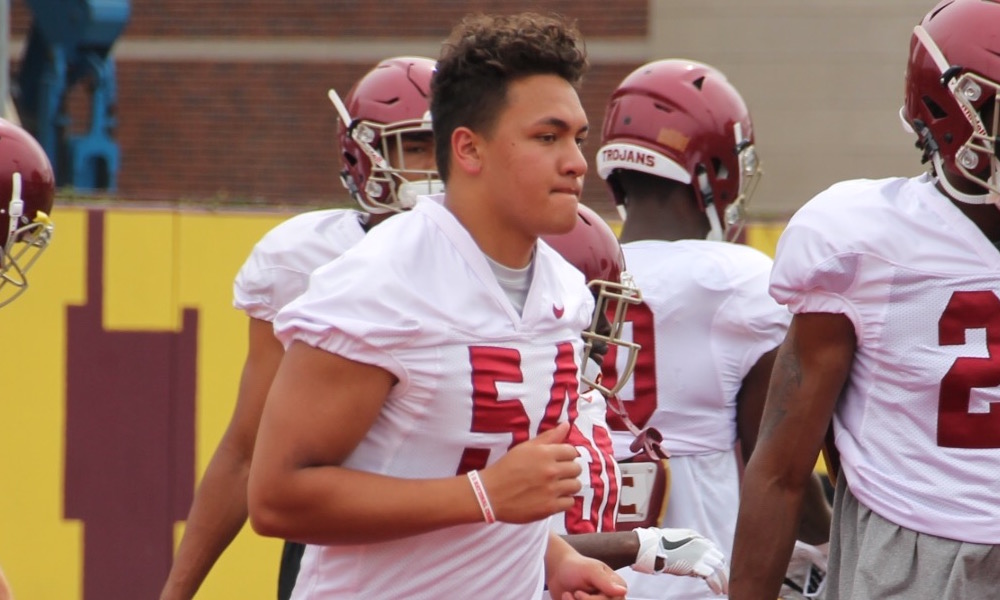 The 2020 football season is a cloudy picture in the time of COVID-19, as possibilities seem to range from the season progressing as normal, to the season being canceled completely. But the USC roster and linebacker room might have received a little clarity recently, as Tayler Katoa returned from his mission.

Katoa came to USC as a three-star linebacker prospect in the 2017 recruiting class, as the Trojans won a tough recruiting battle over Utah for the Layton athlete. Katoa starred on both sides of the ball in high school, as he was the starting quarterback and linebacker.

As a senior, Katoa threw for 299 yards and three touchdowns, and rushed for 784 yards and 14scores. He also tallied 36 tackles, two sacks and a fumble recovery that he returned 80 yards for a touchdown.

Katoa enrolled early at USC and slotted in at middle linebacker. After a strong start, a torn knee ligament sidelined Katoa during spring ball and for the entirety of his first year at USC.

The 6-foot-2, 230-pound linebacker then announced in the fall of his redshirt freshman season that he would be taking his mission. Katoa served in the Richmond, Virginia mission and returned this past Saturday.

There had been questions about his next step, as players usually return to their initial school after serving a mission, but many have opted for other programs, due to a decision either by the player or the school. Katoa announced Tuesday morning that USC fans can expect to see him back on the field for the Trojans, whenever that eventually happens.

This would be a really nice addition at linebacker for the Trojans. Katoa would be capable of playing either inside or outside linebacker in defensive coordinator Todd Orlando’s scheme. And while there is a lot of talent at both positions, Katoa showed during his short time at USC that he’s talented enough to push anybody if he’s up to the challenge physically and with a complete grasp of the playbook following his hiatus from football.

Linebacker and offensive line rank as the two positions where the starting positions seemed truly up for grabs, and there were going to be some fascinating battles there this spring.

Now, if Katoa is with the Trojans this fall, and Jordan Iosefa and Solomon Tuliaupupu are fully recovered from their injuries, the linebacker spot will be must-watch. Those three, along with Palaie Gaoteote, Kana’i Mauga, Ralen Goforth, Eli’jah Winston, Maninoa Tufono and Tuasivi Nomura give Orlando so much to work with at just a couple of spots. Throw in outside linebackers Hunter Echols, Juliano Falaniko and Abdul-Malik McClain, as well as the hybrid linebacker/defensive end potential of Drake Jackson and the Trojan coaches look set with more than a few options at linebacker this fall.