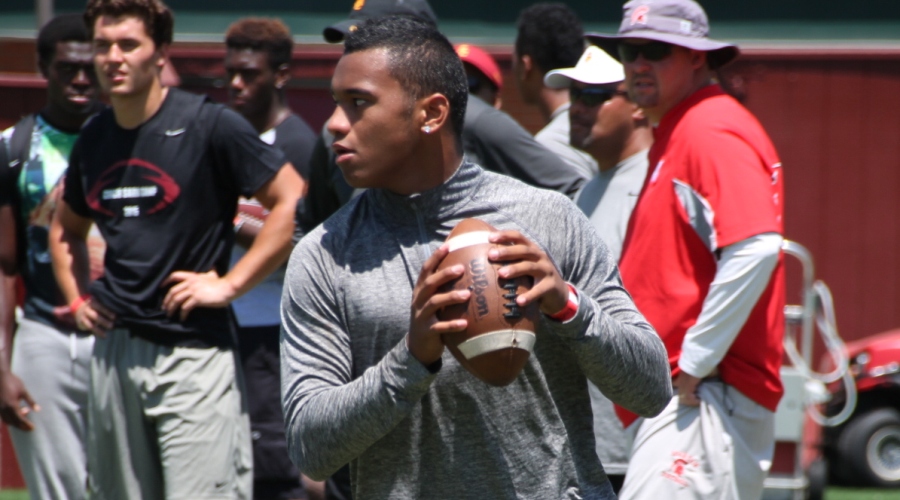 The top quarterback on the USC wish list, Tua Tagovailoa, will be making his college announcement tonight and it’s expected to be a two-team race between the Trojans and the Alabama Crimson Tide.

Tagovailoa (6-0, 215) is ranked as the #6 dual threat quarterback in the ESPN rankings but he has been the Trojans preferred choice at QB going back to last summer. Tagovailoa had a chance to work out in front of the USC coaches at the Rising Stars Camp in June and it only reinforced their belief in him as he showed off a strong arm at the event while throwing to future USC receivers such as Josh Imatorbhebhe and Velus Jones.

As much as any physical trait, however, what attracts many coaches and fans to Tagovailoa is his leadership factor. The soft-spoken lefty led St. Louis HS to a 6-4 record as a sophomore, and a 9-2 record as a junior, including the #2 ranking in the state. Along the way he completed 350 of 537 passes for 5,515 yards to go with 57 touchdowns and 10 picks. And even though he is identified in rankings as a dual-threat quarterback who will naturally draw comparisons to fellow Hawaiian Marcus Mariota, Tua is much more comfortable in the pocket as a pure passer. That’s not to say he can’t run, but the dual-threat ranking is a bit deceiving in this case.

Tua has been a long time USC fan and the Trojans have been considered the favorites up until the last month when he and his family made an unofficial visit to campus to meet with Clay Helton and the coaches. Everything went as well as could be expected on that trip and it looked like a good bet to see him eventually end up in Cardinal and Gold.

But things have changed in recent weeks after a southern trip for Tua and family that included a visit to defending national champion Alabama. As can often happen when you are the defending champs, Tua was clearly impressed with what the Tide had to offer, and the rumblings quickly began that he could end up in Tuscaloosa, especially after his dad gave an interview which raved about the visit and where he could see his son end up going to school.

It wasn’t too long after that trip that Tua set the announcement date for May 2nd. The rumor mill naturally speculated that the choice would be Alabama considering the vibes coming off the trip, and the Trojans have been forced to play a waiting game in the meantime. Will the long-standing good feelings for Tua toward USC end up with him as a Trojan? Or will the lure of playing for the national champions prove to be too much? We find out tonight.