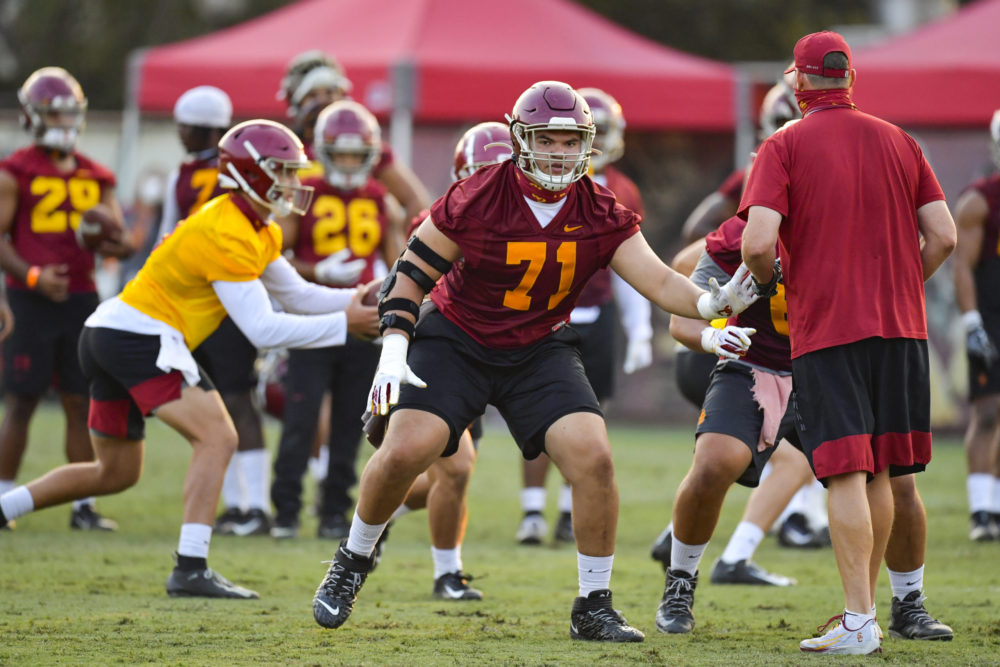 Scanning the potential depth chart for the 2020 USC Trojans and looking back at the history of those players, there might not be a more unlikely starter on either side of the ball than Liam Jimmons at right guard.

Jimmons was the lowest-rated high school prospect that signed with USC in the 2016 class, and at the time, he was a 240-pound high school senior who played defensive end and tight end.

USC coaches thought they had something when they grabbed a commitment from Jimmons in the summer of 2015, but they didn’t know exactly what. And there’s no way they knew for certain that they had a budding 6-foot-4, 315-pound potential NFL Draft pick at offensive guard.

Jimmons remembers well the two days that greatly impacted his life. The first, he calls the most tiring day he’s ever experienced. After waking up early to take the SAT that morning, Jimmons drove from Huntington Beach to Los Angeles in order to participate in a USC summer camp.

“We absolutely wore him out one day,” recalled head coach Clay Helton, who was serving as USC’s offensive coordinator at the time, before taking over as permanent head coach later that year. “He earned his scholarship that day, just the way he was able to compete and really able to take coaching.”

Jimmons said he participated in drills as a defensive lineman and an outside linebacker, then moved over to tight end and, after catching a pass from USC quarterback Cody Kessler, was offered a scholarship by head coach Steve Sarkisian.

“He walked over and shook my hand and gave me the offer,” Jimmons said. “I was seeing stars because I was so tired…I will never forget that day.”

Jimmons drove back up to USC the following day and committed to the USC coaches. From there, it was just a matter of figuring out where exactly Jimmons would wind up on the USC depth chart.

“At the beginning, I was willing to do whatever coach Helton put me at,” Jimmons said. “I considered myself an athlete, but I thought I was better at defensive line than offense. I liked playing defensive line, sacking the quarterback, making big hits.”

Jimmons said that was because his offensive history was at tight end, not offensive line. Helton said they have a history of allowing potential multiple-position guys to start their careers at their position of preference. It takes a different amount of time to figure out if that’s the right choice or not.

“I remember Marqise Lee, who we thought was going to be a first-round draft pick at corner, came to us and said, ‘Coach, I want to be a wideout. Just gives me four days,'” Helton said. “It didn’t take four days. It took four plays, and we knew exactly what he was.”

In Jimmons’ case, it looked as though there would be some long-term development needed, but that eventually he could become a solid contributor. It wasn’t surprising that he redshirted his first season, as he came in as the nation’s No. 942 overall prospect in that 2016 recruiting class. But the following year, he played in 10 games and finished with five tackles as a redshirt freshman in 2017. Then he played in 11 games and had six tackles and a sack in 2018.

That’s the season the idea of flipping over to the offensive line entered Jimmons’ head, but it wasn’t really cemented until he sat down with Helton in the spring of 2019. He said he felt his body growing in a way that might benefit him more on the other side of the ball. Helton agreed.

“As he grew, we saw his athleticism that could transfer over to offense, and the need for a player like him on offense,” Helton said. “Where he was a contributor on defense, we thought his value and worth would be even more on offense.”

Jimmons didn’t need much convincing. His path to extended playing time on defense was a bit blocked by guys like Rasheem Green, Malik Dorton and Porter Gustin. There is always a risk in a player making a position switch, especially late in a career. It’s easy to get buried on the depth chart, and there’s no guarantee the switch will work, in which case a player can get stuck in a no-man’s-land of sorts. Jimmons said he considered that possibility, but he only considered it to make sure he pushed past any fear of it.

“I thought about that hesitation a lot,” Jimmons said. “But I didn’t want any regrets. If I’m going to do this, I’m going to go all out. I wanted to get a restart, go full blow and see how it turns out.”

Less than a year after switching to offensive line, Jimmons made starts against Colorado and Iowa last fall and was a major contributor as a backup right guard. It was noticeable how quick he was able to jump into the two-deep along the offensive line, and what a natural fit the position seemed to be for him.

“I think I came in wanting to earn a spot,” Jimmons said. “I came in thinking I was just as good as any other offensive linemen. I knew going in with a losing mindset wouldn’t help me at all. I just wanted to learn the technique and do whatever it takes. Once I came to fall camp, I realized I can actually do this thing.”

Jimmons’ first action was against Washington, where he had a few nice blocks on running plays to his side. He played against Notre Dame the following week, then, two games later, he was called on to start at right guard against Colorado.

“Once I had that Colorado game, when I started, that’s when I realized that I can actually be a productive person on the field,” Jimmons said.

He credits offensive line coach Tim Drevno for what he said has been a smooth transition to the offensive line. He remarked that Drevno is an outstanding coach when it comes to teaching those fundamentals, and he has an ability to teach each player in a way where they can understand all aspects of the lesson. He said his familiarity with studying offensive schemes, alignments and motions made the mental aspect of the switch feel very natural. But he’s worked hard to get the physical aspect down.

“I think the biggest hurdle was knowing my technique on every play,” Jimmons said. “I feel like on defense, you study the offense way more than the offense studies the defense, so I understood a lot about offenses already. But the individual technique is what coach Drevno taught me.”

Now, Jimmons is lining up with the first team offense at right guard, between Neilon and Jalen McKenzie. Whether he locks that spot down or winds up as a valuable backup this season, this has to be seen as an entirely successful position switch and career path for Jimmons–who would have the opportunity, like all fall student-athletes, to return for another season next fall. Now, as Drevno, Harrell and Helton look for the right pieces along the offensive line, Jimmons might stand as one of the more important players on offense. Finding the exact right mix might come with clicking Jimmons in at right guard, between Neilon and McKenzie, with Alijah Vera-Tucker at left tackle and Andrew Vorhees at left guard. But Justin Dedich, Liam Douglass, Jason Rodriguez and a host of true freshmen are pushing those veterans.

Helton and Harrell have been effusive in their praise for the offensive line so far, saying that they fully believe it will be able to lead this offense in 2020. Jimmons agrees.

There are team leaders stretched across every position group on offense for the Trojans, but the offensive line might be the most veteran position on the team, with multiple-year starters returning in Vera-Tucker, Vorhees and Neilon, as well as McKenzie having started 14 games in his career. The redshirt senior Jimmons added to that group makes it one of the most experienced in the conference and maybe the country. It’s a line that Helton and offensive coordinator Graham Harrell have talked up during the early stages of fall camp. The group knows how much pressure will be on them to make sure the USC offense is clicking, but Jimmons said it doesn’t have a lot to do with last year or the year before. It’s something that’s felt just by putting on the uniform.

“There’s always something to prove, especially when you play for USC,” Jimmons said. “People expect greatness. We expect to go 6-0, go to the Pac-12 Championship and win it. That’s our mindset right now, and we have something to prove as an offensive line because we lost Austin Jackson, so we want to prove we’re still a really good offensive line.”

Defensive coordinator Todd Orlando spoke earlier this week about how important it is to be able to evaluate players in full pads while participating in full contact. Jimmons said there’s already a noticeable difference in the defense this year compared to last year, both in the variety of what the offense is seeing and the energy with which the defense is playing. He’s also not surprised by that, considering he said he thought Orlando was a strength coach when he first arrived because of the constant energy and intensity he brought to everything he did.

Jimmons said the added intensity on that side of the ball has been a good thing overall as he said they’re trying to build that into their culture. He also said the offense is more than willing to meet that level of energy during practice, and will be up for it during the fall camp scrimmages.

“Every time you step on the field you’re trying to earn a spot, but with full pads, it brings out the real players,” Jimmons said. “When we’re in shells, half pads, players can sometimes slow down. Full pads brings full go from everyone. It jolts the team into a frenzy. I like full pads, and scrimmaging in the Coli is always fun.”