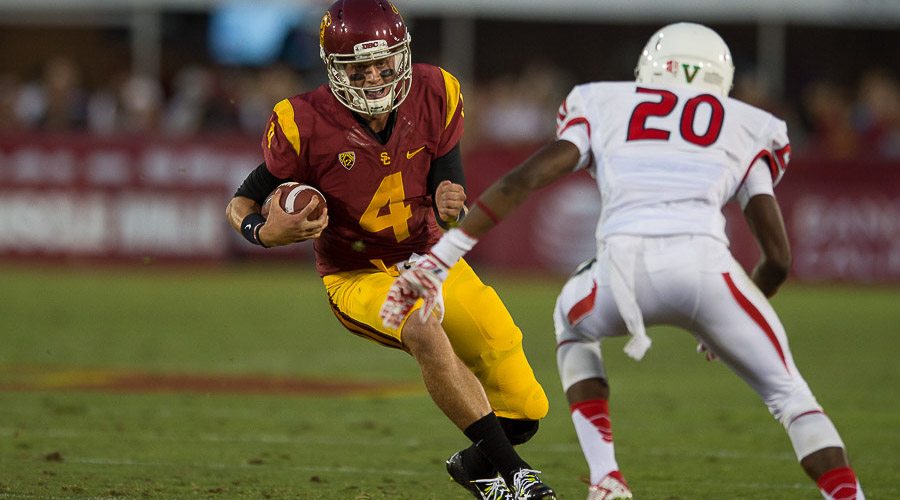 USC’s Sunday morning practice finished on a dramatic note as placekicker Andre Heidari, given the opportunity to end the workout after just one hour, drilled a 38-yard field goal attempt – much to the delight of his cheering teammates.

Heidari’s converted attempt marked the conclusion of a fast-paced session that had the Trojans focusing almost entirely on 7-on-7 and 11-on-11 work.

“Obviously, a little shorter in duration of practice, but a lot of football today,” said USC head coach Steve Sarkisian. “We really just went out and played football. I felt like it’s important to do that, as we’ve been talking about the last couple of days. It can’t just be a light switch come game day. You have to practice football. We love the drill work and all of those things, but inevitably today was just about getting out here and playing. We got about 75 plays done at good tempo in about a hours time, which was really good.”

Following practice Sarkisian said that the team was eager to find out their bowl destination, which is set to be announced by the Pac-12 Conference at 2:30 pm.

“We find out today where we’re going,” Sarkisian said. “I know the guys are anxious to find out, and who we’re playing and all of that stuff. It’s obvious the suspense is building here for everybody, for all of college football. We’re a piece of it, so we’ll see where we go and start the process of preparing for that game.”

Williams not ready to decide

USC junior defensive lineman Leonard Williams, who has been projected by some as the No. 1 overall pick in the 2015 NFL draft if he opts to leave early, said following Sunday’s practice that he still hasn’t made a decision.

“I really haven’t to be honest,” Williams said. “I’m thinking about it all the time more and more as it’s coming to an end, and it’s a hard decision for me. I’m pretty sure I’ll make it after the bowl game.”

And while there are certainly plenty of obvious factors drawing him to the NFL, Williams said that he also sees a number of reasons to stay, making the process that much more difficult.

“My family that I’ve grown to have here – I’m talking about my coaches and my teammates – it’s going to be hard to leave those guys,” Williams said. “And also just being a Trojan, and never being able to beat UCLA, and just being able to come back and fight for a national championship and a Pac-12 championship next year. There is a lot of stuff that is tying into it.”

Just one day after sitting out the Trojans’ entire practice session after having rolled his ankle on Friday, freshman wide receiver JuJu Smith was suited up on Sunday and, once again, making more than his fair share of highlight-reel plays, including one leaping catch in a 11-on-11 period despite tight coverage by Adoree’ Jackson.

“That’s just him,” Sarkisian said. “You guys are starting to understand the stuff that we really see with him every day, not just on the field but in the building, in the classroom – that’s just him. When he’s going, he goes and it’s full steam ahead.”

– Chris Hawkins, normally a cornerback, spent his third consecutive day at safety, and he said that he’s willing to remain there if the coaches want him to.

– Safety Leon McQuay III wore a yellow jersey and appeared to participate in a limited role. He continued to wear a brace on his knee.

– Following practice Sarkisian brought up three freshmen who have stood out to him over the course of the last three days – cornerback Rahshead Johnson, offensive lineman Chris Brown and defensive lineman Malik Dorton.

– Sarkisian also praised the play of second-year freshman quarterback Max Browne and said that he took some reps with the No. 1 offense on Sunday. He said that freshman Jalen Greene has flashed at times, but that he’s also put the ball on the ground too much.

– Sarkisian, who has a vote in the Coaches’ Poll, revealed his top 4, and it wound up being identical to the College Football Playoff’s top 4 – 1. Alabama 2. Oregon 3. Florida State 4. Ohio State

– Sarkisian was in a hurry to get through his post-practice media scrum. He said that he had to go recruit.