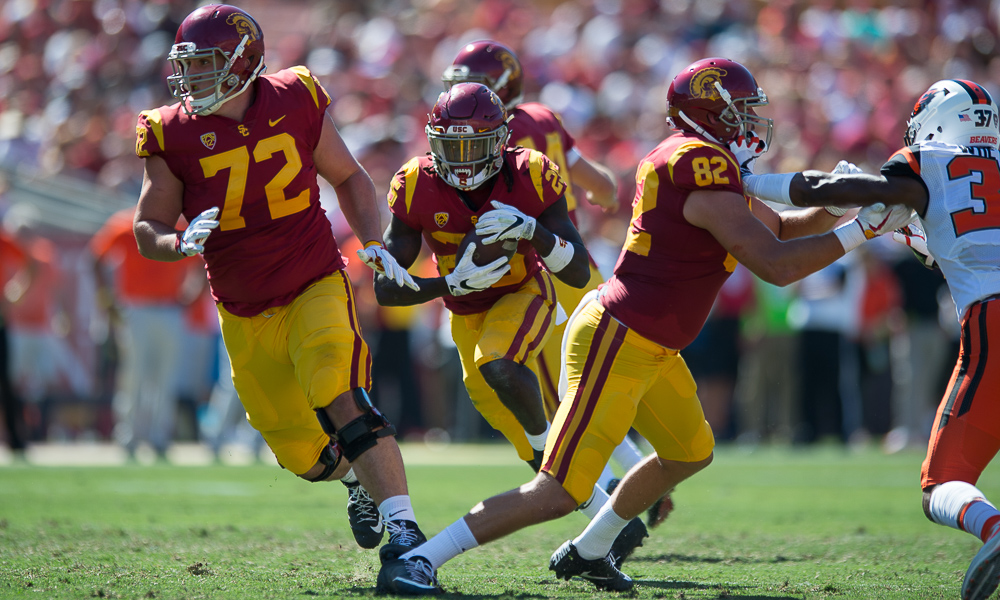 One of the things we saw this year with all the injuries is several reserve players along both sides of the line who stepped up with mostly positive results, including contributions from multiple younger players.

On the offensive side of the ball, there can be no better example of that than the Washington State game where the Trojans lost three starters and had to turn to a pair of true freshmen and a redshirt sophomore who had barely played. The immediate results were predictably bumpy but as the season went along one of those true freshmen (Andrew Vorhees) ending up replacing the injured Viane Talamaivao at RG for the remainder of the year and showed himself well for a first year player. Andrew is very strong, gets praise from his coaches for his willingness to learn and study, and will be a foundation for the o-line moving forward. As for the other two, Austin Jackson played well enough in multiple stints that it’s natural to continue to think of him as a future starting left tackle for the Trojans. That in and of itself is enough to think of Austin’s play this year as a successful audition. Clayton Johnston was one of those guys who rarely played and wasn’t expected to contribute much but moving forward he is a tackle that the coaches know they can throw in there if needed.

There also needs to be a mention of Jordan Austin and what he did in the Pac-12 title game. Like Johnston, Austin hadn’t played a meaningful snap to this point in his USC career but with the injury to Vorhees in the game, the opportunity was there for Jordan and he made the most of it. There was one false start but other than that he was running around and hitting people, that was good enough for me in that situation.

Roy Hemsley got some extended reps in the UCLA game when Chris Brown went out at left guard and had a solid effort.

What that means for the line next year is the benefit of knowing that reserves like Johnston, Austin and Hemsley have been thrown into the fire and can hold their own, while guys like Vorhees and Jackson showed why they will likely be two of the five starters on the line for spring, especially if Toa Lobendahn moves to center.

On the defensive side of the line with the front 7 the number of players stepping up was truly impressive. You have to start with Christian Rector and what he did to fill in for the injured Porter Gustin. It required a move from the inside to outside for Rector and some scheme adjustments for Clancy Pendergast but Rector ended up providing a completely different skill set in the pass rush and he ended the year being named 2nd team all-conference.

The next person I want to mention is Malik Dorton, who by the end of the season was consistently providing solid minutes in the middle. Malik was a high school DE who has built his body for the move inside and it’s paying off.

You also need to credit Jordan Iosefa for the move he made from ILB to OLB in place of Rector when Christian hurt his hand. The move happened midway through the ND game, and Jordan got his first start against a true run threat QB in Khalil Tate, and he played well enough that I think he stays at an OLB spot moving forward, perhaps flipping over to take the spot when Uchenna leaves.

And then there is Mt. Pili. Brandon was headed for a redshirt year until injuries to Josh Fatu and Marlon Tuipulotu changed those plans. That is just a big, athletic man who is fun to watch. Can’t wait to watch his development under Kenechi Udeze because you get the feeling he is just scratching the surface of his ability.

And the impact of Kenechi, along with Johnny Nansen, has to be acknowledged when looking at how many players filled in and performed well enough to the point where USC led the nation in sacks (which was helped with veteran stars like Rasheem and Uchenna). But when you look ahead and think of adding guys like to the mix like Jay Tufele and Hunter Echols, along with Levi Jones who looked very promising this year, the narrative for the Trojan front seven is strong.

Two guys we didn’t see much from, surprisingly so, were Connor Murphy and Oluwole Betiku. It’s just really a surprise to me that neither guy has broken out yet but they are only halfway through their SC careers and plenty of time for that to happen.