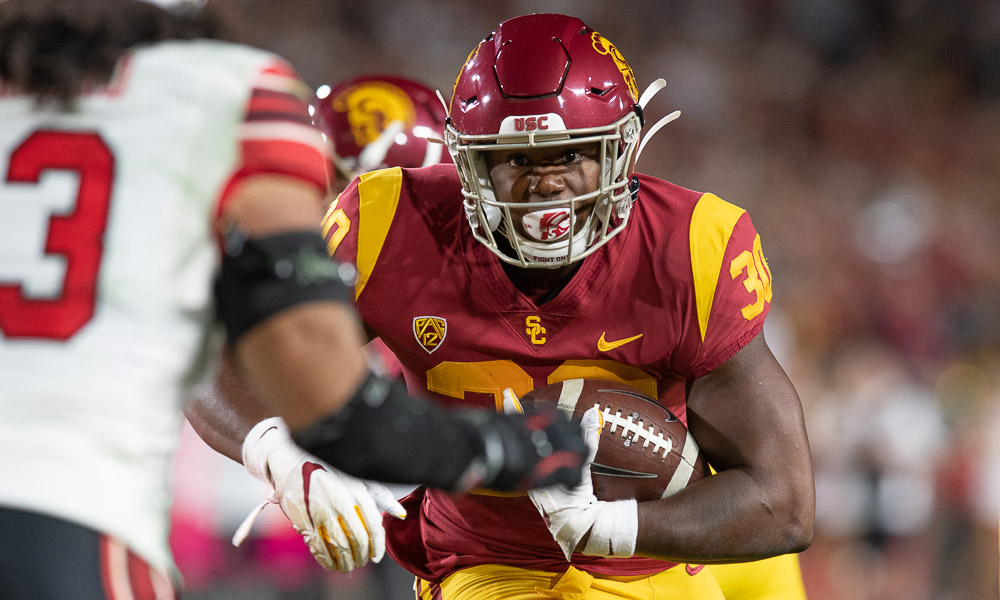 Kedon Slovis. Jay Tufele. Amon-Ra St. Brown. Talanoa Hufanga. USC has its share of well-known and established starters on both sides of the ball. Here, we take a look at some of the other players who could be counted on to help take the Trojans from good to great this season, as USC will need members of just about every position group to take that next step if USC is going to accomplish its team goals in 2020.

The goal of this exercise is to pick one or two guys at each position that are young or unheralded, as non-obvious guys who could be key to that unit’s success this season. And admittedly, this whole thing falls apart as soon as we get started with quarterback.

At this point, there really isn’t anything to discuss at the quarterback position. It’s Kedon Slovis vs. The Sophomore Slump. If Slovis is even only as good as he was during his freshman season, the Trojans will be just fine at the position. But undeterred, we’ll move on to the rest of the offensive positions, which will be critical in both protecting Slovis from injury and decreasing the burden on his right arm.

There aren’t many unknowns at running back, as USC fans–unfortunately due to injury–were able to get acquainted with all of them last season. The Trojans played long periods without Stephen Carr, Vavae Malepeai and Markese Stepp last year, though all three should be back and healthy for the start of this season.

The two seniors should have a big impact this season, but the answer here is Stepp. The biggest question mark at the position is whether Stepp is ready to handle all the aspects of the running back position in this offense–namely pass blocking and catching the ball out of the backfield–because the biggest exclamation point at the position comes if he is. The bruising Stepp is capable of providing the biggest boost to the offense if he can show he’s capable of that, as his ability with the ball in his hands to gain tough yards and punish defenders might even surpass Malepeai, who is no slouch when it comes to that.

At wide receiver, there are three knowns, in St. Brown, Tyler Vaughns and Drake London. And while I’m tempted to go away from Bru McCoy here since McCoy has received so much attention already, I just can’t. He’s too good and too ready to have a big season. Offensive coordinator Graham Harrell has talked about needing eight receivers in this offense, but the Trojans showed last year that four is enough when the receivers are this good. And McCoy is this good.

USC has to find a replacement for Michael Pittman. He was so dominant at times that just spreading out his catches to other receivers isn’t enough. The Trojans need a physical mismatch who can control a game from the slot or perimeter and the 6-foot-3, 220-pound McCoy is that. I’d anticipate that St. Brown, Vaughns and London could all see their stats improve this year over last year, but getting McCoy–whose presence becomes even more important after Kyle Ford’s ACL injury–to play at the level he’s capable of could keep this unit as one of the best in the country, rather than just battling to be the best in the conference.

The tight end spot will be interesting to watch, as USC didn’t get much out of the position in 2019. Getting Daniel Imatorbhebhe back in the mix will be a major boost, but this feels like a position where you can take a shot at just about anybody because USC proved last year that it could still move the ball without much contribution from the position at all.

And with that, we’ll go with Jude Wolfe, a redshirt freshman who made a major impact during his first spring ball but had a setback due to injury. He showed an ability to impact the passing game, and that’s clearly a requirement for the tight end in this offense. He’d need to jump at least two seniors to make an impact this season, but if we’re talking upside and the ability to contribute equally in all phases, Wolfe’s 6-foot-5, 250-pound frame and solid hands make him one to watch.

The offensive line portion of this could simply be a list of every player expected to spend any amount of time in offensive line coach Tim Drevno’s meeting room this season. No position is more important to USC’s offensive success this season, and possibly the success of the team overall.

There are probably a handful of players who could go here, but Liam Jimmons is the guy we’ll watch. The left side of the line could be set with Alijah Vera-Tucker and Justin Dedich at left tackle and right guard, respectively (Dedich was almost the choice here, as his ability to play left guard at a high level is the key in allowing Vera-Tucker to slide out to tackle). Brett Neilon (who was almost the choice here as potentially the only lineman returning in the same position) will be critical in his ability to oversee a line with some changing parts. But that right side of the line still seems to have the most question marks, just as it did heading into the 2019 season.

If Jimmons can settle in at right guard, Jalen McKenzie (almost the choice here) could slide out to right tackle–where he played last spring before moving inside following the arrival of graduate transfer Drew Richmond. Jason Rodriguez (another potential choice for this spot), Andrew Vorhees (and another potential choice) and Liam Douglass (and another) could have something to say about those two spots on the right side. But no player could have a bigger impact than if Jimmons can take his play from defensive-lineman-turned-offensive-guard, to an All-Pac-12 caliber offensive lineman as a redshirt senior. Last season, Slovis took a few major hits, and while the line would likely share the blame for all of them, two of them–the one that knocked him out of the Utah game and one against Iowa that resulted in a penalty, came over right guard.