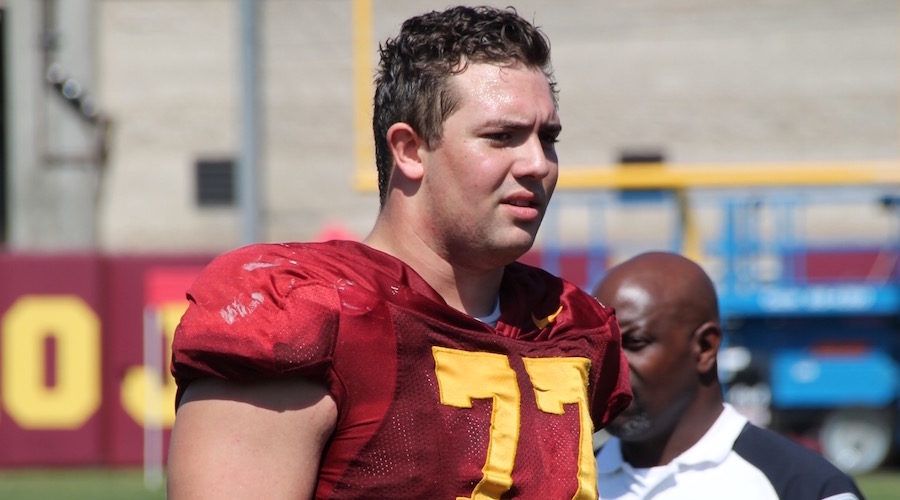 For now the Trojans must focusing on filling the big hole at defensive end without Bigelow in the starting line-up. Fortunately, there is a guy like Jacob Daniel who will likely move into a starting role to join Rasheem Green and Noah Jefferson. It remains to be seen if Jefferson would stay at nose, where he had been until recent back issues, which would mean Daniel at DE or if the roles would be reversed. The next man in at DE would be Malik Dorton, who has made progress as he has added bulk but who has yet to make any meaningful contribution in a game. If Daniel moves up it also takes away the top reserve at nose, and right now that would mean early enrollee freshman Liam Jimmons is taking snaps as the #2 NT.

It didn’t come as any great surprise on Saturday after the scrimmage when Helton said for the first time publicly that one of the QB’s was ahead in the competition, and that the QB was Max Browne. After all, Max is entering his fourth season in the program and is as seasoned as you could want him to be. And Max has performed at a very high level in spring to show that he is indeed ready for the job. But it was also interesting to hear the news from Helton on a day when Sam Darnold, Browne’s primary competition, had a pair of touchdown passes, including the only “explosive” play of the day for the offense with a 30-yard score to Ajene Harris. Darnold has performed best in competition situations and the scrimmage, to the point where the job isn’t ready to be turned over to Browne just yet, even if he is ahead at this point.

One of the most important pieces that will need to come together for this Trojan team to be successful is the offensive line, and new position coach Neil Callaway is patiently looking at all options before he decides on his starting five. At left tackle, Chad Wheeler has returned at well over 300 pounds, and we’ve also seen Zach Banner taking plenty of reps with the 1’s at LT as well. Zach is still the starter at RT most of the time, but when he lines up at LT we see Chuma Edoga in there at RT.

At the guard spots, there has been almost equal platooning between the duos of LG Damien Mama and RG Viane Talamaivao, who are sharing time with LG Chris Brown (photo above) and RG Jordan Simmons. It still stands to reason that Mama and Viane will be the starters but you never know what can happen with a fresh set of coaching eyes and expectations. At the very least Brown and Simmons are being given every opportunity to show what they can do.

At center, the likely first two options (Toa Lobendahn and Khaliel Rodgers) are out with injuries so we’ve been seeing Nico Falah and Cole Smith. That will be some nice depth in the fall when everyone is back.

Let’s talk one surprise on each side of the ball.

For offense, I’m going to go with Ajene Harris. When this guy is healthy all he does is make plays, and he’s been doing that ever since he walked on campus as a true freshman. His biggest problem, however, has been staying healthy but he’s been on the field through the first half of spring after recovering from a hip injury and looking every bit a challenger to Steven Mitchell for playing time in the slot.

For defense, Uchenna Nwosu may be a bit undersized ideally for an OLB spot but he hasn’t shown any problems so far in holding down the starting spot opposite Porter Gustin.

It’s been an impressive array of prospects who have stopped by a USC spring ball practice thus far. Whether it is committed players like RB Stephen Carr, DB Thomas Graham and safety Bubba Bolden, or uncommitted recruits such as OL Wyatt Davis, WR Joseph Lewis & Jalen Hall, OL Henry Bainivalu or DT Martin Andrus. And there have also been visits from signees such as Jackie Jones, Frank Martin, Trevon Sidney and Tyler Vaughns.