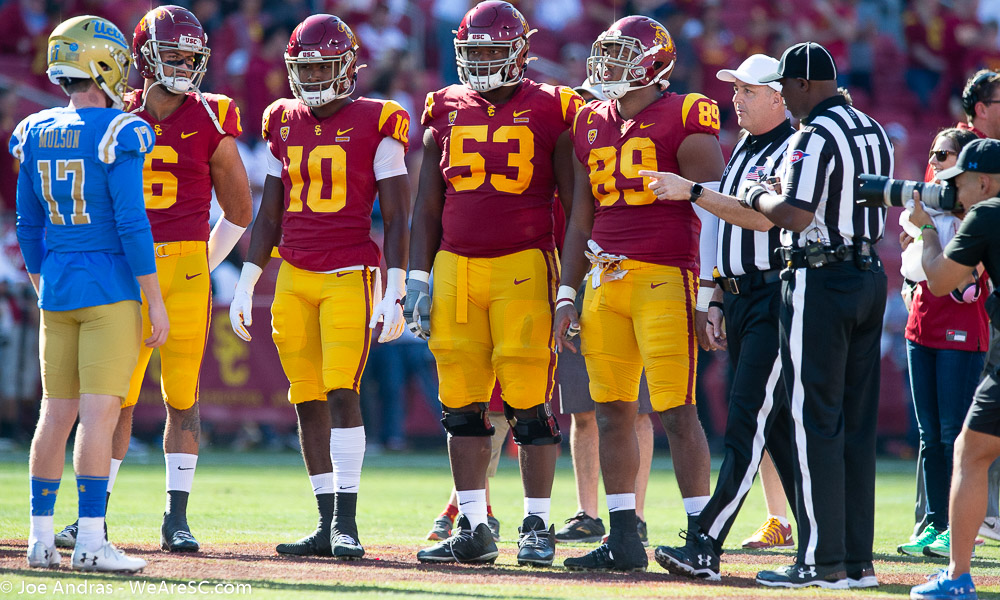 “So what, now what?” was a rallying cry we heard from USC players and coaches at various points throughout the season. It appears to have come from Dr. Kevin Elko and was a mantra was used by Alabama’s football program as it bounced back from a 2014 national championship game loss against Ohio State to win the 2015 title over Clemson.

Right now, it’s a pretty appropriate question to ask of the USC program.

USC finished the 2019 regular season having won five of its final six games. That, combined with the 3-3 start, left the Trojans at 8-4 and on the outside looking in at the Pac-12 Championship Game. While it’s definitely an improvement from 2018’s 5-7 record, what we saw this season and what things look like right now mean the Trojans are facing some significant questions that need answers in a time frame ranging from immediately to before the 2020 season.

The biggest question of the year has already been answered, as Clay Helton will return as head coach of the USC Trojans in 2020. While it elicited plenty of strong reactions, it’s a decision that is now behind us. But that doesn’t give much clarity to many subsequent questions, starting with…

What happens with the assistant coaches?

Offensive coordinator Graham Harrell was a bright spot overall for the Trojans during the 2019 regular season. There were some mistakes and questionable calls sprinkled in, as there are with any coordinator, but it’s clear to see the offensive improvement from 2018 to 2019, and undeniable that he helped true freshman Kedon Slovis to one of the most impressive seasons for a USC quarterback, regardless of class.

Now, the Trojans must decide how much they want to keep Harrell, as he has already taken multiple interviews at other programs, including head coaching positions. If Texas puts on a full-court press to bring him in as the offensive coordinator, can USC hold onto Harrell? Clearly this offense improved the more reps the players took in it, which is exactly what Harrell said would happen. Would the talent of the USC offense be able to adjust quickly enough if forced to go to a different system?

Questions exist with the other two coordinators as well, though for different reasons. Will USC bring back defensive coordinator Clancy Pendergast and special teams coordinator John Baxter, two coaches with whom Clay Helton is extremely confident and comfortable. The statistics say that a change could be warranted, but we’ve heard coaches and athletic director Mike Bohn blame injuries repeatedly, which could give Helton the opportunity to retain them. And if a change is made, who could USC target that would be willing to step into a situation that has been stabilized for now, but could get rocky again in a hurry depending on the outcome of USC’s season opener against Alabama next fall.

The timing of the eventually decision will be interesting as well, as Helton certainly wants to put together a positive performance in USC’s bowl game, and doing so without multiple assistant coaches is probably not the way to get that done. But would that hinder USC’s ability to put together a strong recruiting class that might be boosted by a splashy coordinator hire?

It sure sounded like changes would be made moving forward, and looking back at how several of the new hires performed last season (Greg Burns with defensive backs, Chad Kauha’aha’a with the defensive line, Mike Jinks with running backs, Keary Colbert with wide receivers and Harrell with the quarterbacks) it’s tough to find much fault in any of those decisions. Helton has now been afforded to make more decisions with his staff, and we’ll see (whether he stands pat or makes changes) whether he makes the right calls.

How does USC perform in the Holiday Bowl?

The Trojans are headed to San Diego for the holidays, as USC will face Iowa in the Holiday Bowl on Dec. 27. Iowa’s three losses this season came by a total of 14 points against teams that finished the season ranked Nos. 8, 10 and 14. It’s not a team that lights things up statistically, as the Hawkeyes did not have a 3,000-yard passer, a 600-yard rusher or a 700-yard receiver this season.

What happens during the early signing period?

After two recent decommitments, USC’s 2020 recruiting class ranks 86th in the nation. True, it’s with just eight commitments, but Georgia has just 15 and ranks No. 6 overall. And it’s not just a numbers game, where the volume of recruits is the reason USC ranks so low. Clemson, Alabama, LSU, Ohio State and Georgia rank first, second, third, fourth and sixth, respectively. And looking at their classes, Clemson’s No. 3 prospect, Alabama’s No. 1, LSU’s No. 2, Ohio State’s No. 4 and Georgia’s No. 4 prospect all come from California. The Trojans are missing out on elite prospects in this cycle.

Now, USC’s class is not going to finish No. 86 in the nation. They’ll bring in a few four-star prospects and the Trojans will close this class stronger than they started it. But can they do enough with truly elite prospects such as five-star linebacker Justin Flowe (Upland, Calif./Upland) to convince them to sign with the Trojans or even just hold off on signing elsewhere during the early period?

The Trojans will also have the ability to hold a few scholarships in reserve, as the transfer portal is again filling up with players at an incredible rate. Saving a few spots for an impactful graduate transfer, or even a younger player that would have to sit out a year but provide meaningful scout team reps, could be the way to go rather than taking bodies in mid-December just to incrementally move up the rankings.

USC will be without wide receiver Michael Pittman, right tackle Drew Richmond, defensive end Christian Rector and linebacker John Houston Jr. next season. But that’s it as far as departing starters. The Trojans could bring back nine starters on both sides of the ball and might even enter the 2020 season as Pac-12 favorites. But left tackle Austin Jackson, wide receiver Tyler Vaughns and interior defensive tackles Jay Tufele and Marlon Tuipulotu are all guys who could potentially leave early for the NFL Draft. And if any of those linemen make that decision, it could really hurt, as the Trojans don’t appear to have the depth on hand to immediately replace them.

There is also the question of the transfer portal as it pertains to USC players exiting the program. What happens with the coordinators and position coaches could go a long way toward determining those decisions for some players, but it’s also likely that a few players lower on the depth chart will look elsewhere due to the success that several USC transfers had this season, including wide receiver Randal Grimes at UNLV, and wide receiver Josh Imatorbhebhe and defensive end Oluwole Betiku at Illinois.

What happens at quarterback?

It’s not often a quarterback turns in the greatest true freshman season in his school’s history and there are questions as to whether he will be the starter the following season. For some people, it appears to be an easy to decision to slide Kevin Slovis back into the starting spot and give him the keys permanently. But with JT Daniels working to get ahead of his recovery timeline for a torn ACL (no surprise to anybody), it looks as though the Trojans could have another quarterback battle during 2020 fall camp. Daniels has been involved in two quarterback competitions under Helton and won both of them.

Matt Fink has already explored his transfer options once, and now that he’s had some time as USC’s quarterback, could be interested in a shot at real playing time elsewhere for his final season. The Trojans don’t yet hold a commitment from a quarterback in the 2020 class. Depending on how things shake out, could USC be left shorthanded at quarterback again next season if second place in the quarterback competition eventually elects to transfer?