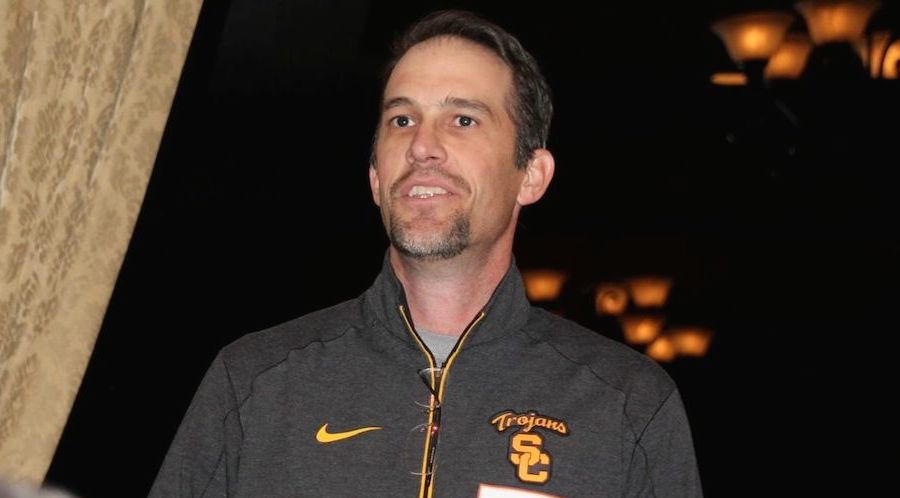 The Trojan Spirit was alive and well at the San Gabriel Valley Trojan Club dinner last week. With the Trojans fresh off a memorable signing day, and with speakers that included new QB coach Tyson Helton (photo above) and former All-American defensive lineman Shaun Cody, there was a definite cardinal-and-gold buzz in the air.

SGVTC president Sean Kennally got things started by introducing his club board members, athletic department representatives and the Trojan Dance Force girls, who were there to help conduct the raffle.

Kennally then brought emcee Shane Foley to the stage, and he had Shane tell the crowd about his recent job move from Wells Fargo to Capstone Partners.

The first item on the agenda for the evening was the presentation of the Jess Hill Award, which goes to a deserving student-athlete who had graduated the previous year. Past recipients of the award have included Alex and Khaled Holmes, and Jeff Byers. This year the winner was diver Haley Ishimatsu, a four-time diving All-American and two-time Academic All-American. Ishimatsu was unable to attend the dinner due to an out-of-town work commitment, so her diving teammate Natalie Kalibat accepted the award on her behalf.

Kalibat opened by talking about her excitement upon hearing the news as an incoming freshman that Ishimatsu would be transferring from Duke to USC. Kalibat called Ishimatsu a celebrity in the diving world at that point, “a diving goddess”, having appeared in the 2008 Olympics and on the cover of diving magazines. The two ended up being road roommates for three years, and Kalibat praised Ishimatsu for being such a giving teammate. Kalibat closed by saying Haley Ishimatsu embodies the qualities a USC student-athlete should have.

Next to the stage was Cody, who showed the crowd his easy-going nature and sense of humor. Shaun announced that he had just graduated “in 14 years, I can check that off my list of accomplishments” and he also gave a shout-out to Kalibat as a fellow sociology major. Cody was referred to multiple times throughout the night as the “foundation” upon which the Pete Carroll era was built as he was the reigning national defensive player of the year when Carroll was hired, and Shaun said he went with a gut feeling that Carroll was going to put something together with the Trojans. He talked about being with fellow former Trojan Mike Williams who were part of an 0-16 Detroit Lions team, “it felt like we were in NFL Siberia”. Shaun lives locally with his wife and three daughters, and is part of the Trojan radio post-game radio broadcasts.

Tyson Helton was next, but not before there was a scary moment when one of the dinner guests, Bill Bedford, went to the floor while experiencing a health issue. Multiple doctors in the crowd rushed to his side, the paramedics were called and he was taken away to an ambulance while extending his right hand in the air with the victory sign.

For the record, Bedford checked out fine, which was great news.

Helton, who immediately captured the crowd with a speaking style that was similar to a southern preacher, addressed the situation in a way that quickly brought the energy back to the room.

“That’s the power of the Trojan Family! The man went down, the doctors were on him, pumping his chest, and he got up saying “Fight On” on his way out the door!”

Helton addressed several offensive topics. The Trojans will feature multiple personnel, multiple formations, they will use the tight ends, the great running backs and they will throw touchdowns. “I’m probably cutting my brother here but there’s no excuse for us not to be a good offense”.

He has no idea yet on a starting QB, “I need to see them on the practice field first”, but he did offer some thoughts on the candidates. Max Browne “talent, a hard worker, everything SC stands for”, Sam Darnold “powerful, talented, can run, isn’t scared”. Helton said “we’ve got an older guy ready for his turn and a younger guy waiting for his shot”. He also said Jalen Greene would be returning to QB for the spring to battle for the open spot. When discussing Matt Fink he said “can fly and can play multiple positions”.

Tyson accepted the USC coaching spot after his older brother Clay had gotten the job and called with the following offer, “I want you to come to SC but before you answer I want to remind you that I’m your older brother so you have five seconds to answer and it better be yes”.

Of the new coordinators, Tyson said “Tee and Clancy can lead you in the direction you want to go. Tee is powerful, he can capture the attention of the players”.

Helton said practices will be open, “Clay wants everyone to be a part of it”

The topic of the fullback spot came up and Tyson gave a thorough answer, “Right now we don’t have one but we have tight ends who can play hybrid roles, where they can live in the fullback’s world and give defenses fits. If we find a fullback who can do it, we will do it. We will eventually have a fullback again.”

On the USC run game, “We are going to do whatever it takes to win but part of that is you have to establish the run game”

On the OL under Neil Callaway, “I think Neil Callaway is the best offensive line coach in the business. When those 5 OL show up at the park they are going to be mad at the world and ready to hurt the men in front of them”.

The evening ended with a presentation on the Trojans 2016 signing class, including a viewing of the WeAreSC highlight reel.

Thanks to Kennally and the SGVTC board for another terrific evening.