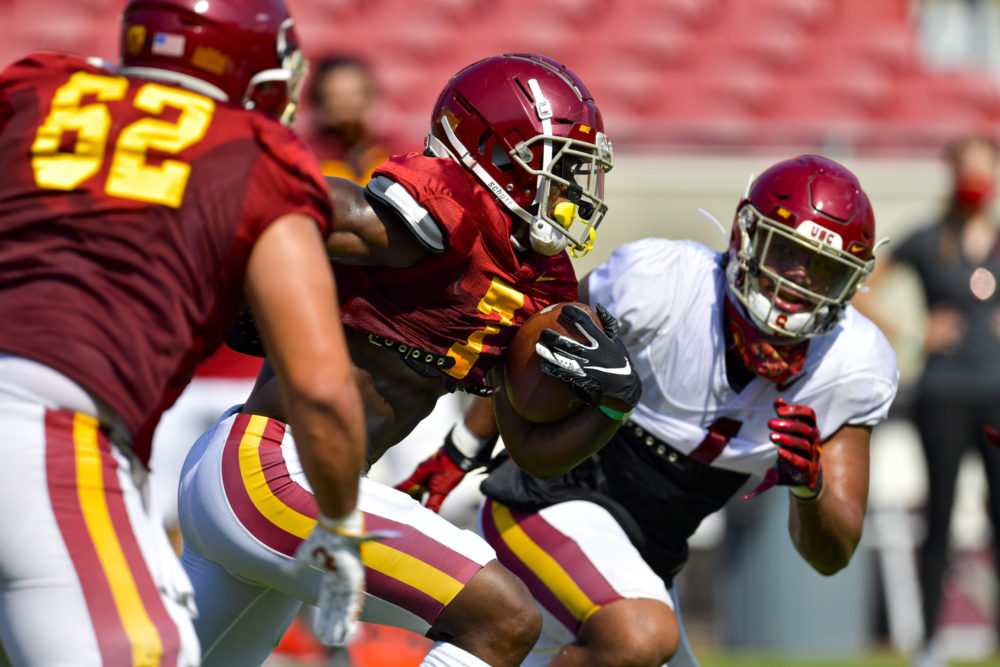 USC head coach Clay Helton spoke to the media on Monday morning, touching on a range of topics that included standouts from Saturday’s scrimmage, several injury updates, the progress of some young players and where the defensive improvement needs to come from between now and the start of the season.

“He did some things that you smile as a head coach, and I thought he had his best day of camp so far,” Helton said of his sophomore starter.

Helton also said that wide receiver Amon-Ra St. Brown, Bru McCoy, Drake London and Tyler Vaughns all made big plays down the field. He said it was the first opportunity to see McCoy in a live scrimmage situation and he delivered.

“He made a major step forward this past Saturday,” Helton said of McCoy, who missed all of last season while recovering from an illness.

Helton said true freshmen receivers Gary Bryant and Josh Jackson have looked good when healthy, and the group of those three, plus John Jackson III, will need to be able to step up this year behind the top three of St. Brown, Vaughns and London.

“You’ve got some depth there now that is going to allow us–if a guy needs air or a guy gets dinged up–that there’s no lack of production in my mind,” Helton said before turning attention specifically to McCoy. “I definitely see him contributing. Now, how much of a contribution will be up to him and how he continues to perform over the next two weeks.”

Helton singled out defensive tackle Marlon Tuipulotu for his performance throughout the scrimmage, and praised cornerback Olaijah Griffin for the energy he brought through the entire practice.

Running backs Stephen Carr and Kenan Christon have been front and center in the tailback rotation this fall, as Vavae Malepeai continues to recover from a hamstring injury and Markese Stepp is eased back from his ankle injury. Helton said Carr has been a star this fall.

“He’s had his best camp to date,” Helton said. “Last week, he really took a step forward. We challenged him, and I think competition brings the best out of all of us.”

Helton said Carr and Christon have been feeding off each other as the top two guys right now.

“We had a really physical day on Wednesday, which was a full-pad day, and I thought Stephen set the tone for the whole day with his physicality,” Helton said. “He’s had a wonderful camp thus far.”

Helton said Carr was outstanding again on Saturday, with the exception of one run where he didn’t get upfield as he had been doing throughout fall. Helton said he addressed it with him immediately and that he hopes he continues what he’s been doing because Helton told him, “You’re running it as good as I’ve ever seen you run.”

Helton said last week that the offense has been working with two-back sets and using tight ends more, either flexed out or attached to the line. He said they used both groupings plenty on Saturday.

“Being able to use the two-back, three-wides package, as well as the tight ends–whether they’re attached or flexed–[offensive coordinator Graham Harrell] takes five great athletes and he spreads the defense with them in different formations,” Helton said. “Both of those personnel groupings were practiced a lot in this setting on Saturday and something I see us continuing doing.”

When four receivers make plays down the field, it’s obviously a positive for the offense–and won’t be the last time these guys make those kinds of plays this season. But Helton said it also can give some pause on the other side of the ball, and these cornerbacks–plus position coach Donte Williams–will look to address that issue.

At this point, Helton said the biggest focus on defense over the next few weeks is going to be simply winning more one-on-one battles.

“I was really pleased with the schematics of the day, the communication,” Helton said of the defense. “You didn’t see guys running wide open. You didn’t see huge gaps…Where we do have to grow is winning the one-on-one battles, in my opinion.”

Helton is looking forward to watching the one-on-one battles between the talented wide receivers and the experienced cornerbacks. He said the group lost some battles down the field, and for a position group and coach that expects perfection from the moment they step on the field until the final whistle, that’s going to motivate them.

“That would probably be the biggest thing going into this week, which will be basically their toughest week of camp–the next six days,” Helton said. “Hopefully we see that improvement from this first full week that we’ve had, to this week coming into this next Saturday.”

“In this system, if you have shutdown corners and can be able to rush four, it’s going to be a mighty good day for your defense,” Helton said. “I’ve watched them physically get better as technicians as well as leaders. I think Donte is doing an amazing job with that crew, just transforming their personalities, their mindset, as well as their technique and fundamentals. They’re not a finished product yet by any means, but gosh they’ve made advances i the time they’re been working with Donte.

“We need them to play big, especially in this defense,” Helton said. “It calls for shutdown corners, and thank goodness we have those three guys here because that’s what I think they are.”

Linebacker Kana’i Mauga is in a battle for the starting middle linebacker job, but he continues to be slowed with a hamstring issue. Helton said he’s beginning on run on it. The team will take things slowly with Mauga, but Helton anticipates him being ready for the season-opener against Arizona State.

Linebacker Juliano Falaniko suffered an ankle sprain this past Thursday. Helton said it won’t require surgery, but will keep him out for several weeks.

Cornerback Dorian Hewett is expected back possibly today. He has been held out since this past Thursday. Helton said he experienced a back sprain while going to the ground during practice on Wednesday.

Jayden Williams also suffered a back injury during that Wednesday practice. Helton said he could return as early as today or tomorrow.

Helton said there were no new injuries sustained during the scrimmage practice on Saturday.

He said he’s been impressed with the physical progress Pepe has made since returning to campus over the summer.

“As we went through the Covid virus and being away, Kobe had put on some weight and needed to shed a couple pounds and get back in shape, and he has,” Helton said. “Since coming back with us in July, he’s had a great sense of urgency to get his body back where he’s not just a two-to-three play guy. He can go six to eight to ten plays in a drive.”

Helton praised Marlon Tuipulotu for taking Pepe under his wing in the middle of the defensive line this fall. Tuipulotu also received praise from Helton for the help he’s given his young brother, Tuli Tuipulotu.

“Tuli has been awesome,” Helton said. “I mean from Day 1, to be honest with you. And I can see him contributing this year. He has been an extremely mature kid and is growing by the day.”

Helton praised his athleticism and his pass rushing skills, and marveled about how he’s developed physically since arriving at USC.

“I remember when he was 240 pounds and now he’s 275 and looks like a monster,” Helton said. “And he’s 275 but he runs like he’s 240…He has a really bright future and is somebody that I think is having a great camp–one of the better camps of anybody on our team.”

One of the things Helton specifically said the team will need to address moving forward was a few holding calls that stopped drives. Helton also gave extended praise to the performance of the defensive line–which, in a zero-sum situation like a scrimmage–means that praise comes at the expense of the offensive line. But Helton also said he was impressed with the veteran linemen working with the first team right now.

“There’s a definite level of experience that you can see with those older kids,” Helton said. “They’ve been in the battles…They walked into that stadium like pros.”

Helton is referring to Alijah Vera-Tucker, Andrew Vorhees, Brett Neilon, Liam Jimmons and Jalen McKenzie as those older guys. But he also said Justin Dedich and Liam Douglass have stood out. Helton said he felt Dedich had a good Saturday practice and will help the Trojans at center or guard this season. He also believes Douglass could see some time this season.

Helton also spoke about the true freshmen offensive linemen again. There’s clearly a pecking order developing, as Jonah Monheim and Courtland Ford are consistently listed as the top two freshmen most likely to play this season. Casey Collier is also seeing time at tackle and seems to be right behind them.

Ultimately, their progression this season could not only help the Trojans immediately, but is also a key for the next few years.

“The six guys we signed last year are going to be the future of this place,” Helton said. “And probably, this time period–from July to now–has probably benefitted those six kids the most.”

With none of them coming in as early enrollees and getting a head start, Helton said if the season had progressed as normal, it likely would have been impossible for any of them to realistically make an impact this season. As it is now, however, they’ve gotten so much extra time to prepare, there’s little doubt in Helton’s mind that a few could be called on.

“I think because of this extended time that we’re being given, I don’t think there’s going to be a fear if we have to put one or two or more in a game,” Helton said.