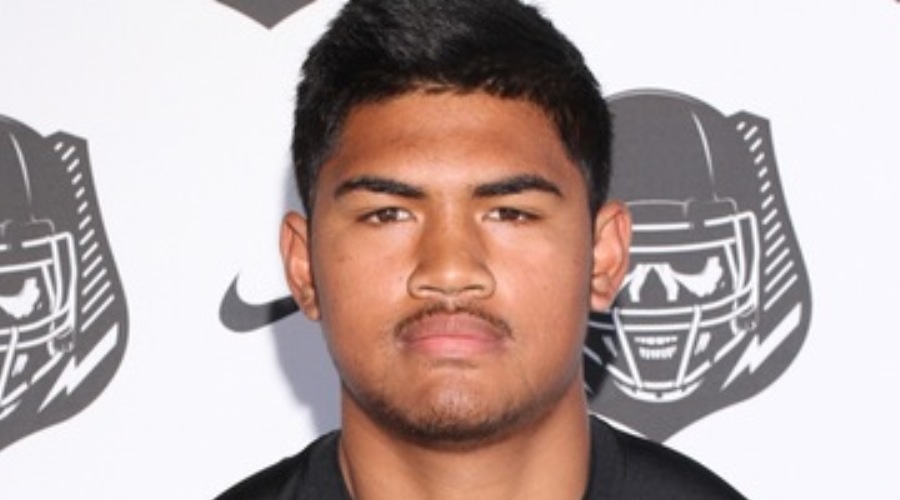 USC verbal commit and La Mirada (Calif.) defensive end Keanu Saleapaga was on display in the Matadores 35-14 rout over the Charter Oak Chargers on Friday night in Covina. The 6-foot-6, 265-pound Saleapaga made his presence known on the first play of the game, sniffing out a run play in the backfield for a two yard loss, but only recorded one tackle for the remainder of the game.

While Saleapaga showed disruptive flashes coming off the edge that resulted in a couple of quarterback hurries, it was an underwhelming performance overall. Saleapaga is a still a raw prospect with a long frame that can eventually carry upwards of 300 pounds, potentially prompting a move inside to defensive tackle.

-Scheme versatile athlete who can play from the 5-technique or 3-technique position.

-Physical defender with adequate sideline-to-sideline range, but needs to improve his ability to redirect and pursue without jeopardizing gap responsibility.

-Possesses a long, sturdy frame that is capable of adding the bulk necessary to play defensive tackle.

-Displays streaks of explosive play off the line, but lacks consistency and often gets stuck on blocks.

-Purely a bull rusher who needs to develop an arsenal of pass rushing moves to counter with when his initial move is stymied.

-Gets slowed by contact too frequently when rushing off the edge, struggling to regain full speed.

-Needs to develop his hand use technique in order to shed blocks.

-Excels as a run defender who can set the edge, establish leverage in the C gap and disrupt inside runs.

-Plays with a low pad level and uses his long arms to corral ball carriers.

-Physical defender who can hold the point of attack and anchor consistently with his stout frame.

Saleapaga boasts an impressive physique, translatable skill set and is capable of contributing as a 3-technique or 5-technique defender with the proper coaching at the next level.