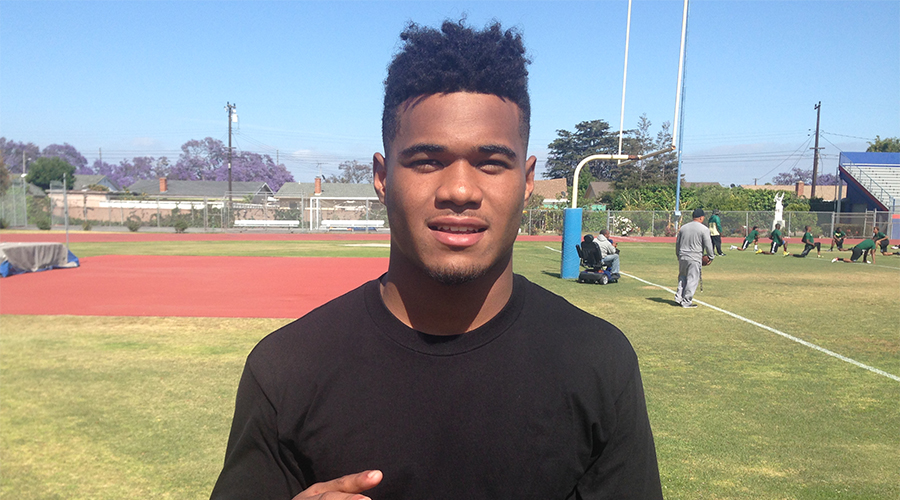 Coming off a stellar sophomore campaign on the field for CIF-State champion Harbor City (Calif.) Narbonne, USC linebacker commit Raymond Scott was back leading the Gauchos defense on Wednesday as they squared off with Long Beach Poly and host Gardena Serra in a three-team 7-on-7 competition.

With Trojans linebackers coach Johnny Nansen and wide receivers coach Tee Martin among a throng of college assistants in attendance, the 6-foot-2, 220-pound defensive standout certainly didn’t disappoint as he showed off the outstanding speed, instincts, and aggressive brand of play that has helped solidify his standing as one of the top prospects in the Class of 2018.

There is, however, one noticeable change that has taken place for Scott this offseason – the position that he’s lining up at. Having racked up 140 tackles, 28 tackles-for-loss and six sacks this past season at middle linebacker, he’s made the move to an outside linebacker position that now has him frequently dropping back into coverage in a rover-type role, and he looks more than at home.

Obviously extremely versatile, Scott could line up at just about any linebacker spot on the next level, but in talking to the USC coaches, he believes that they want him to play on the outside – likely at the SAM spot where he believes he can fill a function similar to a certain three-year Trojans starter who was just drafted by the Washington Redskins.

“Su’a Cravens, I saw him when he was at outside linebacker, and he was very shifty,” Scott said. “I see myself doing the same kind of things at that position.”

Scott was offered by the Trojans coaching staff immediately following this past Signing Day, and after mulling the decision over with his family, he decided to commit in early April.

“I’ve always been a Trojan fan since I was little,” said Scott, who also held offers from Boston College, Oregon State, Syracuse and Washington State when he gave his pledge. “Now that I’m in the Trojan Family, it just seems right. And you know, in the classroom and out of the classroom, I see myself fitting in at USC – like it was the school that I needed to go to.”

Another factor that led to Scott’s decision was his relationship with the USC coaches, most notably Nansen.

“I talk mostly to Coach Nansen, and we have a great relationship,” Scott said. “I talk to him whenever I’m up there, and I keep in contact with those guys probably once a week, just to help me build my relationship with them, and to get used to everything up there.”

Since receiving his initial offer from the Trojans, Scott has been a frequent visitor to the USC campus, taking in a number of spring practice sessions this past March and April.

“Ever since I was little I just dreamed of going to SC, and just stepping on that campus is always a great feeling,” Scott said. “When I was at practice I just saw big, motivated dudes. That’s where I’m trying to get.”

With almost two years to go before he can sign a National Letter of Intent, however, Scott is still being heavily pursued by a number of other top-flight programs, and he isn’t ready to completely shut down the process just yet.

“I’m 95 percent solid with USC right now,” said Scott, whose most recent offer came from Michigan, “but I’m still going to take my trips, show respect to the other schools and check them out.”

Having dreamed of playing for the Trojans for so long, however, it certainly appears as though something drastic would have to happen for Scott to head elsewhere. In fact, he’s already started to build a bond with the other USC commits in his class — the Oaks Christian duo of  quarterback Matt Corral and outside linebacker Bo Calvert.

“I talk to them over Twitter and I’ve gotten to know them,” Scott said. “We really keep in contact, and we’re ready to go up to SC and play together.”

In another positive sign for USC head coach Clay Helton and Co., Scott has also started to get in the ear of some other recruits, including Serra linebacker Merlin Robertson on Wednesday.

As for his schedule for the rest of the offseason, Scott doesn’t have any set plans at this point – except for one.

“I’m pretty sure I’ll be stopping by USC throughout the summer.”