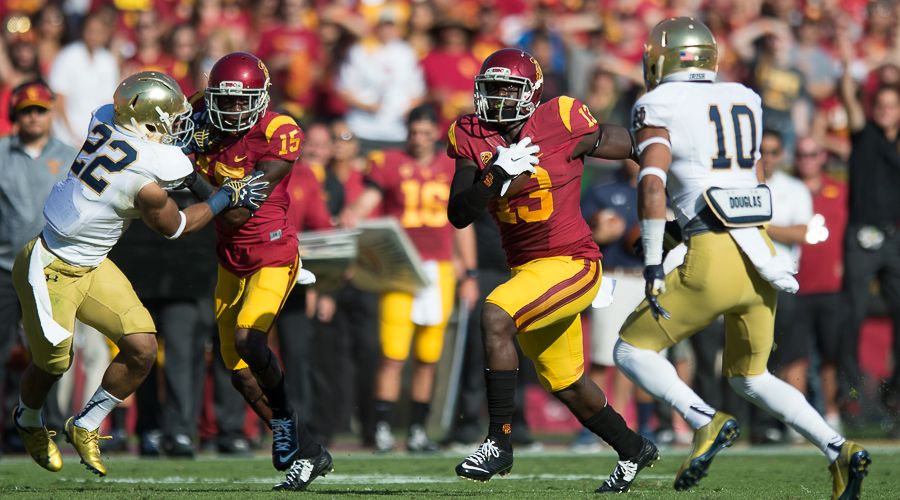 With the Trojans exactly one week away from their Holiday Bowl clash with Nebraska, Steve Sarkisian’s squad hit Brian Kennedy-Howard Jones Field on Saturday for a light practice in shorts and helmets that mimicked what the team would normally do on a Thursday during the regular season.

Having been able to install the game plan this week, the USC head coach said that he is pleased with where his team is currently at, and noted that he believes they would be ready to play right now if they had to.

“I feel great about what we’re doing,” Sarkisian said. “I think the guys have a really good understanding of what we’re trying to get done, and that’s the point of putting it all in this week, so that next week we find the right balance of game-planning and practicing, but also enjoying the time together as a team [and] enjoying the bowl festivities, so that it’s not just all about football. We have a chance now to go back and just kind of fine tune it next week, enjoy our time, enjoy Christmas together and then go play a really good game.”

The Trojans now have the next two days off, before returning to practice on campus on Tuesday morning, and departing for San Diego later that day.

USC freshman wide receiver JuJu Smith, the Trojans’ No. 2 pass-catcher and a Pac-12 second-team all-purpose/special teams selection, made a surprise revelation this past Thursday when he intimated that he will also take reps on defense in 2015.

In addition to being a top-flight wideout during his high school career at Long Beach (Calif.) Poly, Smith was also a standout safety.

Sarkisian was asked about Smith’s comments on Saturday, and while he certainly didn’t confirm that Smith could play both ways next season, he also didn’t completely shut the door.

“We haven’t talked about it, but that’s, I think, just JuJu being the ambitious person that he is,” Sarkisian said. “He wants to, I know that. But I know he’s not going to play [there] next Saturday against Nebraska. I need him to catch a couple touchdowns, so we’ll focus on that when we get into the offseason, [when] we assess our roster and assess our strengths, and that will be a topic of discussion.”

“There’s a lot of nuances to defense,” Sarkisian said. “There’s different calls, there’s checks that can be made based on formations and what not, so that’s the hard part. If we’re going to do it, we have to teach him the overall scheme. On offense you come over for three, four or five plays, or one or two plays.”

If there is anyone who might be capable of handling the challenge, however, it’s Smith, who has drawn continual praise from Sarkisian not only for his play, but also for his maturity and leadership qualities.

“I will say this about JuJu, he’s got a very high football IQ [and] he loves the game,” Sarkisian said. “It shows. He starts on every special teams for us and he does a great job. Obviously, the conference recognized him as a second-teamer special teams player. He’s got a high football IQ [and] he’s very physical. I don’t think you would have any issue doing it, it’s just a matter of – is that in the best interest for us? So, that remains to be seen.”

When asked if there was anything in particular that Sarkisian wants to see his team do better in the bowl game than they did during the regular season, he provided a quick answer – “Finish the game.”

“That’s something that’s been obviously easy to see when you watch us play,” Sarkisian said. “So, that’s a big point, and we know this is going to be a four-quarter game. We’re going to have to finish in the fourth quarter late in this game, and we’re going to have to execute and remain aggressive.”

Sarkisian likes what he sees in Whitney

USC scored a big get this past Thursday when Riverside (Calif.) City College wide receiver Isaac Whitney committed to, and signed with the Trojans. Set to arrive at USC this January, the talented pass-catcher will bring not only unique 6-foot-4 size to Tee Martin’s position group, but as Sarkisian noted on Saturday, also surprising athleticism.

“I like Isaac on a couple fronts,” Sarkisian said. “One, I think he provides something a little bit different than what we have. He’s a bigger receiver, but for a big receiver he shows a lot of, I’d say, little-guy qualities. He’s very quick in and out of his breaks [and] he’s extremely athletic, so I think he’s going to be a great fit in our system.”

Whitney caught 49 passes for 809 yards and four touchdowns this past season.

– The Trojans spent a large chunk of practice on Saturday in service team and teaching periods. There were no live 7-on-7 or 11-on-11 periods featuring the No. 1 offense vs. the No. 1 defense.

– Wide receiver Ajene Harris (hamstring) did not participate in practice.

– Linebacker Uchenna Nwosu still seemed hampered by his ankle injury, but he participated in individual drills and even took some reps during a late 11-on-11 period against the scout team.

– On offense, Cody Kessler, Nelson Agholor, Bryce Dixon and JuJu Smith all had big days while going up against the scout team defense. On the other side of the ball, defensive lineman Leonard Williams came up with the play of the day – an athletic interception at the line of scrimmage on a pass thrown by Jalen Greene.

– Sarkisian again praised Nebraska’s Ameer Abdullah, calling him the best running back that USC will have faced this season. He pointed out Abdullah’s versatility and compared him to Arizona State running back D.J. Foster.