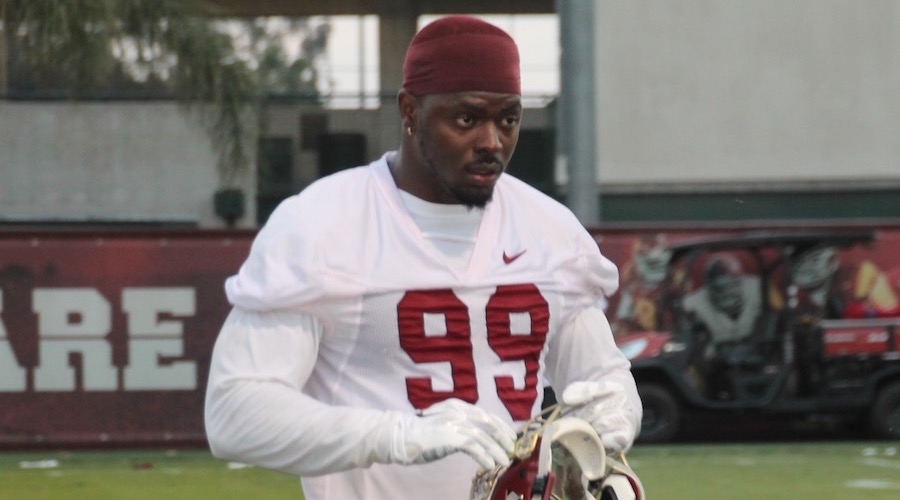 During the bye week we saw a lot of younger players get extended reps to see if they ready for an increased role, give one of those players on offense and defense who could be a surprise contributor during the final stretch of the season.

I’ll go with Dominic Davis on offense. We got a glimpse during the Arizona game of what Dominic can do with the ball in his hands and you could tell that Helton was impressed by what he saw. It wouldn’t surprise me at all if the coaches look to find ways in the crowded backfield to get Davis a few touches to see what kind of explosive plays he could provide, and that might include catching the ball out of the backfield or from the slot.

For defense I will go with Oluwole Betiku. His redshirt year was burned for a reason and you have to imagine he will be turned loose more and more to get after opposing quarterbacks. He’s not a polished product yet but the sheer motor is there to apply pressure in specific situations, and it’s not a stretch at all to think at some point Wole (photo above) is going to come up with a critical sack that helps the Trojans during this final month of the season.

I’ll go with Jalen Greene on the offensive side of the ball. With Steven Mitchell sidelined for the remainder of the season, Deontay Burnett is being hailed as the next man up, and for good reason, but Greene is another player whom I think stands to see an increase in playing time. A fantastic athlete, he’s looked surprisingly at home at wide receiver ever since he made the switch from quarterback. He only has three receptions up to this point this fall, but from what he’s shown in practice on a fairly routine basis, he definitely has the skill set to succeed at the position, and with more opportunities set to come his way, I think he has the potential to emerge as a real contributor.

On defense, freshman outside linebacker Oluwole Betiku is someone who I think could potentially take on a larger role as the season progresses. Arriving at USC with lights-out physical talent, but raw in terms of his technique, Betiku was originally slated to redshirt. Having flashed in practice over the last month, however, the coaches decided to scratch those plans, and he’s played in each of the Trojans’ past two victories. Lining up at the predator spot, he won’t be challenging Porter Gustin for the starting role right now, but I think he is a guy who can come in to spell Gustin periodically. A strong pass-rusher, he’s also someone we might see utilized in third-down situations now and again.

I would say that of the younger players I think could surprise in the games of the season true freshman wide receiver Michael Pittman comes to mind. While Pittman has seen some spot duty this season, his number may be increasing called to action due to the loss of fellow receiver Steven Mitchell Jr., who is out with an ACL. Stardom has been predicted for Pittman since the day he arrived on campus, and he has shown flashes of that heralded talent. Like most freshman, he’s had to make adjustments not just physically, but in handling the expectations of discipline when he’s been in the game either as a receiver or a member of the special teams. The big picture is that this kid can be somebody that could contribute in the remaining five games if needed.

Defensively, it’s no surprise that the name of true freshman corner Jack Jones comes to mind. He has flashed in practice and certainly isn’t lacking for confidence. After all, he already has proclaimed himself a Heisman Trophy candidate. Well, that may be true in the future, and it’s getting to the point where he might see even more playing time in the final five games. If, as expected, Adoree’ Jackson heads to the NFL after this season, Jackson’s logical replacement would appear to be the talented Jones. It will be intriguing to watch how defensive coordinator Clancy Pendergast works Jones into increased playing time in his system with the time remaining.

Offense – TE Daniel Imatorbhebhe was my pick to be the surprise contributor on offense at the beginning of the season. So I’m sticking with the transfer from Florida to get more targets from QB Sam Darnold in the second half. Daniel has started to emerge by catching two touchdowns in the last two contests against Colorado and Arizona. And defenses focus on the perimeter receivers, I think Imatorbhebhe will have the opportunity to increase his production.

Defense – CB Jonathan Lockett has been the number three CB in the Trojan defense for much of this season, and has played well.  I think he continues to emerge in the second half as USC takes on pass-happy teams such as CAL and UCLA. Jonathan may have had his best game against Colorado, when he had 5 tackles, a pass break-up and was a general nuisance to the Buffalo passing attack.