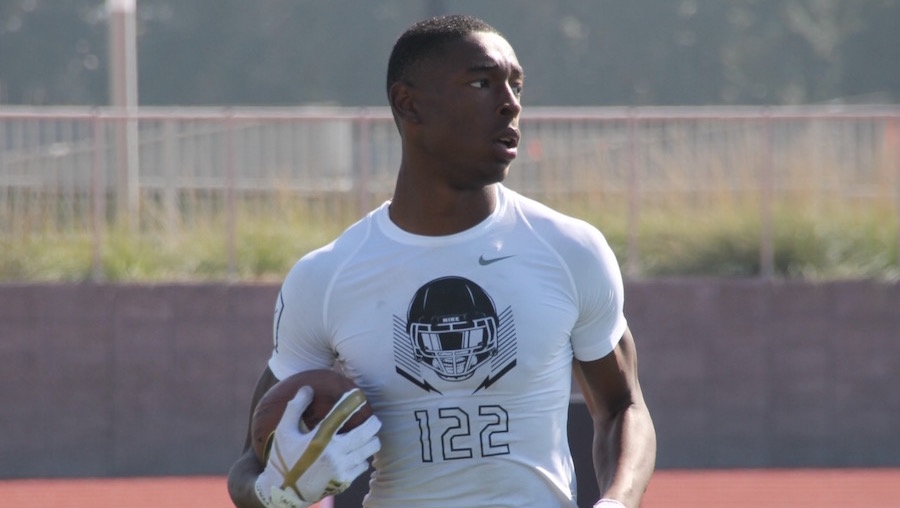 WeAreSC staffers review some of the top USC recruits who took part in The Opening regional at El Camino College.

Garry Paskwietz: I thought Amon-Ra St. Brown stood out, and that says something with the linebackers who were there. One of the things that really separates Amon-Ra is his strength, he’s been trained well and knows how to use that element of his game. He didn’t run a particularly fast 40 time but that didn’t prevent him from dominating the on-field 1-on-1’s.

Johnny Curren: Palaie Gaoteote and Amon-Ra St. Brown. The linebacker group at the event was absolutely loaded with talent, but to me Gaoteote just stood out. The USC commit has everything you’d want in a linebacker – size, speed, a physical brand of play and excellent instincts. St. Brown, meanwhile, was flat-out dominating at this camp, catching everything that came his way, while also showcasing his explosiveness.

Greg Katz: From my on-field vantage point, the best player in the camp – of which there were many great prospects – was Santa Ana Mater Dei wide receiver Amon-Ra St. Brown. Not only is he a physical specimen (although not necessarily tall -probably under 6-foot) he is quick-on-quick. St. Brown made some moves and breaks out of his cuts that broke a few ankles for sure. And no doubt, he loves to compete and loves the competition. In the great and talented St. Brown football family, the Trojans have not had much luck in recruiting. However, Amon-Ra could be the best of the bunch, and this kid is a threat every time he catches the ball. Here’s hoping that Tee Martin can work his magic and get the St. Brown family thinking cardinal and gold.

HelixTrojan: On offense, the player who stood out to me the most was wide receiver Amon-Ra St. Brown (Mater Dei). He was clearly the best route runner of a very talented group. And his physical maturity and ability to catch the ball stood out as well. On defense, linebacker Palaie Goateote (Bishop Gorman, Nevada) was as good as advertised in the individual drills. He’s a compact, explosive player in space who showed comfort dropping back into coverage in the 7 on 7 period.

Name a sleeper player, or someone who was better than you expected

GP: I’m going to go with Jack Lamb here. I was originally going to go with Devon Williams because he impressed me again this spring but with the group of linebackers who were in attendance it says a lot about Lamb’s performance that he was one of the players chosen for the Opening finals.

JC: Devon Williams. Having just received an offer from USC a couple weeks back, Williams (photo above) is somewhat of a newer name in recruiting circles whose stock has soared this offseason, and I was extremely impressed by what I saw from him. For a player who possesses legitimate 6-foot-4 size, he’s a surprisingly fluid looking athlete who made some nice grabs on Sunday.

GK: I would have say to that a sleeper player for me was Colony High wide receiver Michael Ezeike, who looks like a future tight end. Right now Michael is a very tall and well-built receiver. He has some offers, but I think he’s somebody that needs further recruiting scrutiny. Another player that wowed me was Antelope Valley wide receiver Devon Williams who reminded me of a former Trojans recruit, Alshon Jeffery. Devon is big, he can move, and he can catch. Take away St. Brown, and I think you could make an argument he was as good a receiver as there was in the camp.

HT: Wide receiver Devon Williams (Antelope Valley) was a player who I had not heard much about. But he was really good at this regional opening and showed why he has offers from programs such as USC, Alabama, Notre Dame, and Florida St. to name a few. At 6’4, Williams really knows how to use his size and arm length to make plays.

The linebacker group was special, give your thoughts on what you saw from them

GP: The linebackers were expected to be a special group and they delivered. I thought it spoke volumes that USC Butkus Award winner Chris Claiborne, who was coaching the linebackers, said that after watching Palaie Gaoteote in action he called the USC coaches and endorsed him wearing #55.

JC: Watching this group go through their drills was the highlight of the camp for me. As I already mentioned, Gaoteote really is the total package. Fellow USC pledge Raymond Scott actually came away with MVP honors, and I can see why. He was flying through the drills, and he was unstoppable in the one-on-ones. While he didn’t come away with an Opening invite, I thought fellow USC pledge Bo Calvert showed well too. In fact, I thought he was the best of the bunch in coverage. Trojans targets Solomon Tuliaupupu and Merlin Robertson were outstanding as well. Both are big, strong linebackers who move well.

GK: No question, they all nearly lived up to their top billing. The impressive thing to me is how deep this upcoming group is and that the Trojans can’t have of them, can they? It was great seeing Las Vegas Bishop Gorman’s heralded Palaie Gaoteote in person. Because of film, I figured he might be an outside linebacker. Although I think he could make a very good outside backer, I think he can be a great inside linebacker. I was also impressed with Mater Dei’s Solomon Tuliaupupu, and it appeared to be that he could rival Gaoteote in terms of being physical. One linebacker that seemed to really prove that he is among the elite was Gardena Serra’s Merlin Robertson. No doubt, Merlin came to El Camino CC with something to prove and he did. And, no, I didn’t forget Harbor City Narbonne’s Raymond Scott, another player that is all man and did nothing to hurt his blue chip status.

HT: I was just really impressed by the physical frames that linebacker prospects such as Palaie Goateote, Bo Calvert (Oaks Christian), Solomon Tuliaupupu (Claremont), Ray Scott (Narbonne) , and Merlin Robertson (Serra) possess. And they move so well for guys over 220lbs. This linebacker group was also deep with some other prospects like Isaiah Johnson (Los Alamitos) , Noah Sewell (Desert Hills, Utah), Eli’Jah Winston (Central Catholic, Oregon), and even 2020 prospect Justin Houston (Serra) – little brother of current SC linebacker John Houston who was in attendance to observe.

GP: Isaac Taylor-Stuart had a couple numbers that stood out to me. He was measured at 6-2, 185 and tied for the fastest 40 time at 4.43, you don’t see that combination of size and speed too often in a high school junior cornerback. He didn’t make the Opening finals but I saw everything I needed to see from Isaac to continue to have him high on my wish list.

JC: Class of 2019 cornerback target Max Williams really impressed me. With excellent natural cover skills, he was a real force in the one-on-ones. Will the Gardena (Calif.) Serra star eventually follow in Adoree’ Jackson’s footsteps to USC? From what I saw, if you’re a Trojans fan, you should hope so.

GK: At the beginning, I wasn’t all that impressed with L.A. Hawkins’ tall wide receiver Jalen Hall. He didn’t appear to have blazing speed, and his route running was not overly impressive. I questioned whether he was into it mentally or even had “a motor” like some of the other performers.  However, later in the afternoon he proved to me why all the commotion. He catches everything thrown his way and is so tall and athletic, he is a corner’s nightmare to cover and to tackle. You can triple cover him, and he still high-points the ball like a pro. I will be interested to watch how he performs in future national competition.

HT: There were a couple of players I thought had very good performances. QB JT Daniels (Mater Dei) threw some beautiful passes in the one on one drills. DB Isaac Taylor-Stuart (St. Augustine, San Diego) is a legitimate 6’2 cover cornerback who had a good day. TE/WR Michael Ezeike (Colony, Ontario) was a difficult match-up in the individual and 7 on 7 drills. At 6’5, Ezeike looked bigger than the 210lbs he’s listed.