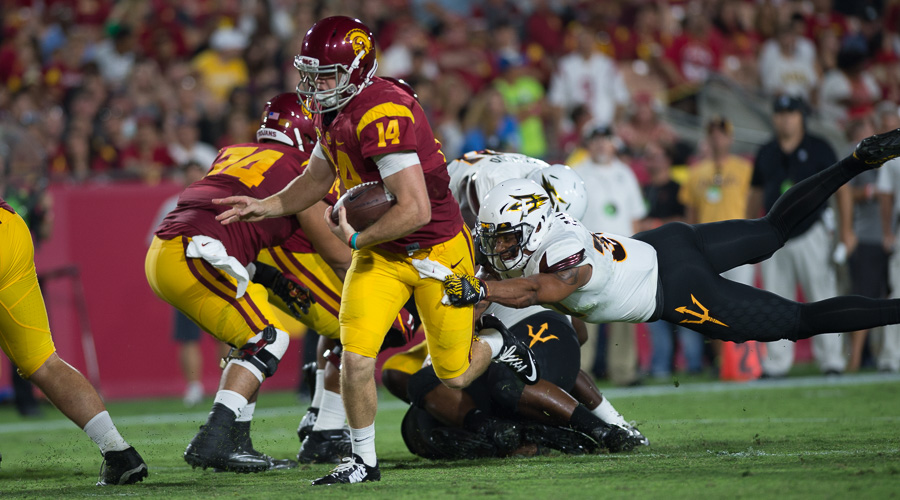 Give 3 things that stand out from the first 6 games

* The impact of Sam Darnold: There is certainly more at play in the Trojans recent resurgence than just the quarterback switch but I think that move is at the top of the list for what has turned things around in terms of energy, execution and improved play. There’s just a difference in the way the team is playing with Darnold in charge and so much of it comes from his gunslinger mentality, ability to keep attacking even after facing adversity, and his sheer penchant for making plays.

* Pressure from the defense: Early in the season one of the biggest question marks was the lack of pressure from the defense on opposing quarterbacks. Getting pressure has been a hallmark of Clancy Pendergast defenses and it was noticeable that the Trojans weren’t getting much of a push from their defensive front. In the last two weeks, however, that has not been a problem as the defense has done a good job of flustering two quarterbacks that had previously been producing at a high level.

* Special teams across the board: When John Baxter was hired back to the Trojans to run special teams it was expected that there would be instant results, and we’ve seen that through the first half of the season. Matt Boermeester has blossomed into one of the more dependable kickers in recent USC memory, Chris Tilbey has become effective placing punts so that there is minimal return yardage, and Adoree’ Jackson is simply one of the most dangerous return men in the country (leading the nation in punt returns and 8th in kickoff returns).

* Sam Darnold. Fumbles aside, the performance of the redshirt-freshman passer over the past three weeks has been nothing short of spectacular. He’s breathed new life into a struggling offense not only with his strong arm and scrambling ability, but most importantly, his unique playmaking skills. He’s one of those true ‘gamers’ who only comes around once every so often.

* Offensive line still not where it needs to be. Heading into the 2016 campaign Neil Callaway’s group received plenty of pre-season hype, but they just haven’t lived up to those expectations by any stretch of the imagination. The good news is that they have shown improvement as of late, especially against Colorado when they didn’t commit a single penalty. It will be interesting to see if they can continue to come together in the coming weeks, particularly with Zach Banner likely to return this week.

* Attacking defense starting to take shape. After a slow start, Clancy Pendergast’s defensive system is starting to resemble the same one that everyone saw during his stint with the Trojans in 2013. Over the course of the last two weeks, in particular, we’ve seen a much more aggressive unit that has done a solid job of getting after the quarterback. With the interior defensive line also showing improvement in that same time period, the hope for the group as whole is that the best is yet to come.

* I think we’d all agree how much the effectiveness of the Trojans offense has increased since redshirt freshman Sam Darnold became the quarterback. In a sense, this is unfair to original starter Max Browne, who had the unenviable task of opening with Alabama and two games later had to play at ranked Stanford. As for Darnold, he has energized not only the offense and the defense, but the Trojans fan base, as well. Darnold’s ability, gamesmanship, creativity, and effort have given the Trojans a chance with all their remaining games on the schedule. Although still a rookie making first-year miscues like fumbles and interceptions, Darnold’s future is as bright as the positive numbers he puts on the scoreboard. We may be looking at a future All-American when it’s all said and done.

* To me, there was the shock and disappointment that in the early stages of the season this team seemed to be lacking not only a killer instinct but appeared to lose their will to compete against the likes of ranked elite teams like No. 1 Alabama and Stanford. Where was that “fight on” spirit? However, this team seems to have snapped out of it or simply grown each game. However, it would be wise to monitor their aggressiveness and will to win when the Trojans play against the likes of Washington in Seattle come November 12. That game will be a late measuring stick on progress from Alabama to the present.

* I was surprised or should I say curious with some of the coaching decisions as it pertained to fourth down options to punt for “go for it.” And then there was the questionable management of timeouts throughout the course of the first six games and, of course, the large amount of penalties early on. The good news, however, is that in other areas there seems to be positive changes such as redoing some of the offense to fit the skills of Sam Darnold, and the sudden increased movement of blitzes on defense, which were apparent last Saturday against Colorado. I take these coaching adjustments as positives, as the new staff continues to learn about each other, and the players gain trust in the staff. Call it all a slow work in progress, but I do believe things are pointing in a positive direction.

* The Player – RB Justin Davis has emerged as one of the best running backs in the Pac 12. Over the last three games, he has rushed for 341 yards on 37 carries, averaging about 9 yards per carry. From making sharp cuts, to reading the blocking, to breaking tackles and moving the pile . . . Davis is doing it all.

* The Play – CB Adoree Jackson’s interception versus the Colorado will go down as one of the great individual athletic plays in USC recent history. Equivalent to the one-hand catch by WR Mike Williams against Oregon State or RB Reggie Bush’s flying somersault touchdown versus UCLA, Jackson’s mid-air splits to haul in a key interception will be one of college football’s best plays in 2016.

* The Scheme – When QB Sam Darnold was elevated to starter, the main thing I was watching was whether or not the offensive scheme would change to incorporate his skill set as a capable passer and runner. OC Tee Martin has done so. Darnold has run for two touchdowns and close to 90 yards in his three starts, not to mention garnering the second best passer rating in the Pac 12.

GP: I’m going to go with the offensive line. I think things have steadily gotten better with the line in recent weeks as they have adjusted to the loss of Toa Lobendahn at center and the absence of Zach Banner the last two games due to an ankle injury. Give a big hand to Chad Wheeler for the way he has moved past a plantar fasciitis injury to become a leader at left tackle with his play, and also to a guy like Jordan Simmons who has stepped in to give valuable reps at right tackle (along with Chuma Edoga) with Banner out of the line-up. If the line can continue to gel they could have a huge impact for the offense in the final stretch of the season.

JC: The re-emergence of Ronald Jones II. He hasn’t performed up to the standard that he set as a big-play freshman, but with Justin Davis now sidelined with a high ankle sprain, Jones will undoubtedly get more reps, and I think it’s going to allow him to get back into the flow of things, and ultimately, to break out.

GK: Although this may not come as much of a surprise, but somebody that could have a big impact on the remaining six games is junior placekicker Matt Boermeester. He has proven that he can make field goal connections from short and long distances with regularity. Matt has done it in big games like Alabama and in big conference games like Arizona State. He continues to be a major factor in kickoffs, booming them into the end zone for touchbacks. He has become a major special teams weapon, and this could be a huge factor if the Trojans are going to remain in contention for the Pac-12 South Division title.

HT: Surprise, Surprise, Surprise . . . as Gomer Pyle used to say . . . guess who is still in the race for the Pac 12 South championship – the USC Trojans. After a rocky start, SC finds itself with an opportunity in the second half of the season to accomplish its original goal with steady improvement against a schedule that is winnable. The Trojans, however, will have to cut down on the turnovers and keep the penalties low to give themselves a chance.