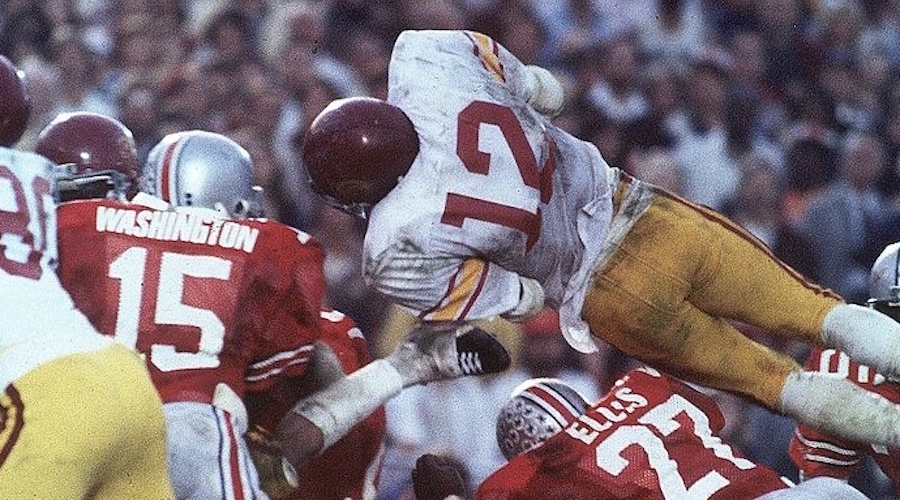 Give your most memorable USC Rose Bowl game or moment

January 1, 1980. USC vs Ohio State. A friend of mine from junior high had a father who was on the faculty at USC and wasn’t using his Rose Bowl tickets so he passed them along to me. I had been to a couple Trojan games already but nothing could prepare me for what would happen that day in terms of establishing a foundation for being a USC fan. Like most everyone else reading this, I can vividly recall walking into the stadium and seeing the colors for the first time, it just looked alive with the green of the grass, the traditional uniforms of both teams and, of course, the picture perfect postcard day with the San Gabriel mountains in the background. I can’t tell you much about the actual game beyond the final drive, but not much needs to be told. It was a whole lot of Charles White with the game on the line, #12 carrying the ball time after time until he finally dove over the goal line (photo above) for the game-winning score. Isn’t that how it was supposed to be? A USC tailback always made the play at the end, right? That’s the way it was ingrained in my mind at least. I left the stadium that day with a new hero in White, a new destination for me to go to college, and a game that will always hold a special memory for this Trojan fan.

It certainly isn’t my fondest memory, but when I think of the Rose Bowl, at least in recent years, I still immediately go back to a play that broke the heart of every Trojan fan – Texas quarterback Vince Young’s game-winning touchdown run in the 2006 Rose Bowl, which also doubled as the BCS National Championship Game. USC came into the contest rolling at 12-0, with a roster stacked with stars like Reggie Bush, Matt Leinart, and LenDale White. With the way that they had compiled win after win, including the famous “bush push” victory over Notre Dame, it really seemed like that year’s Trojans team was destined to come away with the national title. But Texas came into the Rose Bowl sitting at 12-0 as well, and they had Young, who wound up being too much for the Trojans defense to handle. That was especially the case late in the fourth quarter, with USC leading 38-33, and the Texas offense facing a crucial 4th-and-5 situation at the Trojans eight-yard-line. The vision of Young darting past a diving Frostee Rucker and into the corner of the end zone for the winning touchdown will forever be etched in my mind, and I’m sure I’m not the only one.

My most memorable Rose Bowl and moment was the 1975 Rose Bowl between Ohio State and the Trojans. The Buckeyes led 7-3 heading into the final quarter and then late in the game with things looking bleak, Trojans quarterback Pat Haden launched a pinpoint 38-yard touchdown pass to receiver J.K. McKay with 2:03 remaining to pull the Trojans within one point of the Woody Hayes Buckeyes, 17-16. As one of the 106,721 on their feet and part of a completely insane Arroyo Seco, Trojans head coach John McKay called a timeout to discuss an all or nothing two-point conversion attempt. I remember watching Haden take the snap, roll to his right, and with an Ohio State lineman in his face, virtually throw a jump pass to the back of the end zone where receiver Shelton Diggs dropped to his knees to make the reception, putting the Trojans ahead 18-17. It was a moment where time seemed to standstill. The Trojans defense then held the Buckeyes last gasp, and the victory resulted in another USC national championship. For me, it truly was the most exciting Rose Bowl game I’ve ever attended.