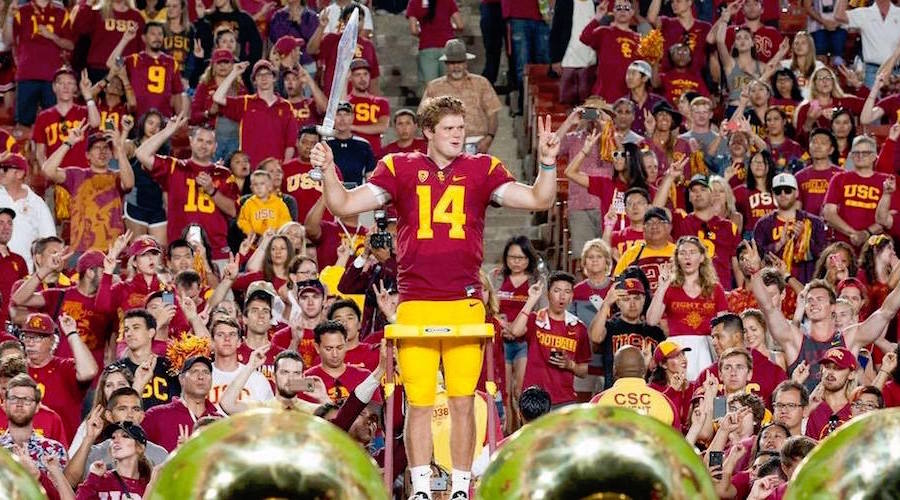 “This was a simple choice for me with the impact Darnold had not only with his play (the attacking style, the way he spreads the ball around to all the receivers, his running ability) but also with the energy that he infused throughout the entire team. He absolutely changed the course of the USC season after he was inserted into the starting line-up and it’s just been an amazing run to start his career as a redshirt freshman” – Garry Paskwietz

“Having taking the reins as the starting quarterback after a dreadful start to the season, to say that Darnold had a profound impact on the improved performance of the offense would be a gross understatement. The young redshirt-freshman wowed everyone with his unique playmaking skills right from the get-go, and not just as a passer, but also with his ability to extend plays and to pick up chunks of yardage with his feet. Completing 68.1 percent of his passes for 2,633 yards and 26 touchdowns, while also rushing for 288 yards and two more scores, he’s a legitimate Heisman candidate heading into next season.” – Johnny Curren

“CB Adoree’ Jackson was outstanding, but there’s no question that the arrival of Stevie from Utah was a monumental improvement in the interior of the Trojans defensive line and set the pace for the defense against both the run and the pass. The grad student provided the groundwork for a work ethic and maturity that laid the foundation for current and future Trojans D-linemen. No. 96 set the standard by constantly requiring double-team blocks, was a nightmare for opposing centers with his bull rush, and gave quarterbacks an anxious case of happy feet.” – Greg Katz

“If anyone represents the resiliency of this 2016 Trojan football team it is junior wide receiver John JuJu Smith.  He finished the season with 63 receptions, 731 yards and 9 touchdowns, Smith led the team for the second consecutive season but his value to the team goes far beyond statistics. His willingness to play in pain is an inspiration, and it is difficult to keep Smith off the field despite any malady. The joy Smith expresses for the game of football can be seen every time he steps on the field, and that energy is contagious with his teammates and fans alike.” – HelixTrojan

“This could have easily gone to Adoree’ considering he set the school record for kickoff returns, and for bypassing names like Curtis Conway, Reggie Bush and R. Jay Soward along the way. There could be consideration for Matt Boermeester if only for his hit on kickoff coverage against Notre Dame. But I’m going to go with the punt unit for giving up 32 return yards on the year. Of Chris Tilbey’s 46 punts, only 7 were returned and they combined for a grand total of 32 yards. That is simply amazing.” – Garry Paskwietz

“Having originally arrived at USC as a heralded recruit out of powerhouse Concord (Calif.) De La Salle, Hutchings just hadn’t lived up to the hype in his first three years on campus, compiling a total of 52 tackles, with just two starts to his credit. A more determined, and physically impressive Hutchings showed up to spring practice last March, however, and under Clancy Pendergast he blossomed into the kind of player that everyone always expected. Starting all 12 games for the Trojans at inside linebacker, he took on the role of a captain, and he’s currently tied-for-second on the team with 64 stops.” – Johnny Curren

“He probably didn’t get the attention he deserved, but junior outside linebacker Uchenna Nwosu was a force on the edge. It was never so pronounced as it was when the Trojans pulled the great victory at Washington. Nwosu was everywhere and had a huge hand in harassing UW quarterback Jake Browning and tailback Myles Gaskin. It figures that Penn State will get to know Mr. Nwosu very quickly on Jan. 2.” – Greg Katz

“Things started slowly for TE Daniel Imatorbhebhe to start the season, as it did for the entire Trojan team. But as the offense found its footing under QB Sam Darnold, Imatorbhebhe became a dangerous target in the middle of the field scoring touchdowns in four of five games during the heart of USC’s winning streak. Imatorbhebhe’s final statistics may not be eye-popping (15 receptions, 225 yards, 4 TDs), but the redshirt sophomore stepped up when he was needed the most with 5 receptions for 78 yards and a touchdown in the Trojan’s best win of the season – a 26 – 13 win at the University of Washington.” – HelixTrojan