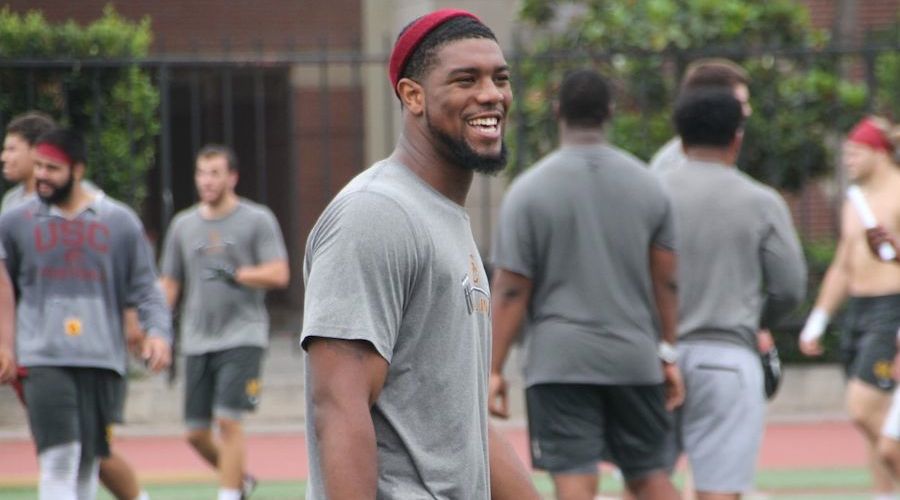 One of the benefits of off-season workouts is the opportunity to see which players have grown, physically and mentally, and appear ready to take on bigger roles.

One of those players this year has been senior wide receiver Darreus Rogers, who could pair with All-American candidate JuJu Smith-Schuster to form one of the more dangerous wide receiver duos in the nation.

The main thing I’ve noticed from Rogers, going back to spring ball and continuing through the summer, has been how mature he seems on the field and in command of what he is doing. His production has been steady throughout his career (22 catches as freshman, 21 as sophomore, 28 as junior) and it wouldn’t be a huge surprise to see him reach his personal goal of doubling the number of catches he had last year.

“Being a senior, it makes a lot of difference in terms of how comfortable I am with everything, I know my assignments and I’m able to play naturally,” Rogers said. “It’s like high school all over again. The game has slowed down a lot. I’m not out there tensed up at all, I’m relaxed, I’m loose, I’m having a lot more fun.”

Part of that maturity is also physical as Rogers, who stands 6-1, has worked hard in the weight room to get himself ready for his final season as a Trojan.

“I’m at 215 right now, it’s basically the same weight I played at last year but I’m more toned up, leaner, more explosive. I feel a lot stronger this summer and I can’t wait to showcase that in camp.”

As the veteran, Rogers finds himself now as the one giving advice to a group of five freshmen receivers who represent the future of the position.

“There’s a lot of great talent,” Rogers said. “These guys remind me of myself coming out here with just raw talent, they aren’t mentally ready yet but they still make a lot of plays. I’m able to teach the young guys to be ready, you never know when your opportunity is going to come because anything really can happen at any time.”

There aren’t too many players who understand that anything can happen at anytime more than the group of Trojans who have been a part of the program in recent years, from sanctions to coaching changes, and that makes it easy to understand the basic goals Rogers has set for the team in the coming year.

“I just want to win man, trying to get a Rose Bowl or a national championship. It’s my last year so I want to make it a great one for me and my team.”