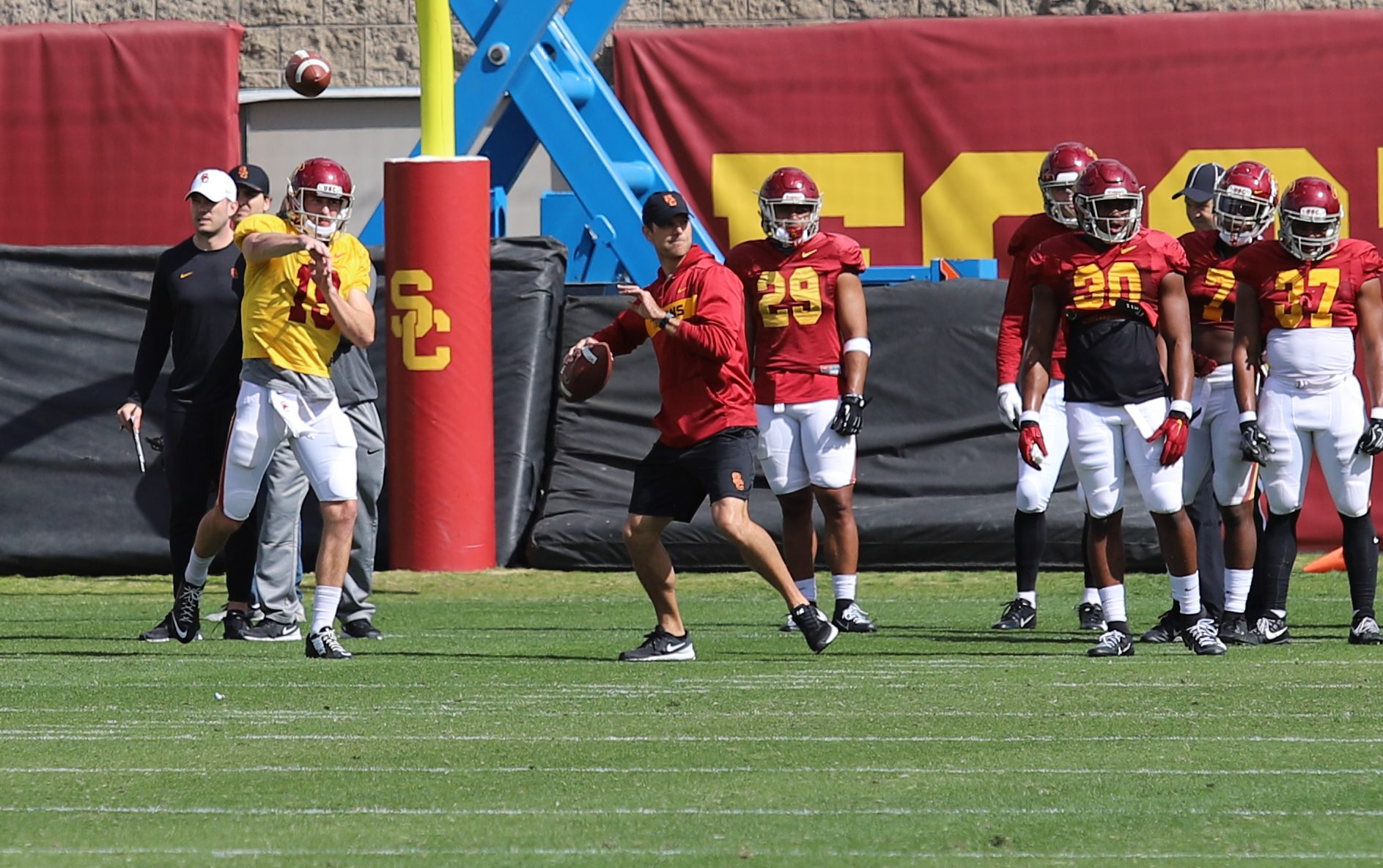 Ever since starting left tackle Austin Jackson announced last week that he would leave school early for the NFL Draft, head coach Clay Helton has had quite a run of success in keeping his team intact. Wide receiver Tyler Vaughns, defensive tackle Jay Tufele and left guard Alijah Vera-Tucker have all announced they will stay at USC for the 2020 season, and now, it appears offensive coordinator Graham Harrell will add his name to that list.

Bruce Feldman of The Athletic reported Monday morning that, despite interviewing for the Philadelphia Eagles offensive coordinator position, Harrell is expected to remain with the Trojans.

USC is also expected to soon name its defensive coordinator. According to a report by Yahoo’s Pete Thamel, the Trojans will tab former Texas defensive coordinator Todd Orlando. Orlando has also coached at Houston, Utah State and FIU. Technically, Orlando would be coming from Texas Tech, where he was hired earlier this month as an assistant head coach and linebackers coach.

Orlando was let go by Texas head coach Tom Herman this past December after the Longhorns put together a subpar defensive performance. Texas was dominated through the air last season and allowed 30 points in a game six times, including 48 to Kansas. But the Longhorns dealt with injuries on defense at a rate that might have surpassed what the Trojans went through last season, and Orlando has a reputation of being able to get strong performances out of his defense during his first year on the job. And that could be enough for the Trojans, as a team that needs to see a defensive improvement match what Harrell and the offense did in 2019.

Keeping Harrell would be a big win for the Trojans, as the improvement on that side of the ball from the 2018 season was obvious from the start of the season. Giving quarterback Kedon Slovis and his wide receivers another offseason in Harrell’s Air Raid offense should mean even more production this fall. Questions remain along the offensive line, where USC will need to find new starters at both left tackle and right tackle. And finding a receiver top step into the sizable void created by Michael Pittman (101 receptions, 1,275 yards in 2019) will be key.

Defensively, the Trojans return a ton of talent for Orlando to potentially work with, as USC loses defensive end Christian Rector and middle linebacker John Houston Jr., but brings back everybody else of note. Orlando is known as an aggressive defensive coordinator who utilizes a 3-4 front and quarters secondary. But he’s also known for being able to adapt scheme to his personnel. He’s run multiple looks on defense at different stops, but the one constant is his desire to find different ways to bring pressure. The Trojans have the players to play either a 3-4 or 4-3 up front, so it will be interesting to see what Orlando would do this spring. He’s also worked with a 3-2-6 defense to combat some of the more high-powered passing offenses in the Big 12.

USC’s defensive backs were incredibly young in 2019, but the experience they gained playing through some growing pains should help them a ton playing in Orlando’s defense, as they’ll be called upon to hold their own while extra pressure is sent at the quarterback.

Defensively, Texas ranked 58th in scoring defense in 2019, while USC ranked 72nd. Texas allowed 138.9 rushing yards per game (35th overall), compared to USC’s 162.4 yards per game (64th overall). But it’s pass defense where Texas really struggled, allowing 292.5 yards per game in the Big 12 (and with LSU on the schedule), which ranked 125th overall. USC, by comparison, allowed 246.2 yards per game though the air, which landed them 93rd overall.