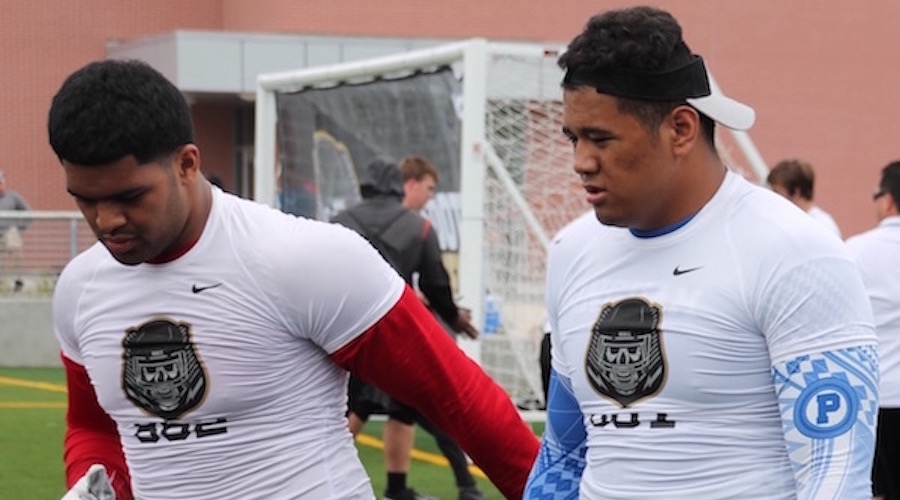 Garry Paskwietz: Johnny – with just over a week to go until signing day there is still a lot up in the air with the USC recruiting class, although things are also narrowing down a bit. Before we start breaking it down, give an overview on where things stand with current commit numbers and available spots.

Johnny Curren: As it stands now, USC has a total of 16 pledges – 4 of whom are actually already enrolled. With a total of 23 rides to fill in this class, that means USC has 7 spots available. They also have one blueshirt commit in offensive lineman Jalen McKenzie, but his scholarship will count towards the Class of 2018.

Garry Paskwietz: And there was a verbal this weekend from Brandon Pili, a defensive tackle who is 6-4, 310 with great power and size. Should be a good run stuffer in the middle. He’s a little raw so there is some development that will need to go on with Kenechi Udeze but i really like the commit (especially when combined with the other rumors of Marlon and Jay, which we will get into after we discuss Brandon). Did you see the video of Pili leading the Haka prior to the Polynesian game? He is definitely a “first guy off the bus” kind of presence.

Johnny Curren: I did. He certainly looks and acts like someone you want on your team. And that’s particularly the case in the Trojans, who need all the help they can get up front on defense. He’s a big body who likely projects to nose.

Garry Paskwietz: And Pili could be just the start of a pretty dramatic change of fortunes for the interior of the USC d-line in recent days. We knew there was a chance Pili could commit, and we knew Jay Tufele was coming for an official visit with legitimate interest, but what we didn’t expect was the fact that Marlon Tuipoulotu would be coming on an official visit. Marlon and Jay (photo above) have developed a friendship through the recruiting process but Tuipulotu had been a longtime UW commit and there weren’t any signs of him flipping. Johnny Nansen has stayed on top of Marlon, however, and got him to take a trip (which goes against UW policy of commits taking other visits) and it has resulted in a lot of speculation about him not only flipping to USC but to do it quickly and potentially be here as an early enrollee. EE or not, it would be an amazing coup at the end if the Trojans can somehow get both Tuipulotu and Tufele in this class, and it looks like it could happen.

Johnny Curren: It certainly does. As you mentioned, there is a lot of talk right now that Tuipulotu could be a Trojan very soon. I was really impressed by what I saw of him in San Antonio while he was gearing up for the U.S. Army All-American Bowl. Really explosive and quick for a player his size. I can definitely see him contributing early if he does land at SC. The Trojans certainly look to be in a stronger spot to land Tufele as well, but don’t count out Utah yet. They’ve always figured to be USC’s biggest competition, and he’ll visit the Utes this weekend. The Trojans still aren’t out of the race for Aubrey Solomon either. Michigan figures to be in front there, but USC isn’t giving up.

Garry Paskwietz: I agree on Utah with Tufele, i am not counting them out at all. Any other interesting news coming out of weekend? Besides Marlon and Jay the only uncommitted guy was Levi Jones and I know you’ve long thought the Trojans had a real shot. Other than that it was all committed guys.

Johnny Curren: Yes, when it came to the committed recruits, it sounds like the trip helped solidify most of those guys. I spoke to Randal Grimes, who visited Nebraska last weekend, and he’s all USC after his visit and shutting things down. Following Jones’ visit, I still feel great about USC’s chances, even with the recent push by Florida. Arizona commit Tony Wallace, however, did reaffirm his pledge to the Wildcats following his trip to USC, although that could have something to do with the dwindling room in the Trojans’ class right now as much as anything.

Garry Paskwietz: And the Wallace news leads us into this weekend because right now there are only two confirmed visitors for this weekend in Hawkins teammates Joseph Lewis and Greg Johnson. The Wallace news is related to Johnson, since both of them play corner, and there is probably only one corner spot left (USC has not been in communication with Deommodore Lenoir and he did not take an SC visit). I’d be very happy to end up with these two Hawkins guys, no doubt about it.

Johnny Curren: Absolutely, two elite players right in USC’s backyard, they’re the kind of guys that the Trojans have always built their program on. For Lewis, it still looks like a Nebraska-USC battle, with Oregon trying to squeeze in there, but the Trojans have all the momentum. Johnson is down to USC, Oregon and Nebraska. He just visited the Ducks, and all three of his finalists will be in-home with him this week. I like USC’s chances there as well. There could still be more visitors added to the list at USC, but we’ll have to see. Oklahoma commit Tre Brown has discussed coming in this weekend in the past. K.J. Jarrell was going to visit this weekend, but fresh off the heels of his visit to ASU, he’ll now announce his decision this Wednesday, so I think it’s safe to say this weekend’s visit is likely off.

Garry Paskwietz: It’s hard to say that Lewis is “under the radar” considering he’s a top 5 guy at his position but he definitely doesn’t have the spotlight on him as much as some other recruits, but he’s a tall receiver who can play. OK, to wrap this up, let’s each give our thoughts on how we can see the final 7 spots play out. You go first.

Garry Paskwietz: My list mirrors yours, and the only thing I would like to add is Josh Falo. Of course, for that to happen it would mean 8 rides, so something would have to change with the current commit list. And that could easily happen, after all this is recruiting. Should be another fun ride. Talk to you soon.