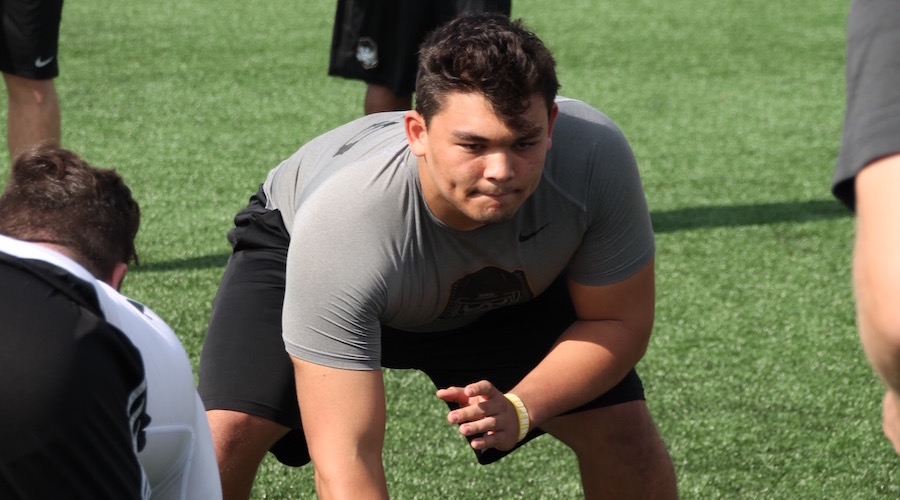 The Trojans are awaiting word from one of the top offensive linemen on the wish list as Brett Neilon (photo above) is scheduled to announce his college choice later today.

Neilon (6-2, 280) is ranked #178 in the ESPN300, and is thought to be choosing from between the Trojans, Washington and Michigan. He’s considered to be one of the top center prospects in the country although he could also play guard if needed.

USC recently had another versatile Santa Margarita lineman on the roster in Max Tuerk, who played all three line positions in his Trojan career and was drafted in the 3rd round by the San Diego Chargers in the recent NFL draft.

One of the top local defensive lineman on the wish list is Martin Andrus from Los Angeles HS and he released a top 10 last week with the Trojans on it.

Andrus (6-1, 280) is ranked in the ESPN300 and has a lot of similarities in his game to former Trojan Mike Patterson with a quick first step and stout frame.

The Elite 11 finals were held this past weekend in Redondo Beach to see which players advanced to The Opening in July. Jack Sears made it, as did Tua Tagovailoa and Tate Martell, while Chase Garbers did not.

Sears continues to list the Trojans among his top options with UCLA, Utah and Washington, while also saying a summer trip is planned to Texas A&M.

Tagovailoa is a Bama commit but he continues to talk about taking official visits, with USC being a school that is mentioned. The Tide took another QB commit in this class yesterday with some speculation about how that might impact Tua but the Hawaiian took to Twitter immediately to welcome the other QB to the Alabama class.

As for Martell, there doesn’t seem to be any real mutual pursuit with USC these days but he is still listing the Trojans among his top 5 schools recently (USC, Ohio State, UCLA, Cal, Colorado) and there is always a chance Oregon could be an option if they offer.

Click here to watch footage from the event, including shots of Max Browne

One of Martell’s former receivers at Bishop Gorman, and a guy who lived with Tate’s family for several years, is Tyjon Lindsey, who is now at Corona Centennial. Lindsey has proven this spring that he is among the most explosive players in the country in the slot receiver role.

Lindsey will make his college announcement on August 22nd with nine schools on his final list.

Keep an eye on an offer that was made last week to Brendan Radley-Hiles, a class of 2018 defensive back from Calabasas.

Radley-Hiles is another former Bishop Gorman player who has settled in nicely at a California school. He’s not a big guy (5-9, 165) but he brings some unique athleticism to the position. I’ve seen comparisons on the board to Nickell Robey and I think those are valid.