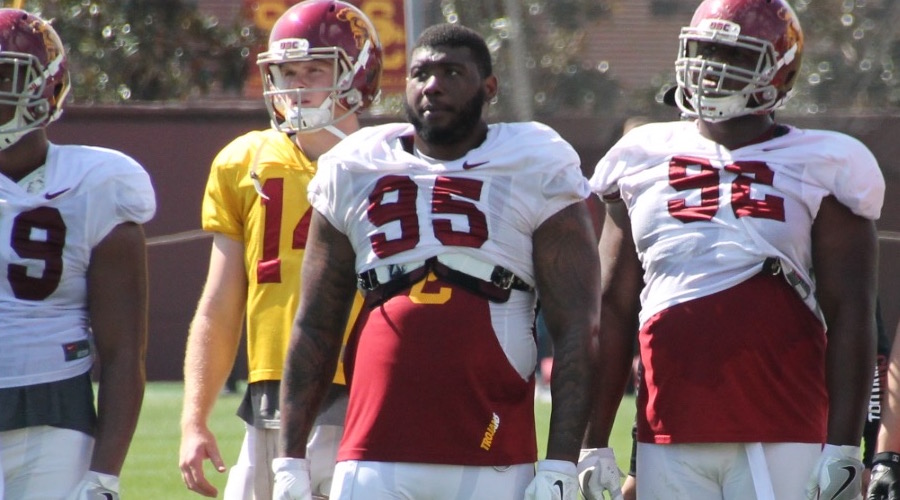 Kenny Bigelow took some limited reps during drills in the Thursday USC spring ball practice as he celebrates a milestone today, it’s not only his 22nd birthday but also the one-year anniversary since he underwent knee surgery that cost him the 2016 season.

How did it feel to get back on the field, even if it’s not a full-time role yet?

It feels real good to knock some of this rust off. Just staying safe. It’s been a year out of surgery and I feel real good, my body feels great, but I’m still going through some rehabbing and maintenance stuff. It’s just a precaution and I know where the coaches are coming from on this one, I’m not arguing with them too much.

I’ll just go out to a dinner with family, friends, nothing too big.

Are you going to be working at nose or at tackle when you get back?

I’ll be taking reps at both spots, nose and tackle. There really aren’t too many differences between the two spots in our scheme. I’ve been learning both of them during the off-season and I know them fairly well. I can simulate some things from the drills but I’ll need to get that live speed in the fall.

Talk about the experience of having to sit out last year.

Terrible, it was terrible, to be honest. Having to sit and watch all over again. At the same time, I got to watch a lot of guys transform themselves right in front of my eyes and that was something I’m glad I got to see. I went to most of the road games. That Washington game, the atmosphere in that place was electric and when our guys started marching and started coming back, that was big-time up there.

Who are some of those guys who have transformed?

Uchenna is a guy who is getting better with every rep. Wole is another guy, he’s got a lot of “want-to” right now, he wants to get better. Jamel Cook, I told him that if he ever learns this playbook he’s going to be a dangerous guy, and he’s certainly showing that right now. I’m happy for Marlon, I’m glad to see him out here doing well, that can’t do anything but help the defense. He’s running with the 1’s and I expect to see him in that role when I come back. I don’t want anything handed to me, I’m going to go out there and compete.

The coaches talk about the maturity you showed during your injury, and that Stevie T was someone you really connected with in that time.

I learned a lot from Stevie and I talk with him all the time. Mostly from the mental aspect, like never getting too up or too down. He never let anything get to him too much. He would speak up when he felt something needed to get done and I liked that about him. He didn’t come up in the Trojan tradition but he completely embraced it once he got here. Stevie was a godsend for us last year. I know there was a bit of a scramble after I went down but he stepped in and completely dominated from that nose position. That’s something I see myself doing when I get back.