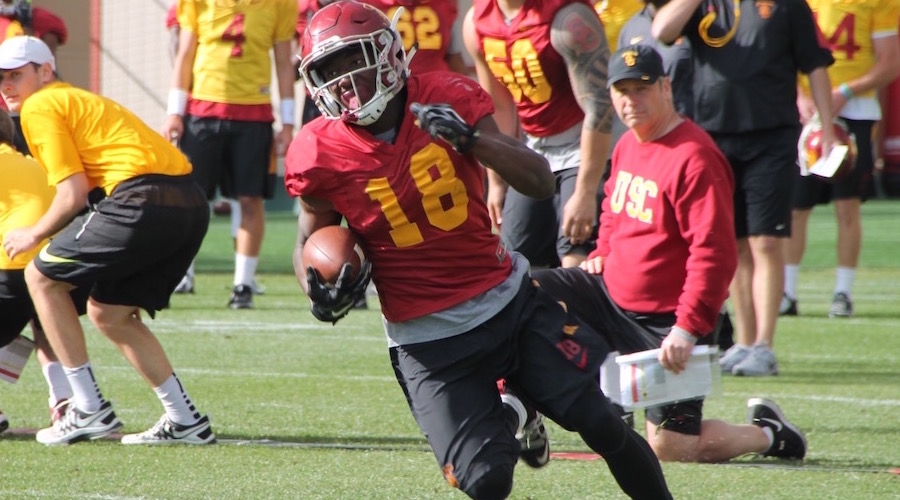 Trojan redshirt sophomore Ajene Harris was forced to sit out the 2015 season with a hip injury, and that was after being limited in action as a true freshman in 2014 due to a lingering hamstring issue. Whenever he’s been on the field, however, he’s had a habit of making good things happen and he even started a game as a true freshman (Oregon State) and had 3 catches in that game.

Ajene wasted no time when he returned to spring ball last month with some consistent performances at the slot receiver spot but there was a switch earlier this week due to depth issues at corner that saw Harris flip to the defensive side of the ball. It remains to be seen if he will stay there or eventually move back to offense but for now it’s just about trying to help the team.

WeAreSC: First of all, how is your health?

AH: I’m feeling really good right now. Every day I’m just trying to focus on my flexibility and getting stronger in the weight room.

WeAreSC: How did this look at corner come about? It seemed like things were progressing well at receiver for you.

AH: Our numbers are down right now so I was just talking with our coaches and I let them know I was able to help out on defense if they needed that. It’s pretty much just wanting to help the team and to give the offense a good look. I played corner in high school, safety too, so right now I’m just trying to get a feeling for it again and eventually I’ll get my rhythm back.

WeAreSC: Did you and the coaches discuss the length of this move?

WeAreSC: Based on what you saw previously, what do you think of the offense?

AH: I think a lot of the stuff that coach Helton and his brother are putting in are going to be good in terms of helping get different receivers open. I definitely love how the offense is.

WeAreSC: And I know you can’t know much about the defense after one day but what are your thoughts so far?

AH: I’m pretty much trying to learn the defense right now but I know I need to get better with my eyes. Everything is going fast and I know it will slow down the more I’m out here. Eventually I’ll start seeing the different concepts and I’ll know what’s coming at me, that will help me be more on the play.