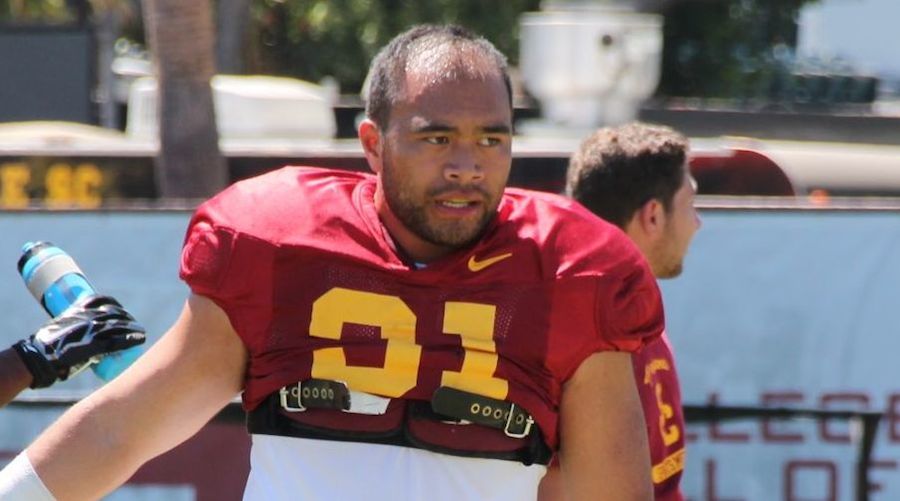 Soma, let’s talk about fall camp how has it been going for you so far?

I’m doing good right now. I mean, I’m playing some R, some F as well. Just trying to perfect my own craft at both positions and just make sure that when any of the coaches calls my number I’m gonna be able to be ready for them and get the job done. Someone they can count on. Camp is going really good. I came in healthy, lots of the guys are too. Were just hacking away at the playbook, fine-tuning things and just perfecting our craft.

Buck Allen is gone, but the Trojans remain deep at running back. Can you talk about the rest of the unit and how you, Tre Madden, Justin Davis, and Jahleel Pinner have been able to step up?

Yeah, it’s definitely different than years past. We have some depth. The older guys as you’ve said, Tre, Justin, and Jahleel and myself are just out here helping these younger guys perfect their craft and get them on the same level that we’re on. They’re young but we always play young people at this school so if they are ready they can get in there.

Coach Sarkisian mentions in the media guide specifically that you have a high IQ and are a real threat to the defense.  What does that mean to you?

It’s just something that I’ve, you now, taught myself over the years. Goals that are perfected in the playbook.  Just getting that football knowledge out there and just knowing offense and defense and being able to see different protections and reads off runs and stuff so I can be, you know, like I said that same person that they can count on at anytime at R or F.

You’re a senior now. You’ve been increasingly evolving into a more of a leadership role. Can you talk about being a senior now and specifically how that affects your play?

Yeah, I mean, I didn’t think I would come this fast. It just seems like just yesterday it was my first camp out here. When I came in my freshman year, just learning from  Rhett Ellison and all those older guys like Matt Kalil teaching me everything it means to be a Trojan, and what it’s like to have tradition at this school, just making sure that what they instilled in me about what it is to be a Trojan, I make sure I carry myself out there that way. They made sure I carry that on to the other guys, so that’s my goal. I’ve been doing that last year and this year. Just making sure I’m someone these guys can count on and come to for anything. On the field, off the field, and just teaching them those Trojan ways.

I heard you guys just saw the movie “Straight Outta Compton” last night. What did you think of it?

Oh it was a great movie. I suggest anyone to see it.

If you grew up listening to NWA, did you have a favorite artist from that group, Dr. Dre, Ice Cube, Eazy-E?

I like everyone in that group.  The movie kind of just opened our eyes to everything that was going on in their group at that time, but if I had to pick, I mean, I liked Ice Cube. He had a strong part in the movie and he was funny.  It was a good movie.