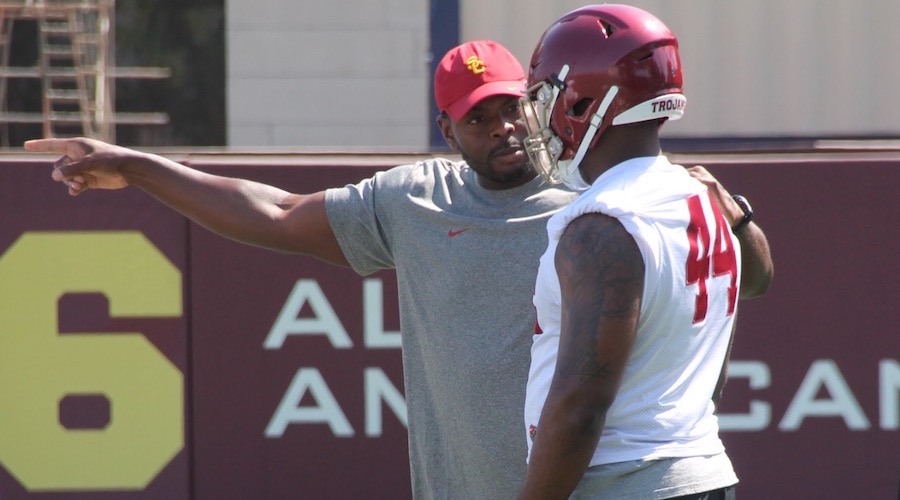 As the deadline approached last week for the underclassmen to declare for the NFL draft the Trojans had already known of three departures from the offensive side of the ball but the defense had remained unscathed, with one really big name who waited until the end to make his intentions known, Rasheem Green.

The closer we got to the deadline the more the hope grew that maybe Rasheem would decide to stay and it would give the Trojans that dominant senior in the middle of the line for what already was shaping up to be a very good 2018 defensive unit. Rasheem had seen a lot of progress last year under Kenechi Udeze and it showed with 10 sacks and 12.5 tackles for loss, it was easy to imagine him raising his game to potential All-American status in the future.

Alas, Rasheem saw that future as now and he eventually declared for the draft. It hard to blame him. He’s ready, even Udeze said as much in a social media post, and the first mock draft from ESPN’s Mel Kiper had him going in the first round with the 32nd pick to the New England Patriots.

So where does that leave the Trojans along the defensive line? Well, not too bad actually. You never want to see a talent like Green leave but when you look at the depth chart there is still a lot to like.

Let’s start with the defensive end spot vacated by Green. I think you start off looking at two options; Christian Rector and Caleb Tremblay. Rector has spent the majority of his career at this spot as a back-up to Green, but then saw his most success when he was moved outside after Porter Gustin got hurt, and he responded by earning 2nd team all-conference honors. With Gustin coming back, Clancy Pendergast has the flexibility to move Rector back inside if he wants, we’ll see what happens in spring. Tremblay comes in as a junior college transfer who is physically mature and has a motor, and spring is the perfect time to find out how he could fit in the rotation. Jay Tufele is the up-and-comer of the group, one of the redshirts I’m really looking forward to seeing in spring.

At the other defensive end spot things basically remain unchanged from last season. Malik Dorton will be the starter in the 3-linemen packages, and I thought Malik earned his stripes last year as a dependable option to put on the field. Liam Jimmons is an interesting project, he’s got such size and a physical presence but still on the raw side. Jacob Lichtenstein needs to bulk up before we can really judge how he will fit.

At nose tackle, the Trojan cup overfloweth. You lose Josh Fatu (who closed his senior year well) but you have Brandon Pili, Marlon Tuipulotu and, assuming he signs in February, Tuli Letuligasenoa. That is a whole lot of nose tackle with the possibilities of really locking down the center of the line. Marlon actually began the year rotating with Fatu before deciding to address a back issue that was said to be pre-existing to his arrival at USC. Assuming Marlon comes back heathly, we’ve seen enough to know what kind of player he can be. After he went out we had a chance to see Pili come in for the last half of the season and that was a revelation. Such an athlete for a man his size and plays with a lot of energy. They have a chance to be a special duo and if you add Tuli to the mix it gets even better.

I think one of the things I’m really looking forward to seeing with the line this spring and into the fall is the continued development that we’re seeing with Udeze as the line coach. We mentioned how Green got better, Rector was ready to go when called upon, Dorton has progressed, the freshmen held their own, etc. These aren’t all coincidences, it’s becoming pretty clear that Kenechi can coach and that gives a lot of reason for hope up front.