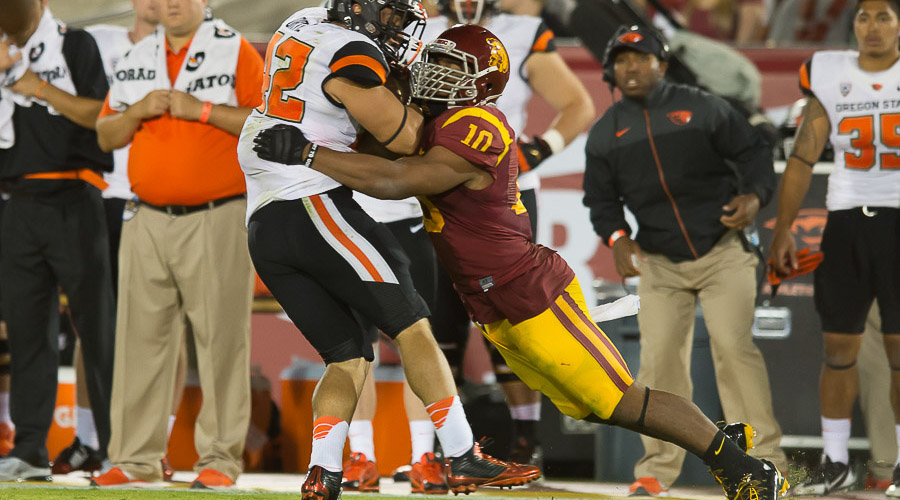 It will be the final Coliseum appearance for the Trojans seniors, including one of the most productive linebackers the USC football program has ever seen.

Hayes Pullard has been a four-year starter for the Trojans and the Notre Dame game will mark his 50th start in the cardinal and gold. Pullard is leading the team in tackles this year, the third time he has done that, and with 366 career tackles he is currently 30 tackles shy of the all-time USC record of 396, held by linebacker Marcus Cotton.

As much as his consistent production on the field, Pullard will be remembered for his style of play, which has been appreciated by those who came before him at the position.

“Hayes Pullard can flat-out play football,” said former Trojans linebacker Kevin Bruce, who was part of two national title teams at USC from 1972-75. “He knows the game, he knows his assignments, he makes his teammates better, and he’s tough. I’ve been mighty comfortable having Hayes out there as the leader of the Trojans defense.”

Here is a list of the other USC seniors who will be introduced tomorrow before their last home game:

Out of the tunnel: 2004 Heisman Trophy winner Matt Leinart will lead the Trojans onto the field prior to the game. This is the second time Leinart will perform this role, he also did it in 2013 for the Stanford game.

The Trojans will host five official visits this weekend.

This visit is critical for the Trojans prospects of landing Masina, a player who is thought to be favoring either USC or UCLA, so this will be the chance to show him a strong effort in a rivalry game at the Coliseum. Tafua is an interesting recent name on the list, a talented Hawaii defender who hasn’t received a ton of media attention but who could fit a need as a pass rushing defensive end. Settle, Smith and Jackson are all elite recruits who would be considered long shots for USC coming into the visit.

Also, versatile Utah defensive athlete Porter Gustin will be on an unofficial visit for the game.

Serra LB John Houston was discussed as a potential official visitor at one point but he will now take his USC official visit in January.