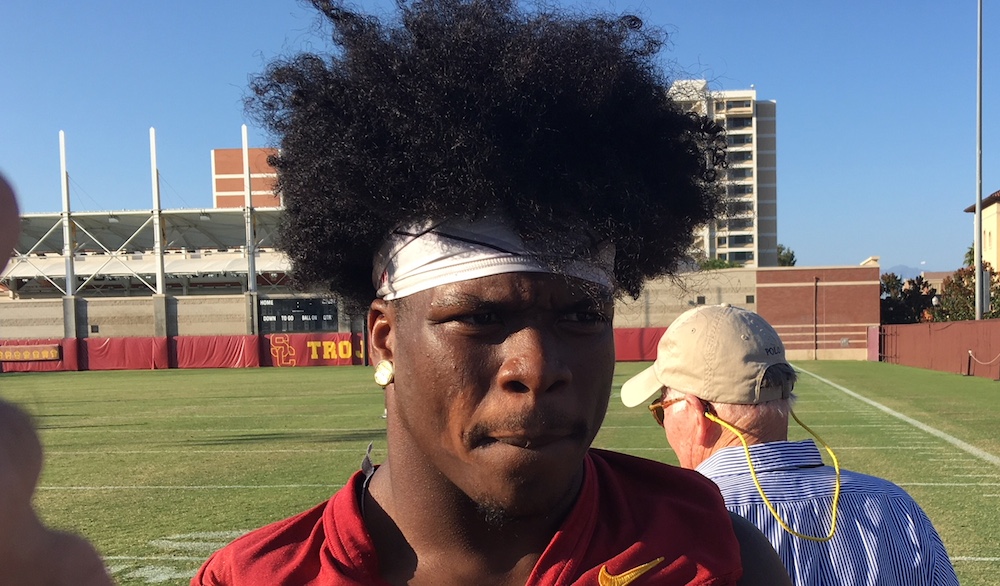 Here are the key storylines for each position group as the Trojans break camp and begin fall classes today.

QB: There has certainly been plenty of discussion about this competition. As we sit here today there has been no starter named and it looks like we won’t hear anything until after the final “mock game” on Saturday. The common thought among practice observers is that JT Daniels has done enough to be considered in the lead position but not enough to rule out Jack Sears or Matt Fink, but time is also running out to get someone named in time for game week preparation.

RB: One of the strengths of the team with three backs all capable of playing major roles (as well as a true freshman who has performed well). Aca’Cedric Ware has led the way in spring and fall, Vavae Malepeai has raised his game this year, and Stephen Carr looks healthy as he returns following back surgery. Markese Stepp is out with concussion protocol right now but has shown enough to this point to think he is going to be a good one.

WR: There are three names at the top of the rotation in Tyler Vaughns, Michael Pittman and Amon-Ra St. Brown. Pittman has been out recently so St. Brown has moved to the outside, with Velus Jones as the starter in the slot. There hasn’t been a ton of production behind that group so there is still opportunity for guys like Devon Williams, Josh Imatorbhebhe, Randal Grimes and Trevon Sidney.

TE: The season is two weeks away and we still don’t know the status on Daniel Imatorbhebhe. He’s been able to go through plenty of non-contact and walk-through drills but no contact to this point and it doesn’t sound like the coaches really know when that will happen. It’s frustrating to have this injury linger so long without any firm grip on getting it fixed, especially with how much Daniel can impact a game when he’s in there.

OL: The need for the o-line to come together is one of the top priorities for the offense but there has been a curveball recently with a string of injuries that has limited guys like Austin Jackson, Chuma Edoga, Andrew Vorhees and Clayton Bradley. That’s three projected starters and a key reserve. Things got so thin on Saturday at the scrimmage that Helton was forced to eliminate a scheduled 2:00 drill period because of a lack of available tackles.

DL: Another strength of the team. Christian Rector has been a real leader through camp while Jay Tufele has made as much of impact as anyone. Add in the fact that Marlon Tuipulotu has consistently been out there as he comes back from back surgery and Brandon Pili is ready to take that proverbial step up, and it’s clear that the Trojans are strong at the point of attack.

LB: At the moment the Trojans are down two of their biggest leaders in Cameron Smith and Porter Gustin but both are expected back soon. One of the things we’ve seen in Smith’s absence was Jordan Iosefa moving from OLB (where he is expected to start opposite Gustin) to ILB and he hasn’t missed a beat. It has also given Kana’I Mauga a chance to impress at OLB in Iosefa’s absence.

DB: Outside of the QB spot I would say the two biggest position battles are in the secondary at corner and safety. Right now Isaiah Langley is holding on to the corner spot vacated by Jackie Jones but Isaiah is facing a push from Greg Johnson. It wouldn’t surprise me if Olaijah Griffin gets in the mix before too long either. At safety, the Trojans are looking for someone to line up next to Marvell Tell, it was expected to be a battle between Bubba Bolden and Ykili Ross but Ross has missed a lot of time due to a hamstring. We’ve seen C.J. Pollard coming on strong, with Isaiah Pola-Mao and Talanoa Hufanga also in consideration.

PK: Chase McGrath is the incumbent starter and will likely hold on to the job but Michael Brown has come back strong from knee surgery and had a surprisingly good camp considering he wasn’t expected back until later in fall.

P: Reid Budrovich is back with Chris Tilbey as his back-up.

KR: Velus Jones is the incumbent and others who have worked on KR in camp include Stephen Carr, Amon-Ra St Brown, Tyler Vaughns and Michael Pittman.

PR: It looks to be a 3-man competition between Ajene Harris, Amon-Ra St. Brown and Tyler Vaughns.