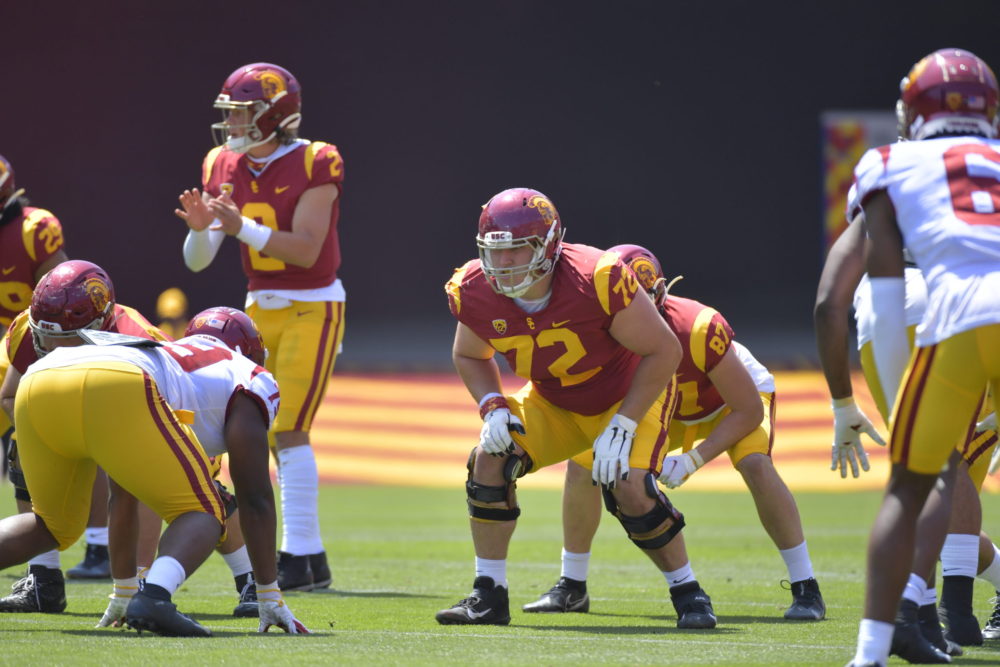 USC did not release a depth chart at the end of spring ball and won’t until the Friday before the season opener against San Jose State. Some positions are locked up or all but locked up. No quarterback is supplanting Kedon Slovis as the starter. Drake Jackson and Drake London are going to start and play as many snaps as possible. Chris Steele is going to handle the boundary cornerback role, Tuli Tuilpulotu is at defensive end and it’ll take a big-time performance from someone to unseat Ralen Goforth or Kana’i Mauga at inside linebacker.

But there are more than a few very interesting positions to keep an eye on this fall based on what happened during spring ball and what’s going to happen this summer. This does not feel like a roster with a set depth chart that can’t shuffle significantly between now and the first real snap of the season. So here’s a look at some of the most important position battles that still appear undecided or could be a major point of emphasis once fall camp begins.

Yes, the whole thing, maybe with the exception of Brett Neilon at center. During first long stretch of spring, it felt like left tackle was Courtland Ford’s job to lose, but over the second half it started to shift more towards maybe it could be Andrew Vorhees’ job to win. That’s also a spot where someone from the transfer portal could eventually be given a shot, if there’s an older guy with some experience. Vorhees looked solid at left guard, but if the mix is better with him at tackle and Ford at guard, that could be a possibility. Justin Dedich will factor in at both guard spots as well. Dedich could also push Neilon at center, and Andrew Milek is coming on strong there. Left tackle is the most important spot on the line to get right, but right tackle has just as much intrigue. Jonah Monheim spent the spring absolutely positioning himself to grab the starting spot there. If that happens, there could be an interesting battle at right guard between Jalen McKenzie and Liam Jimmons, and Liam Douglass might be ready to start pushing for time there as well.

It’s difficult to project what the starting lineup will look like right now because so much change and development can happen over the summer, but it would be surprising if the line that started the spring (Ford, Vorhees, Neilon, Jimmons, McKenzie) went out as the starters for the first practice of fall camp and stayed that way, unchallenged, until the first game.

Keaontay Ingram, Stephen Carr, Vavae Malepeai, Brandon Campbell, Kenan Christon. It’s clear that running backs coach Mike Jinks does not want to try to evenly split carries this season, which means a difficult job awaits him this fall in figuring out which back becomes the lead back and which is first up off the bench. There’s nothing that says the first guy up has to remain in that position for the entire season, but a statement will be made by whichever guy runs with that first carry. All five of these guys deserve touches this season — that’s how good Campbell and Ingram were this spring — but the coaches see that trying to do that is disruptive to any rhythm they’re trying to accomplish. It would be surprising at this point if Ingram doesn’t heavily factor into the game plan, but Carr had a great spring and Malepeai is such a solid presence back there.

If Drake London is going to be used for the most part as an outside receiver, there’s a spot opposite him that’s wide open. Gary Bryant Jr., Bru McCoy and Kyle Ford (provided he’s fully healthy) all look like solid options there. Offensive coordinator Graham Harrell has talked about needing a large number of wide receivers to run the offense, but we’ve also seen that given receivers with the kind of athleticism and physical ability as those at USC, it can work with a much smaller number since those guys can stay on the field much longer. That means grabbing a starting spot and becoming a key factor could be a huge advantage is making a much bigger impact than the guys coming off the bench. Expectations remain through the roof for McCoy and he’ll definitely play if he’s healthy, but Bryant had a great spring. The good news is that options are there and this position battle is more interesting than vital to the success of the team.

With the absences of Ishmael Sopsher and Brandon Pili this spring (Sopsher missed as he recovers from surgery, Pili was injured and will miss the 2021 season), USC turned to some young players in the middle of the defensive line — notably Jamar Sekona and Jay Toia. Both performed very well and Toia especially made it likely that he could see time this fall. Sekona can move around to defensive end, which gives him an advantage when it comes to potential playing time. It’s going to be very interesting to watch Sopsher and Toia battle it out. Sopsher does have the advantage of some experience being in the Alabama program, but Toia might have evened that out by enrolling early and participating in spring ball with the Trojans. There isn’t a more important position battle for the USC defense this season.

This looked like it would be a battle between returning starter Greg Johnson and Max Williams, but Williams is lost for the season due to a torn ACL. Without both of those players, USC turned to Isaiah Pola-Mao at the spot for the second half of spring and it sure felt like something clicked for him at that spot. He made an immediate and consistent impact there and it would seem like the coaches might seriously consider leaving him there for the season. Of course, Johnson will have something to say about that when he returns to the lineup, and that decision will have a ripple effect back into the other safety positions. Xavion Alford stepped in for Pola-Mao and played well, but clearly leaving room for improvement according to position coach Craig Naivar. The safety positions are so important in this defense, getting the right three on the field will be a big decision for the defensive coaches.

Neither Jaxson Dart nor Miller Moss really made a major statement in claiming the spot behind Slovis this spring, but one of them doing that is almost mandatory for the fall. It might be safe to call Dart ahead at the conclusion of spring ball, but not with enough cushion to say it’s decided. He definitely has the most upside with his arm strength and running ability, but getting to a point where he’s playing fast enough to make all the right reads is the next step. Moss delivered some beautiful throws this spring and absolutely has a chance to take his game to another level this summer.

Wherever Korey Foreman lines up

Defensive line coach Vic So’oto declined to say which position Foreman would start at when he arrives on campus, simply saying he’s going to be put on the field to go after the ball. But if Foreman is on the field, someone is coming off, and that’s going to be an interesting dynamic because Foreman does have the ability to play as a true defensive end or a standup outside linebacker in this defense. Drake Jackson and Tuli Tuipulotu have done enough to claim starting spots, and both Hunter Echols and Nick Figueroa have proven they can be trusted to stay on the field for long stretches. That makes Foreman’s addition to this defense one to watch, because the No. 1 overall recruit in the country is definitely going to see the field more than just a little bit this fall. As this defense implements more and more under coordinator Todd Orlando, there are likely some very interesting things that can be done with Foreman.