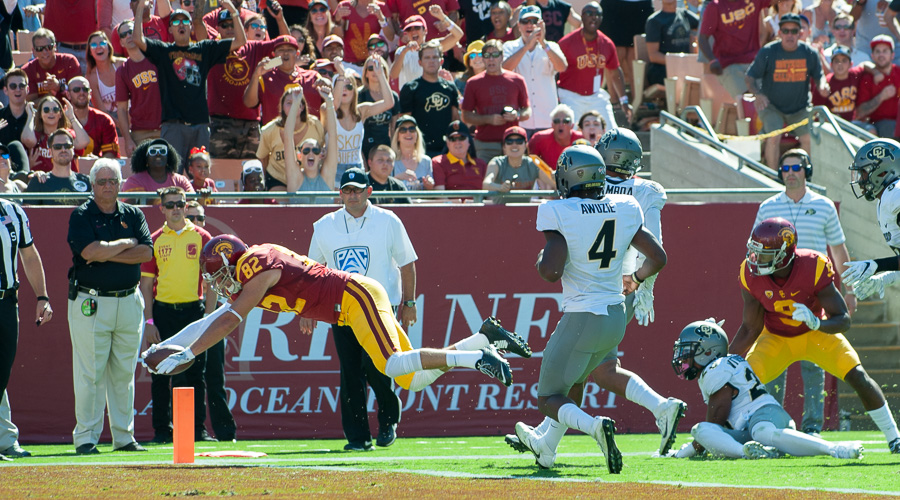 After having shown tremendous promise since way back in the spring, the USC tight end corps finally received the opportunity that they’ve been waiting for last Saturday, and they responded by coming through with a breakthrough performance, accounting for all three of the Trojans’ touchdowns in a 21-17 victory over Colorado.

For a group that has always appeared to be marked by talent, but that had compiled a total of just 12 receptions without a touchdown through the team’s first five games, the show that they put on against the Buffaloes was a long time coming to say the least.

Tyler Petite hauled in two of those touchdown passes, and while the individual accomplishment of reaching the end zone twice was obviously thrilling in itself, for the 6-foot-5, 235-pound sophomore, the biggest thrill of all was the fact that it helped the Trojans to come away with a second consecutive win inside the Coliseum.

“It was huge,” said Petite, whose only other touchdown of his career came against Oregon last season. “And personally it was really big for me, but I thought it was bigger for our team, and that’s the goal at the end of the day. As great a feeling as it is to score a touchdown, it’s even better to know that it helped our team to win a ball game.”

That selfless attitude is a hallmark of what is an extremely close tight end unit that is comprised of Petite, Taylor McNamara, Daniel Imatorbhebhe and Cary Angeline – the latter of whom is on pace to redshirt this season.

“We just support each other on the field, in the film room, everywhere,” said Petite, a product of Moraga (Calif.) Campolindo. “We’re literally just a group. That’s how we act on the field. We’re all together, and it’s really awesome.”

Making the tight ends’ showing against Colorado all the more impressive was the fact that it came with the veteran leader of the unit, McNamara, sidelined with a lower back strain.

But in a reflection of the unit’s talent and depth, the Trojans offense was able move forward without a hitch, with Petite and Imatorbhebhe more than picking up the slack.

It was Imatorbhebhe who put USC’s initial points of the game on the board as he scored the very first touchdown of his career on a 32-yard pass from emerging star quarterback Sam Darnold.

Petite’s touchdowns came on passing plays of 11 and seven yards. Darnold put his unique playmaking skills on full display on the first one, picking a fumble up off the ground before scrambling for enough time to find a wide-open Petite for the score.

“That was just such a great play by him,” Petite said. “When the ball was on the ground, and then he was rolling back out, No. 25 who is the overhang player, he just came screaming in and that just left me wide open.”

Saturday’s victory over Colorado marked the first time that two Trojans tight ends had scored touchdowns in a game since Sept. 19, 2011, when Xavier Grimble and Randall Telfer did so against Syracuse.

But the production of the USC tight ends against Colorado didn’t come completely out of nowhere. Petite, Imatorbhebhe and McNamara routinely come up with highlight-reel grabs in practice, but it just hadn’t translated to their performance on the field up until last weekend.

For one thing, the emergence of Darnold, who also happens to be Petite’s roommate. Since taking the reins as the starter in the Trojans’ fourth game of the season, he’s shown a tremendous ability to spread the ball around.

“He just progresses through his reads really well, and he really takes what’s taught in the film room out to the field – and I know that because we’re roommates now,” Petite said. “I’m obviously able to talk to him all the time, and sometimes when we talk about ball that’s what we talk about. He just does a really good job with that.”

According to both Petite and Helton, it was also about the scheme opening up against Colorado. Helton noted that with Darnold connecting more with his talented stable of wide receivers, defenses are starting to have to adjust their coverages to account for those weapons on the outside.

“I think it’s one of those things when you’re looking up there, and it’s 353 yards in back-to-back games,” Helton said. “All of a sudden that coverage may go outside to JuJu, or double up on JuJu or Darreus, and now you leave a one-on-one opportunity for a tight end on a MIKE linebacker. And those are things that we’ve been waiting to push forward, and we saw our opportunity in our last game to get some one-on-one opportunities.”

It’s a trend that Helton, not to mention Petite and the entire tight ends corps, hopes to see more of – including this Saturday against Arizona.

“It opened up last week and I hope it continues to,” Helton said. “Sam is doing a really nice job of finding them.”