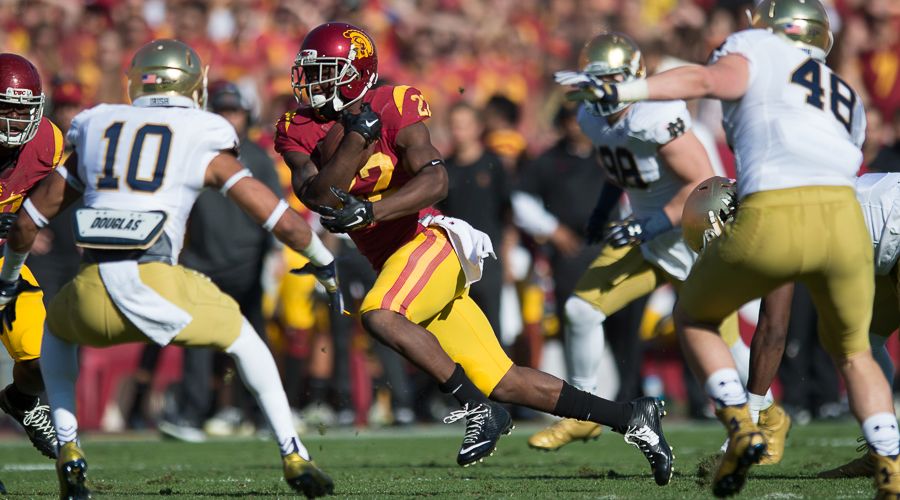 Wasn’t that fun, though?  You look up and it’s 35-0 in the first half against Notre dame, not Arkansas State or Idaho, and it brings a sort of warm glow, especially after Ucla laid a huge egg the day before on this perfect weekend.

Now it is the most disappointing season in Ucla history.  It’s altogether possible that we might land a better bowl spot than they.  You’d not be totally out of line if you called the Ucla win over SC an upset.

Let’s make one thing clear—not that we have sympathy for anyone these days—The Irish were down five starters on defense, and lost more than a few guys during the playing of this one.  But honestly, I got the feeling we were glimpsing the future of the SC offense and its capabilities once the blinders come off.

And the defense was really up the task….so much so that they chased Golson (arguably our biggest worry coming into the contest), out late in the first half!

He was under pressure a lot, and even when he wasn’t, he was sailing or threw behind almost every time.

Admit it, at 35-7 when ND scored late in the half, you were a little worried, right?  Just a little?  Until we went the distance with the first possession of the second half.

There wasn’t much to this one really….but I will remember three things.  1-Kessler became the first guy ever to throw for 6 TD’s against the Irish (joining AD’s 6 rushing TD’s in ’72—so why didn’t it say Kessler 6 times across the sports page front in the Times?  Are passing TD’s worth less?)

2-JJ and I and Jordan had one of our best broadcasts of the season, right at the right time. Everything flowed together so well, it didn’t seem rushed or forced, just like three friends talking about our Trojans.  Good job boys!

And 3-his eminence, Tom Kelly joined us mikeside for a ten-minute chat late in the third.  TK had four surgeries this summer, and lost about 70 pounds.  He finally ditched his caretakers and got to the Coli two games ago, so this time I invited him to our booth to talk about the rivalry.

He was so gracious and lovely…I know both JJ and I were entranced as was everyone in the booth who new him. There were some youngun’s who had to be told, and they seemed to appreciate his presence after that.

Tom smiled and talked of the greatness of the game overall, and then in particular, since we were celebrating their anniversaries, the teams and games and legends of 1964 and 1974.

I’ve got a lot of Tom Kelly stories, and this just adds a page for me.  What a thrill to have him on the air just one more time.

“And listen to this Coliseum crowd……….”

And so it’s time to go bowling.  Assuming as I do that Oregon will paste Arizona, SC is looking at four possibilities.  I think the Holiday is aching to have us if they can get us, and I think they will.  Against some Big Ten team like, in order, Nebraska, Wisconsin, Ohio State, Rutgers, Maryland, Iowa.

The San Francisco based bowl has similar pickin’s.  If we go Sun in El Paso it’ll be some ACC team, and of course if it’s Vegas, the Mountain West Champ, which figures to be Boise St., but could be Fresno State. If Fresno wins, we are NOT going to play them again so strike that one.

I always root for a bowl we’ve never been to, a stadium we’ve never seen and an opponent we’ve never played.  So give me Frisco vs. Wisconsin, Rutgers or Maryland, the Holiday vs. same, or Boise in  Vegas.

The men’s water polo team made short work of Whittier and now goes to this weekend’s final four in San Diego looking for NC #7 in a row.  Gotta go through Stanford to get to Ucla.  Never say Never.

Women’s volleyball got in the round of 64 and could even make the sweet 16 if they play well.  Not their best season, by any means.

Women’s hoops is roaring and should be a top 25 teams before long.

And the men win at New Mexico in The Pit.  Now THAT’S a real road win.  See if they can get a few more good ones like that during this first real season of Enfield’s system and career at SC.

Man, I feel better this time this week than this time last week.  How bout you!