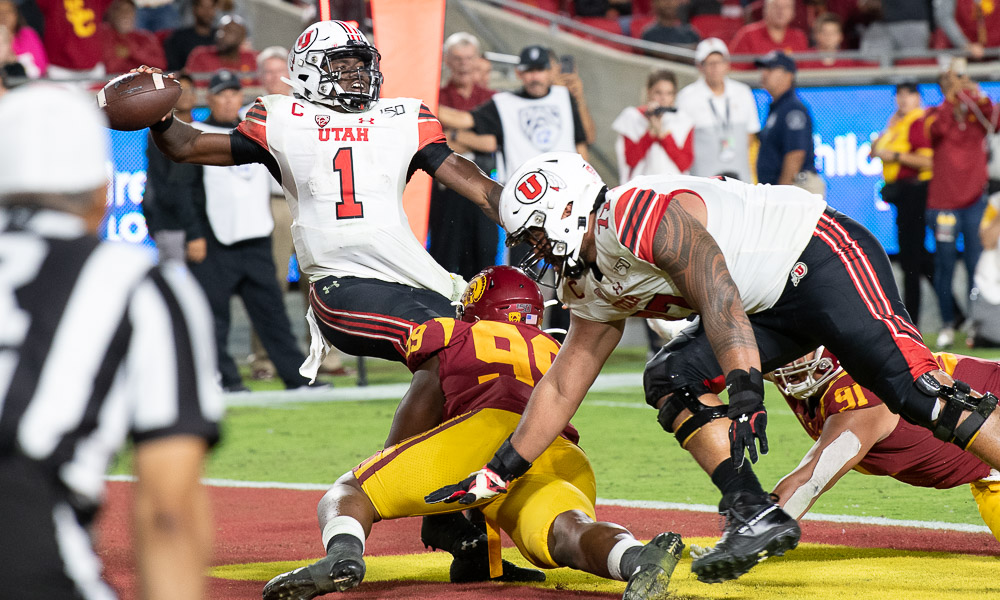 USC travels to Utah this weekend, as for the third week in a row the Trojans are set to take on a team playing its first game of the 2020 season. The big question facing Utah is just who will be ready to play on Saturday. The Utes haven’t been able to play a game this season as they’ve dealt with Covid issues. On Tuesday, Utah athletic director Mark Harlan said the Utes could have just 70-80% of its roster available for the game.

The Utes are replacing longtime starters at quarterback and running back, while plenty of experience returns along the line of scrimmage and at wide receiver.

At this point there is no indication of who will start at quarterback for Utah, as the Utes look to replace Tyler Huntley. Lisk is a former walk-on who has played minimally in six games during his Utah career. Bentley earned the starting spot as a true freshman at South Carolina before transferring to Utah. He has 33 career starts and is by far the most experienced quarterback of the group. Rising transferred to Utah from Texas, where he redshirted his one season.

None of the three quarterbacks present the running threat that Huntley was for the Utes, and it will be interesting to see exactly what this offense looks like with a new quarterback. Arizona had a new quarterback against USC, but at least there was some film on him and the Trojans had actually lined up against Grant Gunnell a bit last season. This will be an entirely new look with virtually no film to study.

There haven’t been many carries left to go around at Utah the last couple of years after Zack Moss got all of his, but Devin Brumfield and Jordan Wilmore return to the backfield looking like the one-two punch for the Utes this year. USC got extended looks at both last season when Moss was injured against the Trojans.

Brumfield finished that game with 63 yards on 10 carries and added four receptions for 28 yards. Wilmore rushed once for four yards.

Brumfield finished 2019 with 263 rushing yards and two touchdowns, while Wilmore had 194 yards and a score as a true freshman.

Both paled in comparison to Moss, who had 1,416 yards and 15 touchdowns on 263 carries. While there isn’t much experience returning here, the bet is that Utah won’t all of a sudden turn into a team that relies heavily on its wide receivers. This is a run-first offense and USC is likely to see a heavy dose of either Brumfield or Wilmore, or possibly both.

Covey had a massive game for Utah against USC back in 2015, as he caught seven passes for 129 yards and two touchdowns. The shifty slot receiver is still with the Utes following a mission and he’s looking to have a big year in 2020 after missing all but four games due to injury last season.

The Trojans were tested a bit last week by Arizona wide receiver Jamarye Joiner, who took a short pass and turned it into a long touchdown. If Covey is given that same kind of room to operate, he has the ability to generate major yards after the catch.

Thompson, Enis and Nacua are big, physical targets on the outside and they’ll challenge the USC cornerbacks. USC has missed the matchups between Arizona State and Arizona’s best wide receivers due to injury, so seeing how the Trojans perform if Thompson, Enis, Nacua and Covey are all on the field will be interesting.

Kuithe is the receiver to watch for Utah, as he led the team last season with 34 receptions and six touchdown catches. USC hasn’t been stressed by tight ends much this season, but these two Utah tight ends will be a test. USC performed well against Kuithe last season, as he had just two catches for 20 yards against the Trojans. But the year before, he had four catches for 68 yards.

Four of five starters are back along the offensive line, as Utah returns the bulk of a group that helped lead the Pac-12 in rushing yards per game in 2019. Umana is the rock in the middle, having started 25 games in his career. But the Utes have a good one at left tackle in Ford, who has 21 starts. This is a big, physical line and maybe the biggest test the USC defensive line will get all regular season.

The Utes bring back just two starters on defense, as the secondary especially was decimated by graduation. But Utah has recruited well on this side of the ball and will have talented players ready to go on Saturday.

Utah ran a four-man line against USC all game last year and completely shut down the USC running game as the Trojans ran for 13 yards on 22 carries. Some of the names are new along the line, but the talent is still there. Teams have had success in putting big, physical tackles right over the USC center and generating a push at that position. Utah has the guys in the middle to do that, if that’s what they choose to do. Losing Leki Fotu from the line is a big blow, but this will be–as always–a tough Utah defensive line. Tafua is the only returning starter from last season, but Pututau, Moala and Tupai have all played in at least 30 games at the FBS level. Pututau and Tupai at Utah, and Moala at Hawaii, before transferring to Utah.

This is where the experience lies in the Utah defense, as Sewell and Lloyd have combined for 34 starts. Lloyd was a star for the Utes last season as he led the team with 91 tackles and ranked second with 6.5 sacks and 11 tackles for loss. Sewell played in just three games for Utah last season, but he brought 19 starts with him from his time at Nevada. Lloyd will be the Utah defender to watch on Saturday, especially watching how he plays against USC’s run game.

There are zero starts among the entire two-deep secondary for the Utes, though Davis has played in 28 games and both Broughton and Mataele have reached double digits as well. There are good players back here — specifically true freshman cornerback Clark Phillips III — but the USC passing attack will be a major test for this group playing its first game together after a few weeks of intermittent practice sessions. Davis recorded 11 tackles last year, while Broughton intercepted a pass against Idaho State. Last season, USC found success against Utah’s man coverage, as quarterback Matt Fink hit Michael Pittman on a number of deep balls. USC coaches have said they expect Utah to employ a similar defense to what they’ve always run. It’ll be interesting to see if the Utah coaches trust a young secondary to consistently match up in man coverage against USC’s wide receivers.

Utah was good on special teams, but it was a dip from several years ago when Utes won three-straight Ray Guy Awards and a Lou Groza Award.

Redding connected on all 56 of his extra point attempts last season and went 10-for-13 on field goals. His long is just 42 yards, so he wasn’t tested much from distance last season. He made three of his four attempts against USC last season.

Lennon averaged 40.9 yards per punt last season and forced 21 fair catches on 44 punts. He also had one blocked.

Covey hasn’t gotten loose on a kickoff return, as his career long was a 38-yarder against USC in 2018. He returned a punt 77 yards for a touchdown back in 2015 and has averaged nearly 10 yards per punt return in his career. USC has allowed just two kickoff returns and two punt returns through two games, for a total of 49 yards.