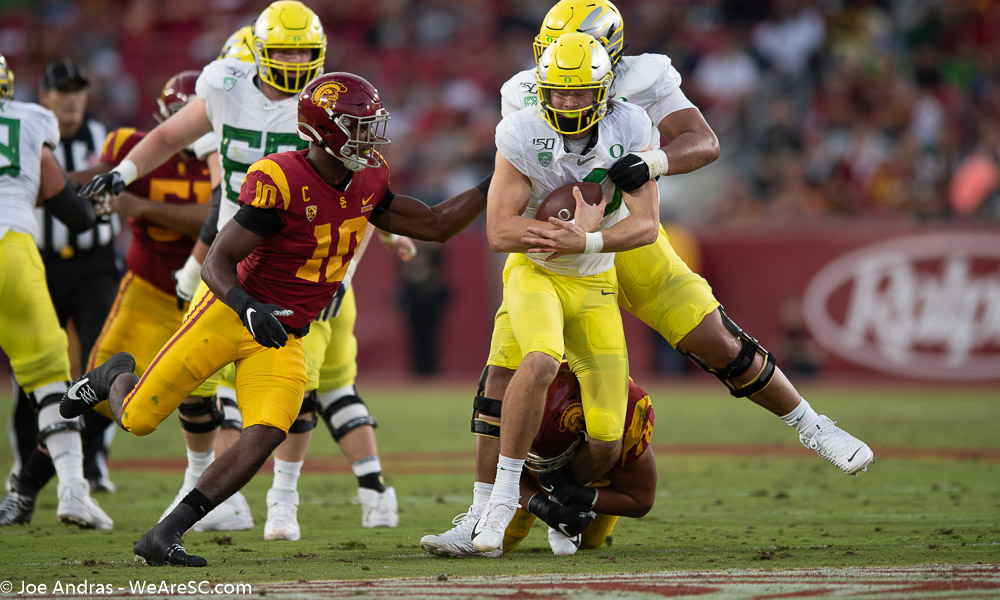 USC will take on Oregon in the Pac-12 Championship Game on Friday night at the Coliseum, as the Trojans went 5-0 in winning the South division while Oregon went 3-2 this season and will fill in for Washington as the North representative, as the Huskies were unable to play due to Covid issues.

This isn’t the Oregon team that many expected coming into the season, as the Ducks saw left tackle Penei Sewell and standout defensive backs Jevon Holland, Thomas Graham and Brady Breeze all opt out of the season. But there is still enough talent on the roster to present a sizable challenge for the Trojans on Friday evening.

Joe Moorhead took over as Oregon’s offensive coordinator this season and USC fans will remember him as the Penn State offensive coordinator who helped guide the Nittany Lions to 49 points in a narrow Rose Bowl loss to the Trojans a few years ago. There is no Saquan Barkley in the Oregon backfield, but the Ducks bring a strong running attack and some weapons outside into this game. Oregon has the top offense in the conference as far as total yards per game and ranks among the top four in rushing, passing and scoring offense

Tyler Shough (pronounced “shuck”) is a true dual-threat quarterback for the Ducks and UCLA’s Dorian Thompson-Robinson probably provided a nice warmup for the Trojans in now turning their attention to Shough. The Oregon quarterback is completing 63.6% of his passes for 1,389 yards and 11 touchdowns against four interceptions. He’s also rushed for 256 yards and two touchdowns and been sacked eight times in five games. He will provide a test for this USC defense, as he can hand the ball off, keep it himself and run, or keep it himself and then look like he’ll run but throw it outside or downfield. It will take multiple USC defenders being in the right place on every play to limit his effectiveness.

Oregon wants to win with the run game and the Ducks have two good ones in C.J. Verdell and Travis Dye. Verdell has the most carries this season, but is averaging just 4.4 yards per carry. Dye has been more explosive, with a 7.5-yards per carry average and a team-high 340 yards on the season. Dye has also been the big-play threat out of the backfield, as he has five receptions for 204 yards and three touchdowns. The Trojans were burned twice for scores by UCLA running back Demetric Felton coming out of the backfield, and Oregon’s backs pose the same threat. USC will also need to account for Cyrus Habibi-Likio near the goal line. He has just 10 carries, but leads the team with four touchdowns.

Jaylon Redd has been the top target this season, with 20 receptions for 235 yards. Former Trojan Devon Williams has seen action this season and leads the team with 264 receiving yards on just 13 receptions — a 20.3 yards per catch average.

USC allowed UCLA tight end Greg Dulcich to catch eight passes for 167 yards and a touchdown last weekend. Oregon’s tight ends aren’t usually as prominently featured as UCLA’s, but Hunter Kampmoyer is capable of doing the same if the Trojans continue to lose track down the middle. He has nine receptions for 120 yards and two scores.

Oregon suffered a big blow when Penei Sewell decided to opt out this season, but the Ducks have replaced him and the other veterans just fine. The line is paving the way for 5.3 yards per carry this season and the Ducks are converting nearly 50% of their third down situations. This is still a good, and very large, group up front for Oregon.

The Duck defense has been shredded at times this season. Oregon allowed monster rushing games to both Oregon State and UCLA, so it will be interesting to see how much USC tries to push the ground game on Friday. The Ducks rank eighth in the conference in scoring defense (though just three points more than USC, which is second), seventh in total defense and ninth in both rushing and passing defense. Oregon is allowing 184.2 yards per game on the ground, and has just eight sacks and two interceptions in five games.

Kayvon Thibodeaux is the player to watch up front as he is one of the Pac-12’s best overall players and possibly its best defensive end. He has just two sacks this season, but that’s tied for the team lead, and he also leads the Ducks with 5.5 tackles for loss. Jordan Scott has 10 tackles and Austin Faoliu has 16, as the Ducks haven’t really been able to present a stout defensive front this season.

Noah Sewell is already one of the leaders of this defense and a future star in this conference as just a true freshman. He ranks second on the team with 32 tackles and five tackles for loss, and is tied for the team lead with two sacks. If the Trojans really are going to run the ball, they’ll need to account for both Sewell and Isaac Slade-Matautia, who leads the team with 33 tackles.

There is a ton of talent not represented here for Oregon, as three of the Ducks top defensive backs aren’t playing this season. But plenty of talent still remains, as Mykael Wright and Deommodore are two of the conference’s best cornerbacks. Wright leads the team with five pass breakups. Verone McKinley has one of the team’s two interceptions, and nickelback Jamal Hill has four pass breakups. Oregon is typically very comfortable letting its cornerbacks match up against opposing receivers, so it will interesting to see how much the Duck coaches allow for man coverage and how often they drop back into zone and try to frustrate the USC offense. These players might be talented, but no secondary can hold up in man coverage for an entire game against USC’s passing attack.

Oregon’s kicking game was dreadful to start the season, but they’ve figured it out a bit recently. There haven’t been many big plays either way, but there are some talented players who drop back deep for the Ducks. This was an area that helped swing last year’s game, but it feels like USC has fixed the issues here this season.

Lewis started the year kicking field goals but went just 1-for-4 and Katleman has gone 2-for-2 since stepping in, though the makes were just from 21 and 33 yards away. Lewis continues to handle kickoffs, though he has just five touchbacks on 30 kicks, so USC’s return team should have an opportunity to return all or most kickoffs.

Tom Snee is averaging 43.2 yards per punt and has forced eight fair catches and allowed just one touchback on 17 punts this season. Opponents have been able to generate some return yards though, with 65 yards on six returns.

USC knows how dangerous Wright is as a returner, as he took one back 100 yards to completely change the game last season. He has a 41-yard return this season but has been mostly limited, as he’s averaging 21.1 yards on 12 returns.

Dye has just three returns this season, but is averaging 13.3 yards.