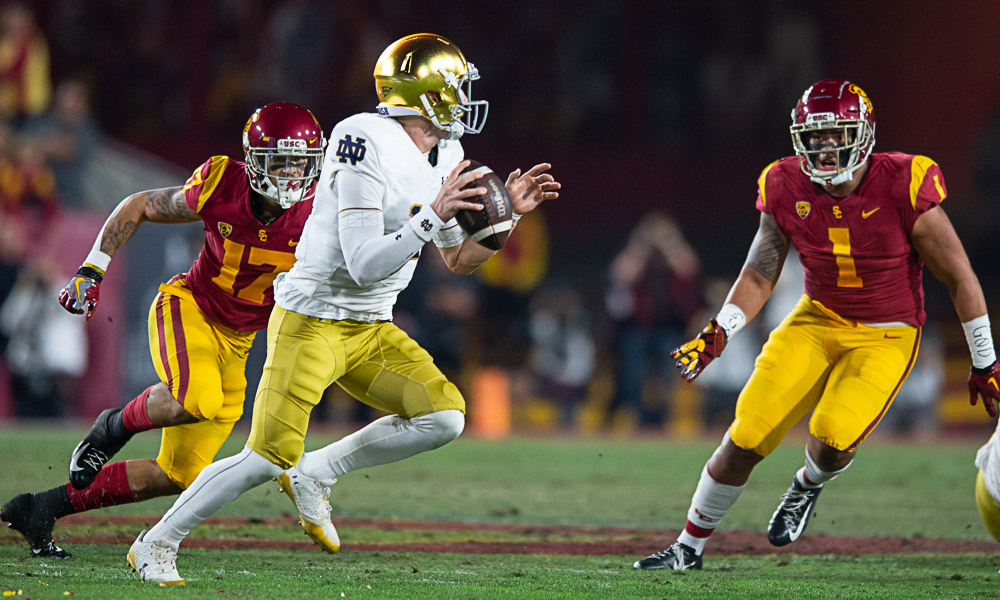 The USC Trojans head to South Bend, Indiana this weekend to take on the No. 9 Notre Dame Fighting Irish. Notre Dame sports a 4-1 record this season, is coming off a 52-0 win against Bowling Green and possesses a balanced offense combined with a fast and aggressive defense.

USC head coach Clay Helton called Notre Dame quarterback Ian Book a game manager during his Tuesday press conference, and that is an accurate description for the Fighting Irish signal caller. Book isn’t going to be the most talented passer or runner that USC will face this season, but if he limits his mistakes and plays within the system, he can be a frustrating opponent to try to contain. He is completing 65.5% of his passes, for 1,254 yards and 13 touchdowns against just two interceptions this season. He is also a threat on the ground, as he has 139 rushing yards and two touchdowns. While he isn’t a threat to take something 75 yards the way Arizona’s Khalil Tate can, Book is very good at finding the right time to pull the ball away from his back and get upfield to move the chains and keep a defense from keying on running back Tony Jones Jr.

Jones has been the Notre Dame ground game this season, as he’s rushed for 381 yards and four touchdowns on 55 carries. Notre Dame can get Jahmir Smith and C’Bo Flemister involved as well, but stopping Jones will be the key. It will be interesting to watch whether Notre Dame runs motion or misdirection at USC, as previous opponents have done to varying degrees with some success.

Through the air, the Trojans will have their hands full with wide receiver Chase Claypool and tight end Cole Kmet. Claypool leads the team with 24 receptions for 347 yards and four touchdowns. Kmet, in just three games, has 15 receptions for 204 yards and two touchdowns. USC has faced some really good tight ends this season and, for the most part, has don’t a good job limiting their overall production. This weekend will provide another significant test at that position. No other player has more than 10 catches this season.

Up front, this Notre Dame offensive line is very good, but maybe not one of the great units the Fighting Irish have had in recent years. Certainly, running against the Georgia front seven is a chore, but Notre Dame managed just 46 yards on 14 carries against the Bulldogs. Against New Mexico and Virginia, the Fighting Irish recorded 157 yards on the ground on 38 and 37 carries, respectively. Though they did manage six total rushing touchdowns in those two games. If USC can stop the run the put the game in Book’s hands to win it with his arm, that will go a long way toward setting the Trojans up for success.

Notre Dame simply does not beat themselves offensively. Fighting Irish running backs haven’t lost a fumble since the end of the 2015 season (1,211 carries) and the rank No. 2 in the nation in turnover margin, at +2.00 per game.

This is a Notre Dame defense playing with a lot of momentum right now, as the Fighting Irish haven’t allowed an opponent to score more than 30 points over their last 19 games. Notre Dame has gotten after the ball on defense as well as any team in the country, as they rank tied for No. 3 overall in turnovers gained, with eight fumble recoveries and six interceptions. Overall, Notre Dame has given up some rushing yards this season, as Louisville and New Mexico both went over 200 yards on the ground in the season’s first two games. But Notre Dame got back on track against Virginia, allowing just four rushing yards to the Cavaliers, and they are allowing 3.7 yards per rush this season.

Where Notre Dame can really cause problems for USC in the running game is the ability to get into the backfield and brings plays down behind the line of scrimmage. Notre Dame has 45 tackles for loss this season, nearly double what their opponents have. On occasion, USC’s wide running plays can get strung out and stopped for a loss if an attacking linebacker finds a seam through the offensive line. USC will need to find an answer there, because the Trojans won’t be able to play from behind the sticks all game against a very good secondary.

Safety Alohi Gilman leads the way for the defensive backs with 29 tackles, an interception, a forced fumble and a fumble recovery. Fellow safety Jalen Elliott has six career interceptions, and cornerback TaRiq Bracy leads the team with five pass breakups this season.

Up front, defensive ends Khalid Kareem and Julian Okwara can cause havoc in the passing game, as they’ve combined for nine tackles for loss and 6.5 sacks this season.

Overall, this is a very good defense that has caused problems for every opponent this season. USC has the weapons to move the ball through the air and on the ground, but it is going to take a great (not just good) game from the offensive line, and probably the first turnover-free game from the USC offense in more than a year.

Doerer has been asked to kick just four field goals this season and has made three, with his miss coming from 47 yards out against Virginia. He’s also forced 18 touchbacks on 32 kickoffs, and opponents are averaging less than 16 yards per kickoff return.

Bramblett is averaging 41.5 yards per punt, with 10 forced fair catches on 22 attempts, including eight that have pinned opponents inside the 20-yard line. As with kick coverage, Notre Dame has been very good on punt coverage as well, allowing just 2.9 yards per return, with a long of nine yards.

Finke has a 25-yard return this season, but nothing much else to speak of, as he’s averaging 8.3 yards on his six returns.