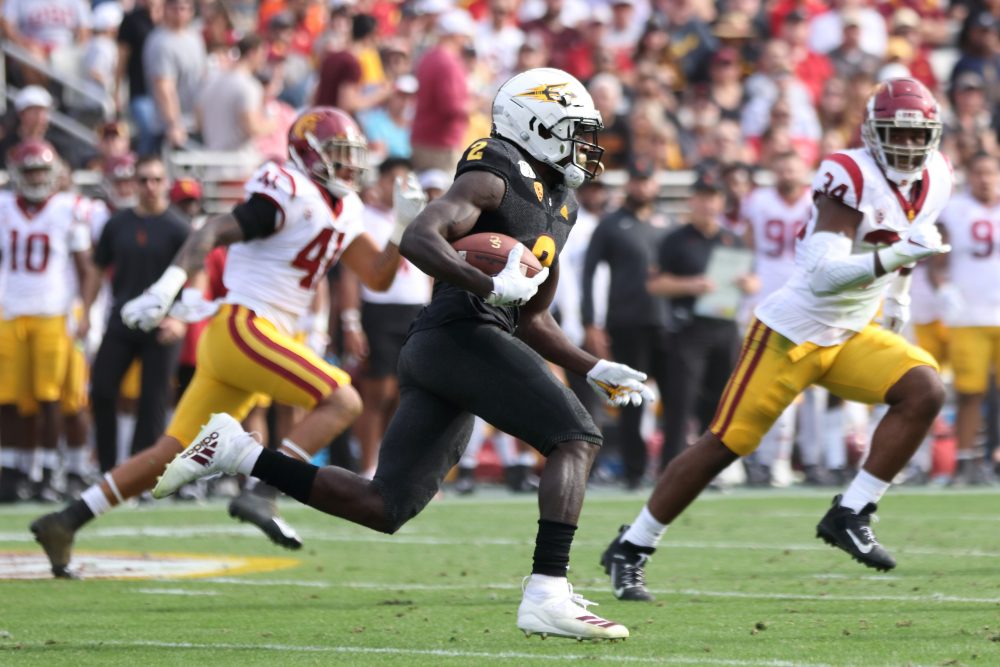 USC’s 2020 season kicks off on Saturday morning, as the Arizona State Sun Devils come to the Coliseum. It’s the first game in the Pac-12 this season but it might be the biggest one, as the Trojans and Sun Devils are expected to compete for the Pac-12 South title and the winning team on Saturday will have a significant advantage over the loser in the race for a spot in the conference championship game.

Arizona State is led by head coach Herm Edwards, who will be flanked by new coordinators on both sides of the ball. Offensively, Zak Hill comes over from Boise State, where he led a successful and balanced offense for the Broncos. On defense, Arizona State has co-coordinators in longtime Cincinnati Bengals head coach Marvin Lewis and former New York Giants linebacker Antonio Pierce.

Daniels and USC’s Kedon Slovis are universally regarded as the top two quarterbacks in the conference. Daniels was terrific last season as a true freshman, completing just over 60% of his passes for 2,943 yards and 17 touchdowns against just two interceptions. He also rushed for 355 yards and three scores.

Arizona State’s offense is likely to go as Daniels goes this year, and USC’s defense will have a big test right out of the gate. He’s effective as a passer and a runner and he’ll carry a large burden this season as Arizona State is looking to replace their leading rusher and receiver from last season. Daniels will be looking to find a connection with new playmakers quickly.

Eno Benjamin is off to the NFL, so Arizona State will need to replace a 1,000-yard back and will look to do so with three (or more) players who have never had a carry at this level.

Junior college transfer Rachaad White and true freshman Chip Trayanum share the co-starter notation at the top of the depth chart. White checks in at 6-foot-2, 195 pounds, while Trayanum is 5-foot-11, 230 pounds. Both have been impressive during fall camp and USC should probably expect to see all the backs — including true freshman Daniyel Ngata — on Saturday.

Darby burned the Trojans for two touchdowns last season and was a big-play threat all year for Arizona State, averaging nearly 20 yards per reception. He had 31 catches for 616 yards and tied for the team lead with eight touchdown receptions. He has great speed and will again be a threat on the perimeter.

Pearsall had just seven receptions last year and they’ll be joined by a couple of true freshmen looking to make an impact. Johnny Wilson and LV Bunkley-Shelton were both USC targets at various points during the 2020 recruiting class and the Southern California products will be coming back home looking to have a big first game against USC. Wilson is listed at 6-foot-7, while Bunkley-Shelton is a smooth route runner. Both will test the USC secondary.

Hodges caught five passes for 58 yards last season as Arizona State did not use the tight ends in the passing game extensively.

The surprise came at right tackle, as redshirt freshman Ben Scott gets the nod over LaDarius Henderson, who played as a true freshman last season. Dohnovan West returns as arguably the best lineman for the Sun Devils, while former Stanford lineman Henry Hattis was a big pick up as a grad transfer. Left tackle Kellen Diesch is another grad transfer, as he made his way over from Texas A&M.

Arizona State will shift from a 3-3-5 into a four-down front this season, but Lewis and Pierce are likely to have more than a few wrinkles ready for the USC offense and coordinator Graham Harrell.

Jermayne Lole led the team with 6.5 sacks last year, to go along with 10 tackles for loss. D.J. Davidson was a big contributor, with 51 tackles, and he’ll be asked to do more this year. Whether Arizona State can get pressure from the outside will be an interesting thing to watch for, as Forman and Matus played in just seven games total last season and had 16 tackles combined. USC will also likely see defensive end Tyler Johnson, who had 2.5 sacks and 5.5 tackles for loss.

Robertson and Butler are the two defensive players to watch as they can control a game. Butler led the team with 88 tackles and had six tackles for loss. Robertson finished third on the team with 74 tackles and had an interception. Both players had three forced fumbles last season. Kyle Soelle steps into a starting spot this year after tallying 18 tackles and a sack last year.

Fields is the leader in the secondary. He finished second on the team with 84 tackles last season and added two interceptions and two fumble recoveries. Crosswell had two interceptions and Lucas had one. Jones began his career at USC before transferring to Arizona State, so there will be an added level of intensity in that matchup.

This is a very good set of defensive backs and they’ll challenge the USC wide receivers. It’s a good test for this USC passing attack to start the season.

Zendejas made 23-of-27 field goals last season, finishing the year on a strong note by going 10-for-10 against Oregon, Arizona and Florida State to close the season.

Turk is one of the best punters in the nation and finished the 2019 season averaging 46 yards per punt. He averaged 63 yards on five punts in the season opener last year and against USC, he punted six times and averaged 48.7 yards on each.

A couple of newcomers man the kick returner spot, but this is an area where Arizona State really hurt USC last season. Brandon Aiyuk averaged 56.3 yards on three returns, including a 97-yarder that led to a score. This is a spot where USC needs to come out strong and have a good performance against ASU.

Aiyuk handled a majority of the punt returns last season, so the Sun Devils will likely turn to Jones this year. It’ll be interesting to see how USC uses punter Ben Griffiths this season and if he’s asked to send the ball farther downfield instead of focusing on positioning and placement. If he is, how will USC fare covering those deeper kicks?