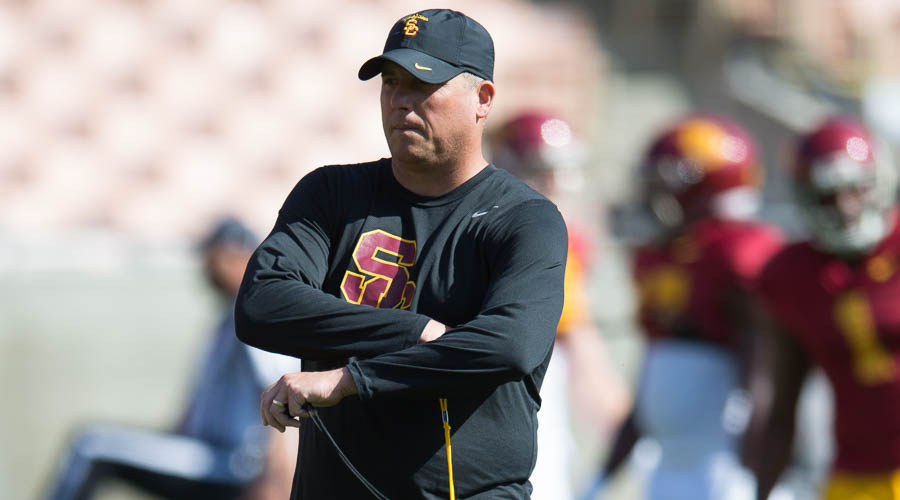 The Obvious: USC Trojans head coach Clay Helton (above photo) has announced that he’ll wait until training camp in August to name his starting quarterback.

The Not So Obvious: And why shouldn’t he? He’s not fibbing when he says that junior Max Browne and redshirt freshman Sam Darnold are that close after spring ball competition. Sure, Helton knows it would probably be best in the team’s best interest to name his quarterback with spring ball having just been completed, but Helton also knows in a bigger picture that his credibility is also on the line for all other position battles, as well, on the team. When he sells his players that the best guys play – regardless of grade level and that competition will decide it – it’s all about credibility and Helton certainly has gained some with his gutsy decision not to name a starting quarterback.

The Obvious: The easy way out and politically correct move for Clay Helton would have been to just name upperclassman Max Browne the starter.

The Not So Obvious: However, Sam Darnold proved this spring the gap was not wide enough to just hand it to Browne, and Clay Helton should be given credit for taking the stance he did. He also knows that Browne, whom he personally recruited, has put in his time and is deserving of a starting shot. Helton, however, also knows that Darnold hasn’t taken a backseat to Browne thus far in the competition. And, BTW, don’t think for a minute that new Trojans athletic director Lynn Swann isn’t watching in the background how the quarterback situation is being handled.

The Obvious: As a sophomore at Troy “averaging” 20.9 yards per catch on 26 receptions, Lynn Swann was more than just a contributing member of the legendary 1972 national champion Trojans.

The Not So Obvious: Ironically, Swann played on a team in 1972 that had some preseason quarterback controversy. At the time, Mike Rae, a veteran senior, was being hotly pursued by a celebrated young sophomore QB named Pat Haden, who had about as much publicity as you could ask for coming out of La Puente (Calif.) Bishop Amat. Head coach John McKay decided it was best for the team to have the experienced Rae at quarterback with Haden as his backup. The rest, of course, is history as Rae evolved into a tremendous quarterback on perhaps the best college team ever.

The Obvious: There will be quite a quarterback battle in training camp to determine once and for all the starter against Alabama.

The Not So Obvious: By not naming a starter between Max Browne and Sam Darnold, Clay Helton has also put himself on the stress clock. It figures that Helton knows he has to name a starter not long after being in training camp. However, what if Browne and Darnold remain equal after the first couple of weeks in training camp? You can bet that Browne will get the nod, but that doesn’t guarantee he’ll be the starter the rest of the way.

The Obvious: While Max Browne and Sam Darnold are getting the bulk of the publicity, there are also two rising signal callers that could be factors down the road.

The Not So Obvious: Those other two QBs are sophomore Jalen Greene and true freshman Matt Fink. Fink is a few seasons away from truly contending, but Greene was one of the major surprises during spring ball. Many felt that Jalen would have been better served remaining at wide receiver where he was very effective in 2015 – even using his quarterback skills to throw passes from the wide receiver position. If Greene played in a conference like the Mountain West, he’d be one of the league’s more dynamic performers. Jalen has improved so dramatically at quarterback, he may yet have a future as a USC quarterback, especially if Max Browne departs early.

The Obvious: Spring practice has now been completed, and now there is the long wait until training camp in August.

The Not So Obvious: If the time between the end of spring practice and the beginning of training camp in August isn’t torture for most rabid USC football fans, the O/NSO doesn’t know what is. So, it’s probably time to head to YouTube and/or the DVD shelf and watch some classic USC games. Might we suggest watching the 1975 Rose Bowl against Ohio State in which the Trojans won in the final minutes with a Pat Haden to J.K. McKay pass and the ensuing and dramatic two-point conversion to Shelton Diggs. And, let’s not forget the efforts of WeAreSC analyst Kevin Bruce, who was a stellar linebacker that season and in the Rose Bowl.

The Obvious: The Trojans had an estimated 22,000 fans in attendance for last Saturday’s Spring Game in the Coliseum.

The Not So Obvious: Ohio State had its Spring Game last Saturday in Ohio Stadium and the official attendance was 101,189. Of course, if you watched some of it on the Big Ten Channel, the “Horseshoe” appeared to have plenty of seats in the upper corner levels.

The Not So Obvious: It was the feeling of the O/NSO that first-year head coach Neil Callaway wouldn’t play favorites or go by what he saw on film of the 2015 O-line. The current selection of Chris Brown over incumbent Damien Mama is a warning shot to all of the O-line that there are no sacred cows. No question that the offensive line play has picked up under Callaway, and it figures once centers Toa Lobendahn and Khaliel Rodgers return, the competition will be become even more intense.

The Obvious: The lack of depth along the defensive line remains is a major cause of concern.

The Not So Obvious: Certainly it was questionable prior to the injury to junior Kenny Bigelow, but it’s really mindboggling just how little depth there is going into the 2016 season. The Trojans coaches aren’t trying to hide it; they’re just as concerned as you are regarding the state of the situation.

The Obvious: The Trojans charged fans $10 for game-day admission to the Spring Game in the Coliseum.

The Not So Obvious: UCLA will hold its Spring Game on Saturday in UCLA’s Drake Stadium and will charge $15 for game-day admission.

The Obvious: There will be a number of new rules for the 2016 college football season.

The Not So Obvious: This season, the rules committee passed a rule that takes effect inside two minutes in the half. This new rule requires that the clock be started on the snap if the team ahead in the score commits a foul. Under the current rule, the clock would be started on the ready-for-play signal, allowing the fouling team the chance to gain a time advantage by running perhaps 20 or more seconds off the game clock. The new rule prevents this.

The Obvious: Former Trojans tight end Bryce Dixon as been sentenced to six years in state prison for a series of crimes.

The Not So Obvious: Boy, where did it all go wrong; Dixon had NFL written all over him. Accepting no contest plea bargains for car jacking, counts of second degree robbery, and the use of a knife, one just wonders if it at some point it could have all be avoided.

The Obvious: And finally, the Trojans and Alabama held their Spring Games on the same day and the same time in their respective time zones.

The Not So Obvious: Alabama coach Nick Saban was dressed in a coat and a tie for his spring game while Trojans head coach Clay Helton wore a red USC hat, white collared shirt with a “USC” logo on the left breast, and long tan pants. How’s that for different approaches to a spring game?